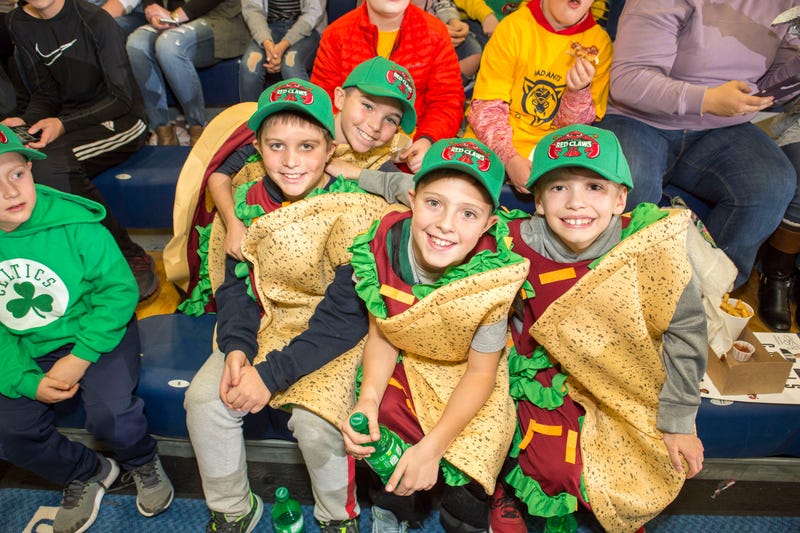 PORTLAND -- It’s better than two hours before the tip-off of the Red Claws home opener Friday night and deep in the bowels of the venerable Maine Expo Tacko Fall is finishing off a pre-game snack. It’s a predictable spread of chips, fruit and assorted sports drinks, but just two flights above there’s a far more spicy menu.

Dressed as a trio of tacos, three teens from Seabrook, N.H. look like they should be spinning two-for-one sale signs outside of your local Chipotle, not working their way through a turnstile at G-League basketball game.

"You have to represent the Taco," Jon Belanger, 17, explains with a broad smile of his attire and his two guacamole-glazed friends. He dropped $40 at his local Party City for the ensemble and he is eager to get an up-close view the player he has been tracking from afar the last two years.  “I have been following him since college and there was no way I was going to miss this.”

Suffice it to say, Belanger is not alone.

The Red Claws have sold out their first two games this season for the first time since 2012 and you need look no further than one Elhadji Tacko Sereigne Diop Fall for the major reason why. Measuring anywhere from 7-foot-5 to 7-foot-7, depending on who you talk to, this import from Senegal by the way of the University of Central Florida has taken Maine, and all of New England for that matter, by storm.

Not originally part of the Celtics master plan

"Tacko has been quite a phenomenon and it kind of reminds me of 'Lin-sanity,'" Celtics President Rich Gotham muses of the global craze that engulfed Jeremy Lin as he miraculously woke up a previously comatose New York Knicks organization back in 2012. "I have been thinking of what to compare it to and that’s the closest thing that comes to mind."

Gotham was on hand at the home opener Friday night in Portland not just to keep tabs on Fall, but to see first hand the entire Red Claws operation. The Celtics purchased the team outright in July after having a hybrid affiliation with the Red Claws since 2012. The thought process behind the acquisition was to make a good product even better while giving new Celtic draft picks like Romeo Langford and Tremont Waters, who Like Fall are on two-way contracts with Boston, valuable minutes. Gotham figured the sale would elevate all aspects of the Red Claws’ organization but admits that he was not able to anticipate the rocket-like trajectory once they signed the 310-pound Fall, who curiously went undrafted in the 2019 draft after a solid four-year career at UCF.

For instance, Gotham and the rest of the Celtics brass probably couldn’t have anticipated that game day tickets for Friday’s home opener against the Fort Wayne (Indiana) Mad Ants would be going from anywhere from $70 to over $200 online. Yes, we’re talking about minor league basketball here.

"It’s exciting to see all the energy and buzz in the building," Gotham added. "I was just standing over by the merchandise stand and you have people lined up for Tacko Fall and Tremont Waters jerseys.

"We were always a big believer in what they had going on up here with such a strong community asset and what we hope is that the Celtics could bring a little more to it in terms of resources, expertise, and of course players."

Maine Red Claws president Dejuan Eubanks says you have to go back to the team’s inaugural season in 2009 to find the same kind of buzz at the Expo. Capitalizing on their rabid fan base, "Crustacean Nation," the Red Claws sold out the intimate venue in each of their first two seasons, but have not been able to replicate that success since.

"This is very reminiscent of the first two years where they rallied around us and the game of basketball in the state," said Eubanks, a former Harlem Globetrotter and D1 player, who at 6-foot-9 is the only member of the Red Claws organization who is within earshot of their star attraction.

"It’s just been wonderful to see the community come alive once again around basketball. We’ve always been lucky to have a good crowd, but tonight there was just extra energy in the building."

With  25 minutes to tip-off Friday they were literally printing money at the Red Claws merchandise counter. Manned by three staff members, the team figured that they had already outfitted no fewer than 25 Crustacean Nation fans with Fall’s No. 99 Red Claws shirt, which not surprisingly tends to run a tad large. At $69.99 a pop, no one in this Crustacean Nation seemed to be batting an eyelash, let alone an antenna, at the price -- especially Judy Angsten who made the one-hour trek from Sidney Maine to catch a player she has been following long before the Celtics scooped him up.

"I’m a college basketball freak so Tacko has been on my radar ever since the last two years at UCF," said Angsten. "I absolutely love this environment! I’m in the nose-bleed section, but that should put me right at eye level with Tacko."

And with a capacity of just under 2,500 in the cozy 105-year-old building which has played host to such luminaries as JFK and Janis Joplin there really isn’t a bad seat in the house.

When the Maine attraction hits the floor for warmups in tear-away sweats that look more like capri pants, the nation -- and the entire building -- pulsates with every layup. In a business that’s all about accommodating rather tall athletes, these are indeed unique times for the Red Claws staff which is doing its best to make the necessary alterations for a player whose wingspan (8-foot-4) is almost as long as a Prius. The club even installed new California King mattresses in Fall’s and his roommate Tremont Waters’ two-bedroom suite -- an upgrade that’s more than ample for the 5-foot-10 Waters, but still a tad short -- like his warm-up pants -- for Fall.

Don’t expect the easygoing Fall to complain about his bare ankles anytime soon, however. According to Waters, Fall unfailingly greets the throng of autograph seekers that swarms the duo whenever they head out for a bite to eat at the Maine Mall with a welcoming smile. Friday’s outpouring of support by Crustacean Nation, however, may have caught him a little off guard.

"I got here around 4:30 and I was really surprised at how loud it already was," Fall noted. "It just shows you how much they love the Red Claws up here."

That affection hit a crescendo at the 8:27 mark of the first quarter Friday when Fall checked in for Red Claws’ starting center Yante Maten and promptly blocked -- with his elbow -- the first of six Mad Ants shots on the night to the roar of the crowd. Moments later, he made 7-foot-3 Mad Ants center, Hasheem Thabeet, look like a wing player as he easily grabbed a miss over the former UConn star’s head and put it back in for his first bucket.
Courtesy Maine Red Claws

While there is still plenty to work on in terms of footwork, stamina and finishing at the rim, it’s clear that Fall has the athletic prowess to be far more than a glorified lamp post in the paint like so many other 7-foot-3 and taller projects have been over the years.

"I had always heard people say that he doesn’t move too well, but to be honest I think he can definitely move well on the court, especially for someone of his size," Langford points out.

And that movement, especially from the top of the key on pick and rolls is already making Fall quite popular with the Red Claws backcourt.

"He did a great job rolling and he was taking the defense with him which was leaving us open for a lot of layups and threes," lauded Red Claws’ first-year coach Darren Erman after watching Fall put up 16 points, 13 boards and six blocks in Friday’s win against the Mad Ants. Perhaps even more impressive to the 5-foot-8 Erman who comes up to about his center’s navel, was Fall’s recognition of pick and rolls on the other end of the floor.

"His pick and roll coverage was as good as anyone you will see in the NBA," said the coach.

Fall, who shot an NCAA-best 74 percent from the field over his four years at UCF, followed up Friday’s contest with a perfect 9-for-9 effort from the field and 21 points in the Red Claws’ (3-0) in over the Raptors’ G-League entry Sunday.

Despite the gaudy stats he knows that trips down to Causeway Street may be few and far between for now as he works on his stamina and surviving Erman’s frenetic practices.

"I feel I’m doing pretty well, especially after the first couple of practices which were really intense," Fall noted. "I’m not where I want to be, but I can definitely see improvement."

"Fans want to see him and there is such a curiosity factor there," Gotham added. "We’re happy for him. He’s such a good kid and such a hard worker. Even though he has this kind of cult following he knows that he’s up here to get his work in and get better and make the NBA."

Fall, who made his NBA debut earlier this month against the Knicks at Madison Square Garden, knows it’s a matter of baby steps, regardless of the fact that his size 22 hightops are the ones doing the stepping.

"I see a steady amount of improvement each time with the Celtics I just need to keep getting better and having fun with the process," he noted.

With that the center zipped up his custom made, 4-foot long Canada Goose jacket, which was presented to him before his NBA debut and prepared to brace the chilly Maine evening and the remaining fragments of Crustacean Nation. There’s no word yet if the high-end clothier plans to come out with a fur-lined taco jacket anytime soon, but if they do Belanger is definitely interested.

"I’ll definitely come back," the six-foot teenager said on his way out of the Expo with his taco outfit in tow. "Just walking by him on the bench you had to seriously crane your neck to see him. It was amazing. Yeah, I’m definitely coming back."