In an offseason where many organizations are expected to pinch pennies because of COVID-19, the Toronto Blue Jays apparently plan to zig, hoping to gain an edge on more traditional contenders who zag this winter.

With eight teams in each league reaching the postseason in 2020, the Blue Jays snuck into the postseason, going 32-28 in the pandemic-shortened season. Still, the organization is well aware that the Tampa Bay Rays and New York Yankees aren't going anywhere anytime soon, and the Chaim Bloom-led Boston Red Sox could turn around in relatively short order as well. So it doesn't appear that Blue Jays' general manager Ross Atkins plans to rest on his laurels after a successful 2020 campaign.

On the latest edition of "Big Time Baseball," RADIO.COM MLB Insider Jon Heyman says that the Blue Jays have interest in the top two center fielders on the free-agent market, George Springer and Jackie Bradley Jr.

The Blue Jays made the first notable transaction of the offseason this past weekend, re-signing lefty Robbie Ray, who they acquired during the 2020 season, to a one-year/$8 million deal. Vladimir Guerrero Jr. claims to have lost north of 30 pounds since this past summer, giving the organization hope that he can return to third base in 2021. And the team's top free-agent signing last winter, Hyun-jin Ryu, is a finalist for the American League Cy Young Award.

With quite a bit of positivity in Toronto, it makes sense that the team is looking at two former World Series Champions to fill a position of need.

Springer, 31, is a former World Series MVP that can play both center and right field. While he does bring the baggage of the Astros' sign-stealing scandal with him, he still had a tremendous 2020 season, slashing .265/.359/.540 with 14 home runs, 32 RBIs and a 1.9 fWAR. He also continued his postseason dominance, homering four times and driving in 10 runs as the Astros reached the ALCS for the fourth consecutive season.

While Astros' general manager James Click has expressed a desire to retain Springer, it's unclear if that will ultimately come to fruition. Justin Verlander will likely miss the entire 2021 season and Zack Greinke is entering a contract year, so the starting rotation is very much in flux. Additionally, shortstop Carlos Correa, who is five years younger than Springer, can become a free agent after next season, and presumably the Astros would like to mount an attempt to re-sign him.

Tim Dierkes of MLB Trade Rumors has projected that Springer will sign a five-year/$125 million deal this offseason. Springer is expected to decline the one-year/$18.9 million qualifying offer that the Astros extended to him, setting the team up to receive draft compensation if he departs in free agency.

From the Blue Jays' perspective, not only would adding Springer improve their lineup, but it could prevent the division-rival Red Sox from doing so. When we examined potential landing spots for Springer earlier this month, the Red Sox were mentioned.

Of course, if Springer goes elsewhere, the two American League East foes could find themselves competing for Bradley Jr., one of the better defensive outfielders in recent memory. While Heyman says that the Blue Jays are interested in the 30-year-old, WEEI's Rob Bradford reported over the weekend that the Red Sox - along with the Astros and "one American League Central team" - have reached out to Bradley Jr. about a free-agent contract.

Bradley Jr. would be more of a short-term commitment than Springer, with MLB Trade Rumors projecting that the former Gold Glove Award winner will land a two-year/$16 million pact this offseason. 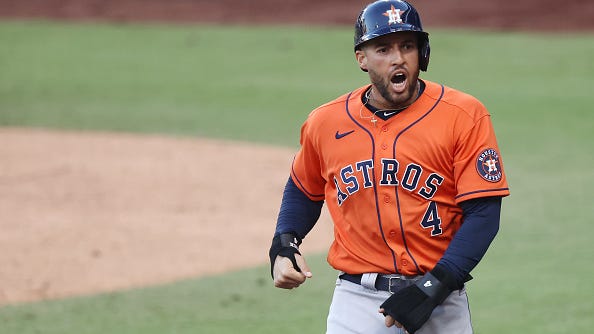