There are some moments throughout a baseball game the fans, players and broadcasters simply can't refrain themselves. A long home run. A throw from the outfield. A fastball topping 100 mph.

And then there is Garrett Whitlock's changeup.

The story of Whitlock is one of the better ones in what is becoming a flurry of unique tales for these 2021 Red Sox. The Rule 5 Draft pick, and former property of the Yankees, has emerged as a legitimate weapon out of Alex Cora's bullpen. (For a closer look at how the Red Sox landed Whitlock, click here.)

In his introduction to Major League Baseball, Whitlock has struck out nine of 22 batters faced, allowing just three hits while not giving up a run or walking a single batter. It is a package that includes a 96 mph sinking fastball, which is delivered by the 24-year-old's athletic 6-foot-5 frame.

But what really has separated Whitlock, eliciting the "oohs" and "aahs" along the way, is that changeup.

There have been 28 thrown by the pitcher so far this season, getting swings and misses on the pitch 46 percent of the time (and on all four thrown Wednesday in Minnesota).

So, how did this pitch come about? The story starts in spring training.

"I want to give him credit to adapting," said Red Sox pitcher Matt Andriese regarding Whitlock. "This game is all about confidence, so the more confidence you can give to somebody who is trying to get their feet with the comfortable they are going to be and the more success they are going to have."

The confidence, and excellence, started taking root with simply some casual conversations between Andriese -- a 31-year-old righty who signed with the Red Sox as a free agent this past offseason -- and the wide-eyed, open-eared Whitlock.

Andriese had established himself as one of the better changeup-throwers in the game, having learned the art of the pitch from current Tampa Bay pitching coach Kyle Snyder. (Snyder, as it turned out, had picked up the intricacies regarding the offering from Zack Greinke while the two were in Kansas City.)

"In spring training, him being a Rule 5 guy, you're soaking it all in," Andriese told WEEI.com. "Trying to learn. Trying to get your feet wet. Trying to make the team. I noticed from Day 1 his stuff was really good. I started playing catch with him probably two or three times every five days. We kind of had similar schedules, so I started playing catch with him and I was just talking to him about his changeup.

"I felt him out early on. It wasn't like, 'Hey, this is what you need to do.' His changeup was good already. We had some good conversations about it, about the mentality around it, the arm speed. Nothing to do with the grip."

The grip was that of a simple circle-changeup, which Whitlock had been throwing since his college days. That wouldn't change. What would was the mindset involving the pitch.

"He told me more recently ... He went back and looked at my previous outings in the big leagues and me using my changeup," Andriese noted. "He visually saw the arm-speed behind it, the mentality, when to use it. It was just a process throughout spring training where we slowly worked on the pitch itself. It wasn't like, 'This is how I hold it. You need to do this.' It was just helping a younger guy out, helping his way through spring training.

"He has such a good fastball. We're totally different pitchers. I learned my mentality behind my changeup during my time in Tampa. I had a good changeup coming up through the system, but I finally learned to use it when I was in Tampa."

Confidence. Strategy. Delivery. These were the finer points that Whitlock would be siphoning from Andriese each time they talked.

Describing the art of the pitch isn't always easy. But for those actually throwing it -- like Whitlock and Andriese -- you just know what is right and wrong. So far, there has really only been a whole lot of right.

"Having conviction in the pitch. Trusting it," Andriese said in what he prioritizes. "Because a lot of guys, they get the grip and they want to throw it like a fastball. That's a cliche growing up. Saying, 'It's just a different grip. Throw it like your fastball.' You have to know when to throw it, the location where to throw it. Going back to Garrett, I would see his changeup and it had a lot of depth to it but he was trying to throw it in the zone, middle. I told him, 'Why don't you have the mentality of killing the spin on it. So you finish on your arm side which creates a little bit extra drop.' It's a hard thing to explain because it's such a feel pitch.

"I would always talk to certain people about it, but I think once I got here I was a little more comfortable I'm my surroundings. I've bounced around with different organizations through trades and stuff like that and been in the big leagues for some time now. I felt like a guy like Garrett, who is a Rule 5 pick, he was soaking in all the information he could get. I really clicked with him. He's a hard-working kid. A great guy. Wants to be the best he possibly can be. I always like to talk to people like him because they like to learn. Some guys are more stubborn than others, but he wants to take that information from guys who have done it and put it into practice." 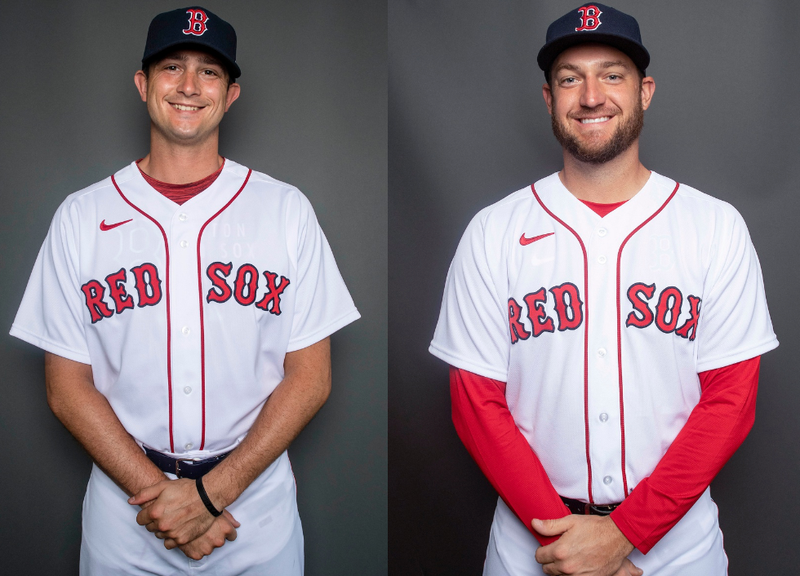 Andriese's changeup has been very good for years now and is the topic of a handful of online articles because of it's gyro spin. pic.twitter.com/1dhALwa0eV