Frank Robinson is the only player in MLB history to win MVPs in both the American League and National League, but it's entirely possible that a scalding-hot month of May could propel Mookie Betts into being the second member of that exclusive club.

Betts already has an AL MVP on his resume in 2018, which he won as a member of the Boston Red Sox. In 2020, his first year with the Los Angeles Dodgers, he finished runner-up to his now-teammate Freddie Freeman for the NL MVP.

And if there was any remaining doubt about whether Betts was still one of the game's elite players -- we ranked him as the No. 3 position player in baseball before the season -- he's squashed them in May.

In a win over the Washington Nationals Tuesday, Betts homered twice, while driving in four runs:

One fan (in the grey jersey) had a chance to make a play on both of them and whiffed twice 🤦‍♂️ pic.twitter.com/d5mTKHlHBx

Betts also homered last Saturday against the Philadelphia Phillies, adding in a reminder of his defensive prowess in the bottom of the seventh inning when Odúbel Herrera dared to test his arm:

Machado is off to a staggering start, hitting .368 with a 3.5 fWAR in a season that may cement his status as a future Hall of Famer. He's unquestionably the favorite for the NL MVP right now, though a lot can (and will) change in the coming months before voters have to decide. Whether or not Betts will be able to add a senior circuit MVP in 2022 to an already overflowing trophy case remains to be seen.

But what Betts has reminded anyone who may have forgotten with his month of May is that we're watching one of the greatest right fielders in MLB history. And while Trout is unquestionably the best player of this era, Betts is probably No. 2, and deserves his flowers. 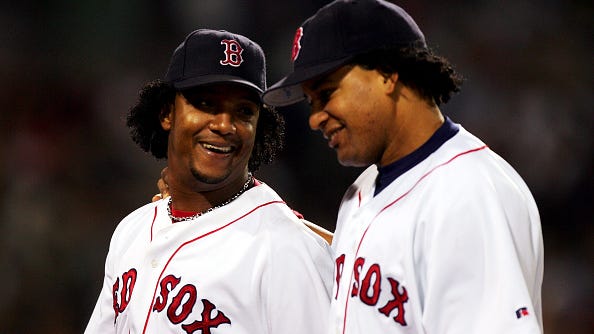