If you want to feel old, Manny Ramirez's *youngest* son is of age to be hitting tape-measure home runs.

Ramirez's third son, Lucas, was born in 2006, meaning he wasn't even alive yet when his father helped the Boston Red Sox snap an 86-year World Series drought in 2004. He almost certainly doesn't remember his dad winning a second championship with the Red Sox in 2007, or hitting .396 after being traded to the Los Angeles Dodgers ahead of the 2008 trade deadline.

Still, video emerged over the weekend of the the 15-year-old playing in a game for American Heritage Schools in Plantation, Florida. And while the freshman is not a right-handed hitter like Manny, he does appear to have inherited some of the 12-time All-Star's power:

Lucas' father, Manny, was one of the most productive outfielders in MLB history, hitting 555 home runs and posting a .996 OPS in parts of 19 major league campaigns with Cleveland, Boston, Los Angeles, the Chicago White Sox and Tampa Bay Rays. Additionally, between those first three teams, Ramirez established himself as one of the most dominant postseason performers the game has ever seen, as his 29 career playoff home runs are by far the most in MLB history.

But while Ramirez's resume is very much deserving of induction to the Baseball Hall of Fame, the 2004 World Series MVP has been kept out of Cooperstown to this point because of multiple failed PED tests. 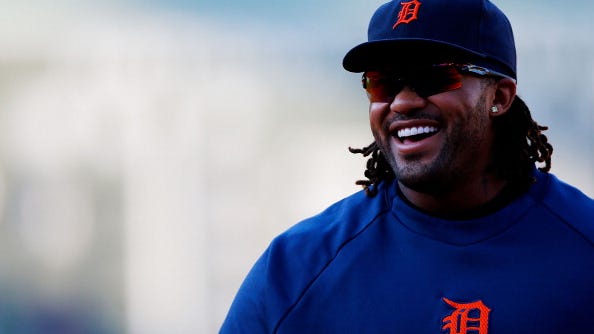 Watch: Prince Fielder's son has power like his dad