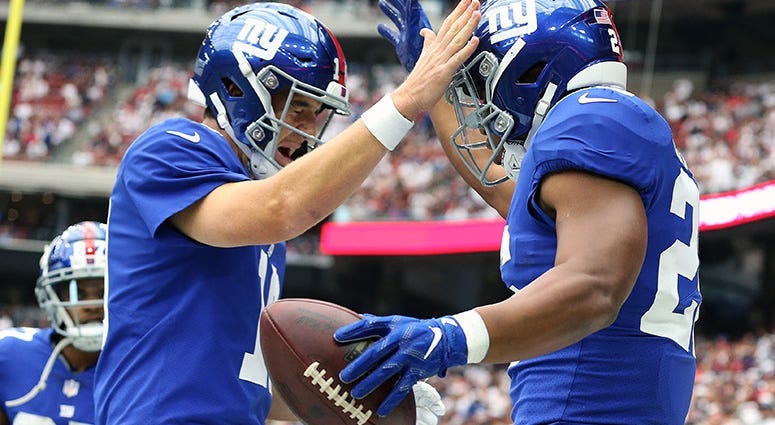 Eli Manning and the Giants offense came alive in Week 3, defeating the Texans 27-22 for their first win of the season. The Giants improved to 1-2 with a win that they badly needed to avoid an 0-3 start.

"It was good to get that first win. I'm kinda proud of the team," Manning told Mike Francesa on WFAN Monday. "We said we wanted to start fast. Coach said we have been an almost team, we almost have won some games. That's not good enough. We don't want to be an almost team. We started fast and got a big lead and then late in the game, needed a drive to secure the win and we did that also."

A big part of the Giants offense improving was the offensive line playing better. Benching Ereck Flowers in favor of Chad Wheeler. Manning had more time in the pocket and Pat Shurmur made adjustments. Manning finished 25-of-29 for 297 yards and two touchdowns.

"Guys were able to play fast. That just happens sometimes," Manning said. "You got a new offense, a new style going in. All of a sudden guys are put in spots. You want guys to play fast, know what they're doing, know their assignments like the back of your hand and be able to fire off and get the offensive line going and get the run game going. We were able to do those things. We had the plan and we executed it well. I thought guys knew their assignments, converted on a bunch of third downs, ran the ball well. We didn't hurt ourselves. We didn't have mistakes, we didn't have penalties, we didn't have sacks early on. We played good football. It showed. We had four scoring drives in the first half, which was big."

"The offensive line did a great, job especially early on, giving me time. Everything was working. That's a credit to them. The guys hung in their tough."

The 37-year-old QB also praised his running back Saquon Barkley, who ran for 82 yards and an impressive TD.

"He's just getting started. He's learning the feel of the game. He's a playmaker. We got to find ways to keep getting him the ball."

One of the guys on offense that the Giants lost to an injury was tight end Evan Engram. The Giants top tight end sprained his MCL and will miss at least a couple of weeks. Manning has confidence in his replacement, Rhett Ellison, who had a big touchdown grab.

The Giants return home next week in what could be a shootout against the 2-1 Saints.

You can listen to the entire interview with Manning on Mike's On in his weekly segment above.