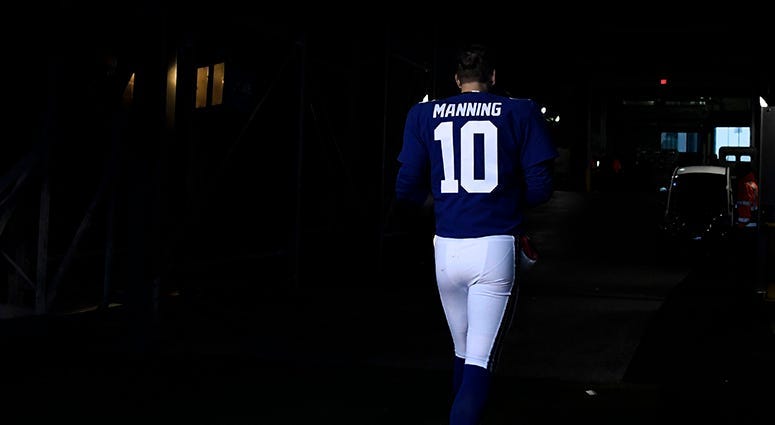 The future is an unknown for the future of the Giants at the quarterback position. Both the organization and Eli Manning don't know the direction they are headed just yet, days after the 5-11 season came to an end.

The longtime Giants QB joined WFAN's Mike Francesa Wednesday for his final weekly spot of the season. Manning opened up about his conversation with GM Dave Gettleman Wednesday.

"Let's just have an open conversation through this process," Manning told Francesa. "I'll be totally honest to them on what I'm thinking or what's going on or what I can or can't handle and vice versa. I'd just expect that from them. We got to figure out what's going to happen going forward. I appreciate Mr. Gettleman and Coach Shurmur and have a great relationship with all of them and want to continue that. Let's just be honest through this whole situation to figure out what's best for the Giants going forward."

What does the future hold exactly for Manning?

Does the 38-year-old (turns 38 Thursday) still want to play?

"I do. I love playing football," Manning said. "I like this team, teammates, and the coaches we have. Unfortunately when you have a lot of new players and new coaches it takes time to gel. We lost some heartbreakers. I want to play because I like the team and the players and the personnel. I think there's an opportunity to be a good team. I feel healthy. I feel I can last a full season. I can still make throws. I can still make all the throws I can make to be a quarterback in the NFL."

Could Manning envision a situation where he's playing elsewhere?

"It's hard to imagine that. You always want that (staying with one team). You always hope for that," Manning said. "It is until you're not. You just got to truly think about what you want to do and how it's going to go especially when you get older and know what it's like to go in a new offense, new players, and a new coach, it's not always a smooth transition you hope it's going to be.

You can listen to the entire interview with Eli Manning with Mike Francesa above.