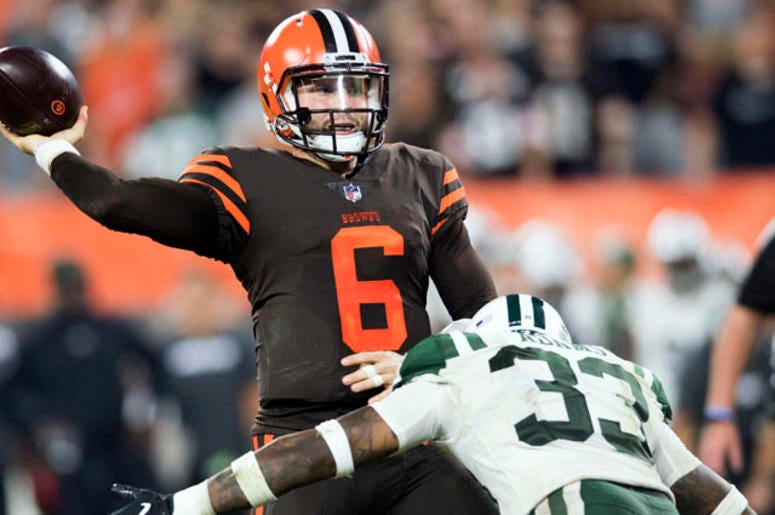 If the Jets seemed caught off-guard by Baker Mayfield in Thursday night's loss to the Cleveland Browns, there's a reason why: They were.

In his weekly appearance on WFAN's "Carlin, Maggie & Bart," Jets safety Jamal Adams admitted Gang Green was not prepared for Mayfield, the rookie quarterback who entered the game after Tyrod Taylor was injured and rallied Cleveland from a 14-0 deficit to a 21-17 win.

"We were prepared for Tyrod," Adams said. "When Baker came in, obviously we didn't have a game plan for him. But hats off to him. He came in, and he definitely played lights out. And they gained momentum, and we just couldn't grab it back."

Mayfield, the first overall pick in this year's draft, was 17-of-23 passing for 201 yards in the game.

"Honestly, man, we didn't see it happening," Adams said. "I'm just being honest. I mean, Tyrod goes down. Honestly, I didn't find out that Tyrod had a concussion until after the game. I thought they took him out. Obviously, injuries occurred, and the next man up. So, again, we weren't prepared for him."

"It's ridiculous, man," Adams said. "It really is. It's ruining the game of football. It needs to be changed quickly."

The Jets have reportedly reached out to the Steelers about a possible trade for disgruntled running back Le'Veon Bell. Adams said he would welcome the addition of the three-time Pro Bowl running back.

"He's another playmaker," Adams said. "Le'Veon is not only a running back; he's a receiver. He can do a little bit of everything, so he's a special player.

"If he comes, we would definitely be ecstatic to have him. If not, the best goes out to him."

The Daily News reported Tuesday that Todd Bowles is taking back some of the defensive play-calling duties from defensive coordinator Kacy Rodgers. Bowles will take over in two-minute and hurry-up situations, the report said.

In last week's loss, the Browns drove 75 yards to score the game-winning TD with 2:04 to play.

Adams said the switch was news to him, but was supportive.