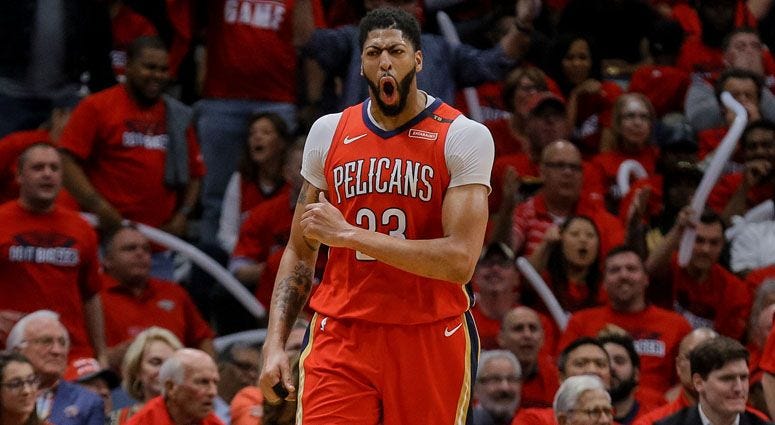 There will be no conclusion to the Anthony Davis saga until July, at the earliest. There’s still much we don’t know, including who the Pelicans’ General Manager is going to be, but Davis’ comments over All-Star weekend confirmed the Knicks as a team he would be willing to be traded to and potentially sign with long term. It is unclear exactly what other teams might be on that list, but the Clippers and Bucks also appear to be.

With Davis as one of the five best players in the sport, the Knicks should be involved in any trade conversation that takes place. There are a number of questions that we simply can’t know the answer to right now that will be essential to any decision the Knicks make regarding Davis.

Will the Knicks win the NBA Draft Lottery?

Who will the Knicks be able to fill their two max salary slots with if they can’t land Davis?

(We are working under the assumptions that Davis is giving the Knicks some level of guarantee he will re-sign with them long term in the summer of 2020.)

These are the unanswerable questions we will have to navigate in the just over four months before the sweepstakes begin. Whatever the future circumstances, the Knicks have to determine whether a Davis trade makes it more or less likely the team can be a real contender for a NBA Championship.

1. If The Knicks Win The Draft Lottery…

With the rights to Zion Williamson, the Knicks immediately have the best singular asset that would be available to trade for Anthony Davis. The question then becomes whether such a deal would be in the best interests of the franchise, which would also be impacted by what else they would have to include in such a trade.

The Knicks could attack a trade for Davis by using Williamson in one of two ways. If they are unsure they can lure two stars in free agency, they could agree to terms on a trade for Davis into their available cap space on draft night before free agency begins. Salaries coming and going would not have to match in this situation since the Knicks would be so far under the cap. The benefit of such a move is that it would motivate a star to take the remaining max free agent slot they have available, and the team wouldn’t have to include assets just to match salary.

The drawback would be that they would lose the ability to sign two stars to add to Davis. If the Knicks are confident having Zion Williamson alone would attract two top level free agents to play with their top pick, then trading for Davis this way doesn’t make a lot of sense. What’s better? Davis, Kevin Durant and a mid-level free agent or Durant, a second star (Kawhi Leonard, Kyrie Irving, Kemba Walker, Klay Thompson), and Williamson?

The other way the Knicks could attack an Anthony Davis trade is to wait until after they use their cap space to bring in two stars. If they can convince Kevin Durant to come with a second star, they could then try to cobble together the salaries necessary to get within 20% of Davis’ 27.1 million salary cap number to make the cap rules work, which is 21.6 million (according to Kevin Pelton of ESPN).

With Williamson projected to have a cap number of about 9.7 million, they would have to cobble another 12 million between Dennis Smith Jr. (4.5 million), Frank Ntilikina (4.8 million), Kevin Knox (4.4 million), and Mitchell Robinson (1.6 million). In other words, Smith, Ntilikina and Knox would all have to go with Williamson for Davis just so the salaries match. The team would be stripped of all discernable depth, but they would be able to build at a starting point of Kevin Durant, the second superstar, Anthony Davis and Mitchell Robinson. Finding veteran role players to sign for the team’s exceptions or acquire in trades for future picks would not be hard to fill the void and put together a team that could compete for a title.

With Durant already 31 years old, the Knicks would try to maximize the remaining years in his prime, and then when he departs they could use his money coming off the salary cap to build around Davis and the second star they sign. It would be something the Knicks would have to think long and hard about since it makes a short term run at a championship a very realistic possibility, even if it would strip the club to the bones in the post-Durant years.

Sticking with Williamson would give the Knicks a more stable future with young players that could take over for Durant when he finishes his contract with the Knicks, declines or retires. It is hard to argue, however, that Williamson and the Knicks youngsters would make the team more likely to win a title in Durant’s prime than Anthony Davis.

Would the pending Davis trade guarantee Durant and a fellow star’s arrival? Or would having Williamson play with those two new arrivals enough? How important is it to the front office to keep the homegrown young players around to grow around the newly arrived superstars? Is Williamson, plus Knox, Smith and Ntilikina preferable to just having Anthony Davis? The answers to these questions could change over the next few months, and the Knicks need to figure them out.

If The Knicks Do Not Win The Draft Lottery…

If the Knicks offered the Pelicans their 2019 draft pick, either their pick or Dallas’ in 2021 and the Mavericks pick in 2023, along with Kevin Knox, Ntilikina and Smith they would give the Pelicans a reason to walk away from the Lakers offer. Whether Jayson Tatum and the slew of young players and picks the Celtics could offer would entice the Pelicans from office to choose their offer remains to be seen, but the Knicks would certainly be competitive. If the Pelicans prioritize getting NBA ready veterans back that would help the team remain respectable, not team will be able to match the Celtics haul with players like Jayson Tatum, Gordon Hayward, Marcus Smart and as many as four draft picks.

Much like in the prior scenario, the Knicks would be wise to make this trade after they spend their cap dollars so they could add Davis to whatever two stars they add in free agency. If they had to make a trade like this before commitments from Kevin Durant or the other free agents, they would lose the ability to offer a max contract to a player of Kevin Durant’s tenure, and to a player with a year less of experience. Would Davis, Durant, another mid-level free agent and the few remaining young roleplayers with potential to get better be enough to make a title run? Probably not.

A deal like this would be much easier to swallow since the Knicks would not be trading Zion Williamson away. It would also be a toughsell to the Pelicans to convince them to take this offer instead of the Celtics offer. It’s probably more likely than not at this point that none of Knox, Ntilikina and Smith ever make an All-Star team. Whether potential picks like RJ Barrett or Ja Morant ever will is more a guess than anything else so long before they even start their NBA careers. Trading them for Davis is something the Knicks would have to do.

So what should the Knicks plan be for attacking an Anthony Davis trade?

If the Knicks win the lottery, trading for Davis becomes far easier to execute, but much more difficult to judge if it’s in the best interest of the franchise. If Durant and Kyrie Irving are coming anyway, then passing on the trade makes more sense. If they will only come if the Knicks have a trade for Davis in hand, then making the trade becomes necessary.

If the Knicks finish second or third in the lottery, trading for Davis becomes far more attractive to the Knicks, but their offer to the Pelicans loses its most valuable piece: Zion Williamson. Three huge events will occur between now and July that will determine Davis’ fate:

1. Who wins the draft lottery.

2. How the Celtics perform in the playoffs and subsequently whether Kyrie Irving plans to re-sign there. (which would affect their potential offer)

3. Who the Pelicans make their new general manager, and how much Gayle Benson plays a role in trade decisions.

So much can change between now and July 1st, but these are the scenarios the Knicks will be considering between now and then. This is probably the most important offseason in the franchise’s history, and Anthony Davis is going to be a big part of it.

You can follow me on twitter at twitter.com/Schmeelk and subscribe to my new podcast The Bank Shot, which can be found on Itunes here: https://t.co/kmPo2AFAhZ  or on radio.com or other Podcast platforms. You can also listen to my latest episode with Brian Mahoney of the AP on wfan.com here: https://t.co/9PgoCPsVfw