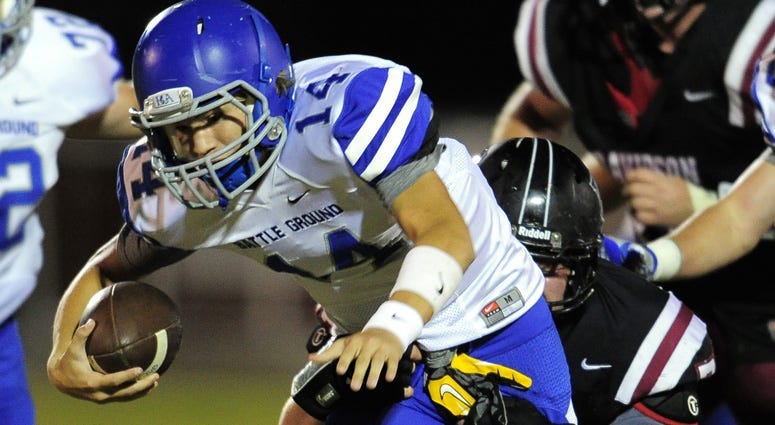 Police received a call about the fight just before 3 a.m.

"The fatal stabbings appear to have resulted from an argument over a woman that began inside Dogwood Bar and then turned physical when the parties went outside," the Metro Nashville Police Department said in a news release. "Multiple persons were involved in the outdoor fight during which the two men were both fatally stabbed in their sides."

No arrests have been made. Police have released a photo of a man wanted for questioning.

Do you know this man wanted for questioning in the double fatal stabbings of Clayton Beathard, 22, & Paul Trapeni III, 21, during a fight early Sat. involving multiple persons outside Dogwood Bar, 1907 Division St? Please call 615-742-7463 if you recognize him. pic.twitter.com/nESVyw5UGy

Beathard, of Williamson County, Tennessee, was in his junior year at LIU, which began Division I play in 2019. In seven games this past season before suffering an injury, he completed 94 of 182 passes for 1,071 yards with four touchdowns and six interceptions.

"Heartbreaking Day," LIU coach Bryan Collins wrote on Twitter. "Our Family is hurting. All of my thoughts and prayers are with the Beathard Family . Clay you will be remembered always. Love our Sharks."

Heartbreaking Day . Our Family is hurting. All of my thoughts and prayers are with the Beathard Family ----. Clay you will be remembered always. Love our Sharks . pic.twitter.com/9vC5gy70Qr

Beathard, transferred to LIU after beginning his career at Iowa Western Community College.

"Clay was an amazing, big and soft hearted human being with an undeniable love for the Lord," Beathard's parents, Casey and Susan, said in a statement to The Tennessean. "He had his family’s, friends' and teammates' backs even to a fault. I wish he would have been more inclined to take the high road but he hated 'wrong.'"