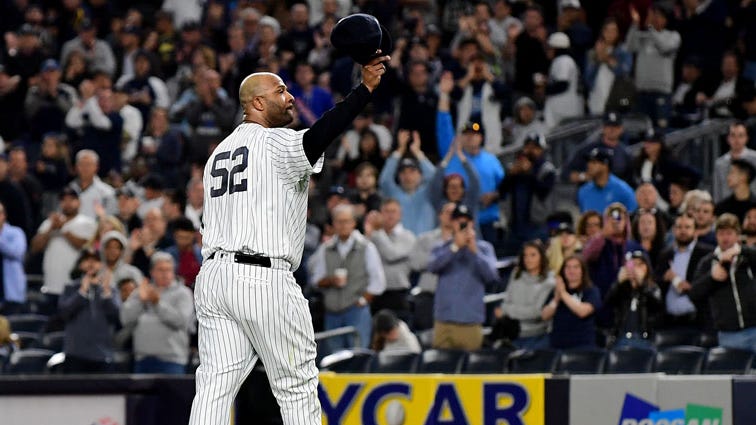 The Story Of CC Sabathia Told Through 2 Decades Of Teammates

In Thursday night's American League Championship Series Game 4 loss to the Houston Astros, Sabathia left in the fourth inning with a shoulder injury, which will likely be the end of the Yankees great's career.

Sabathia made 583 starts in his MLB career, 272 with ex-Yankees manager Joe Girardi as his skipper (more than any other).
Robert Deutsch / USA Today Sports

“That was not the way I wanted to see it end for him,” Girardi said while serving as an analyst for MLB Network. “CC, you’re a Hall of Fame pitcher that was as tough as any man I was ever around."

Back in April, Sabathia joined a very exclusive fraternity, becoming just the 17th pitcher in MLB history to have 3,000 strikeouts. The only two pitchers on that list to not make the Hall of Fame are Roger Clemens and Curt Schilling. Needless to say, their Hall of Fame candidacies are more complicated.

Joe Girardi fights back tears talking about CC Sabathia: “you were probably the greatest teammate I’ve ever been around”(Via @MLBNetwork)pic.twitter.com/bebJnnT4ZF

“You were a great husband, great father,” Girardi said while holding back tears. “You were probably the best teammate I’ve ever been around. Your ability to pull all 25, sometimes all 50 people together in the clubhouse. You were the guy I always wanted on the mound when we needed a win. It was a privilege to manage you for nine years. I love you, man.”

The Yankees will try to keep their season alive in a possible elimination Game 5 Friday night at Yankee Stadium.

The outpouring of support for Sabathia on social media from current and former major leaguers Alex Rodriguez, Trevor Bauer, Phil Hughes, Dontrelle Willis and others will hit you right in the feels.

.@CC_Sabathia is a true warrior. Throwing until he couldn’t and then trying again. Baseball is life and he showed it right there. #Hero #MyBrother #NothingButRespect

If that’s the last pitch we see you throw in a big league game @CC_Sabathia thank you for all the years and memories. From the dominance with the @Indians to the run with @Brewers to the leadership with the @Yankees...cheers to you. One of the best to ever do it.

Best teammate I ever had. Gave everything for his first pitch to his last. Thank you CC

CC was the first to call me when i won 20 games... nothing but love and respect for a Bay Area hero. I’ll be there for your HOF SPEECH big bro. -- #ALCS #Yankees