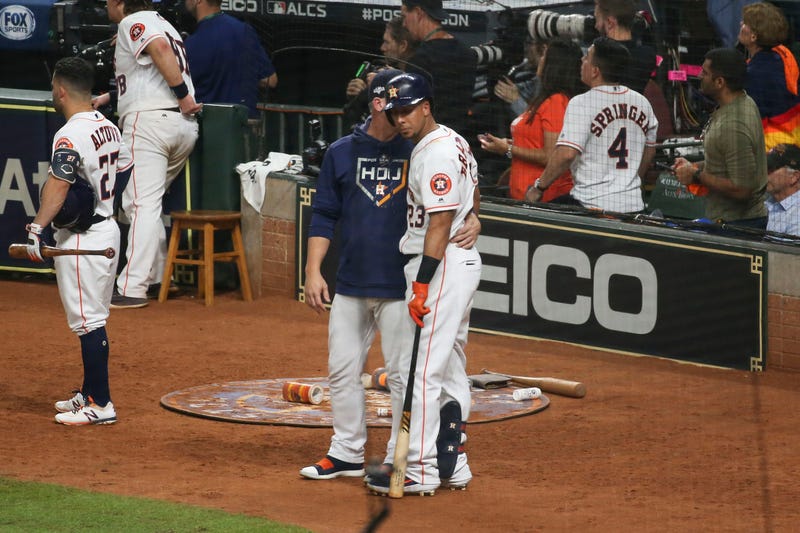 For a brief, scary moment during Game 2 of the AL Championship Series, all eyes were focused on the Astros dugout after a paramedic was struck by an errant foul ball.

In the bottom of the fifth inning, outfielder Michael Brantley fought off the pitch and sent the ball directly into the Astros dugout, hitting one of the team's employees. The man struck is one of the Astros' on-scene paramedics according to The Houston Chronicle's Matt Young.

"He was immediately taken to the hospital, evaluated and is currently in stable condition," said Harris County Emergency Corp CEO Jeremy Hyde," via MLB.com's Alyson Footer.

This Brantley foul ball hits a member in of the Astros support staff. I’m pretty sure you can hear someone yell “need a doctor” at the end of this video. pic.twitter.com/me0N21hugN

The scene left players on both sides visably shaken.

Yankees' catcher Gary Sanchez immediately lifted his arms and bent over in disbelief. Various members of the Astros roster, sitting within feet of the man, collapsed their heads into their hands. Astros manager AJ Hinch consoled Brantley, pacing around home plate, as the paramedic was removed from the site and was treated for his injury.

According to Young, Astros' pitcher Gerrit Cole was by the medic's side as he was wheeled out en route to the hospital.

The Astros have been proactive in protecting their fans from foul balls. In 2019, the team extended the protective netting around the field following a previous incident where a young fun was struck by a foul ball.