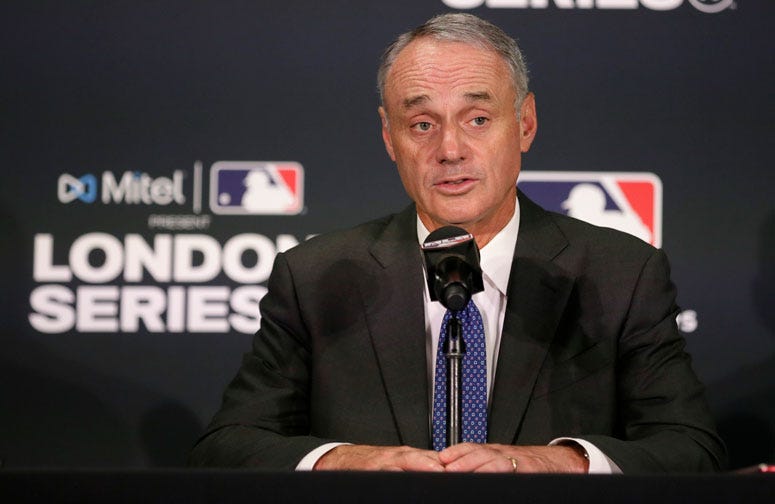 The use of designated hitters in the National League is inching closer to becoming reality, MLB commissioner Rob Manfred said Thursday.

Following the quarterly owners’ meeting Thursday, Manfred indicated that progress has been made on an issue that has been hotly debated for decades.

"I think that is a continuing source of conversation among the ownership group, and I think that the dialogue actually probably moved a little bit,” Manfred said.

The prospect of the DH coming to the National League is still a ways away, although interest from the commissioner and some owners is real, as Major League Baseball continues to ease the gap between the two leagues.

The notion that the DH is more likely to come to the NL than pitchers hitting in the American League is underscored by the declining production of pitchers at the plate. This year, pitchers are batting a combined .112 in just over 2,000 plate appearances, on pace to set the all-time low.

Additionally, pitchers have shown a lack of durability at the plate. Notably, the Mets' Jacob deGrom hyperextended his pitching elbow swinging the bat last month, and just this past weekend, the Yankees' Masahiro Tanaka strained both of his hamstrings running to home plate on a sacrifice fly.

Abolishing the designated hitter would be a tough sell to the players' union, as it would strip the players of several well-paying jobs and force AL pitchers into uncharted waters, hence the rationale that the DH coming to the NL is a better fit for the league as a whole.

The AL has been using designated hitters since 1973.