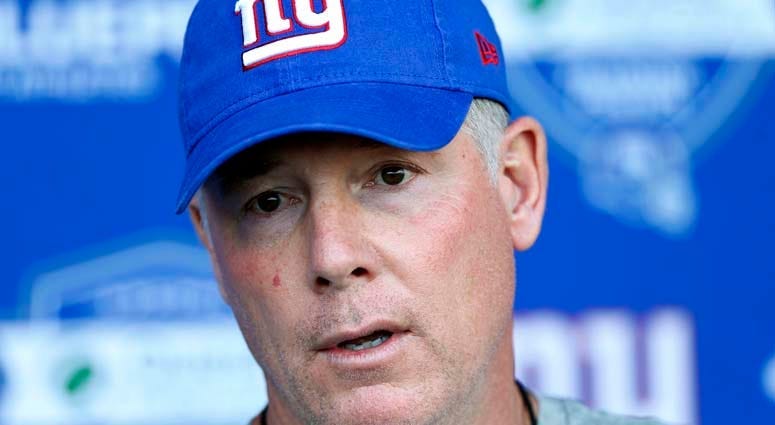 Giants coach Pat Shurmur said Tuesday he hasn't yet spoken to his players about the NFL's new national anthem policy but trusts they "are going to do the right thing."

"I think if we just let it settle for a minute, at some point we’ll sit and discuss it, but we haven’t done it yet," Shurmur told reporters at OTAs at the team's practice facility.

So what is the "right thing" in Shurmur's mind? He didn't elaborate, but his personal views on the anthem could shed some light on where he stands.

"I know certainly for me, it's very easy," he said. "I'm going to face the flag, take my cap off, listen to the anthem and be thankful that my family and I live in the greatest country in the world and be able to kind of reflect on and be thankful for all the sacrifice that a lot of people have gone through to help protect and secure our freedom."

The NFL announced a new policy last week that permits players to stay in the locker room during the national anthem but requires them to stand if they are on the field. The teams of violators will be fined and the players themselves will be subject to additional discipline from their clubs and the NFL.

Started by former 49ers quarterback Colin Kaepernick in 2016, some NFL players began kneeling during "The Star-Spangled Banner" to protest police brutality and racial inequality. The issue reached a fever pitch last season after President Donald Trump said at a campaign rally that he'd love to see NFL owners fire players who protest during the anthem, which sparked widespread protests by players.

Three Giants players kneeled during the anthem last year. Olivier Vernon did so for much of the season, while Landon Collins and Damon Harrison protested for one game.

Giants linebacker Mark Herzlich said Tuesday he wants to invite Trump to visit the team and participate in a productive conversation about the protests and the issues behind them.

"I think the best way to handle remarks like that is it's not necessarily a push back against his remarks," Herzlich said, according to the New York Daily News. "It's to maintain the focus on the real issue. The real issue isn't players being against a president or against a country. It's about players being for unity, and they want to create an atmosphere with law enforcement, with others in their community that we share in the locker room.

"You go in the locker room and guys from every single race, every single demographic, every single religious background, and we all are just a team," he added. "And so I think we see that, what's possible. And I would love Trump to come down here and hang out in our locker room and see what locker room talk's really about, and talking about our night nurses and our babies -- this is what we talk about, it's a family."