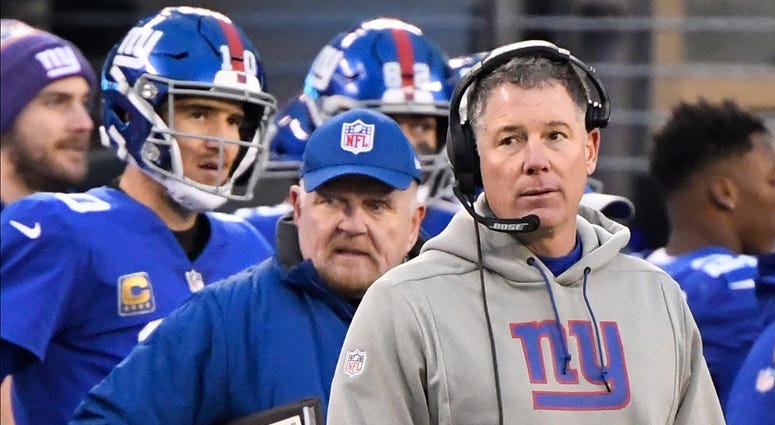 Eli Manning’s 2018 season has gotten better as it has gone on, but his future with the Giants past this year remains uncertain.

Manning is signed through 2019 for $11.5 million and is due a $5 million roster bonus in March. The 38-year-old has a salary cap number of $23.2 million, which could make it tough for the Giants to keep him.

On Tuesday, Pat Shurmur joined Mike Francesa on WFAN. They touched on a variety of subjects, including the 30-27 win over the Bears and Eli Manning’s future with the team.

When Shurmur was asked if Manning would be the Giants’ quarterback in 2019 he couldn’t give a straight answer.

“Those are offseason discussions,” said Shurmur. “I’m really pleased with the way he’s been playing of late. ... I can’t answer that. I’m fond of everything that Eli brings to the table. I'm fond of who he is as a person. I get a chance to see him behind the scenes, and I see how hard he works. And I know how hard he wants to win. But no matter what the talent level of the quarterback is, the team around him has to play well too.”

Shurmur's lack of an answer on Manning's future will only increase the speculation around whether the Giants will keep their two-time Super Bowl Champion quarterback. Manning has thrown 15 touchdowns and 8 interceptions and has completed 67.9% of his passes so far this season.

The Giants' head coach also spoke about his level of satisfaction with his team's recent performances. New York has won three of their last four games after starting the campaign 1-7.

"There's plenty of plays in a game that drive me nuts ... The third quarter of the season was much more of what we were looking for in terms of wins, because right is right, and winning is what we're trying to get done here. That helps also kind of push the guys along knowing that what we're trying to do here is right. So we feel better about where we're going."

Listen to the full interview with Pat Shurmur below: