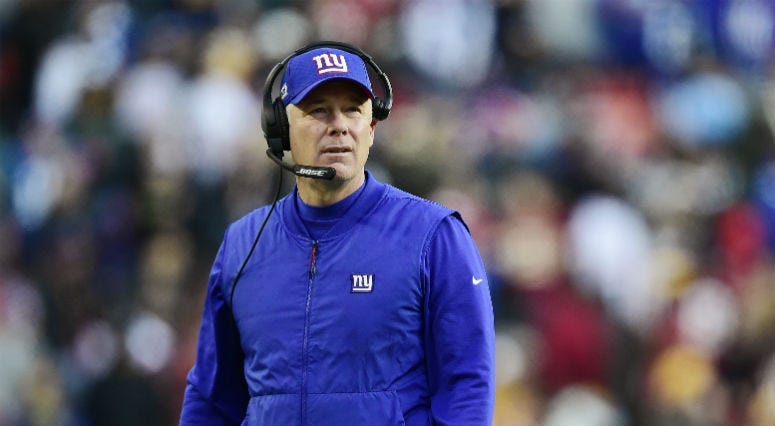 The Giants selected Penn State running back Saquon Barkley second overall. Barkley ran a 4.4 in the 40-yard dash and rushed for 1,134 yards and scored 16 touchdowns in his junior season.

"We're thrilled," Shurmur said. "Certainly, we felt like he was the best player in the draft. We're sitting there at the No. 2 pick, and he was available. It was a very easy decision at that point."

Shurmur was asked by Joe if the Giants considered selecting a quarterback in the No. 2 spot.

"We evaluated all the quarterbacks," Shurmur said. "We certainly had a high opinion of all the guys that everybody talks about. Certainly, the one, like Sam Darnold, who was taken just behind us. And Baker (Mayfield), all the guys -- but we just felt too strongly. It was really more about Saquon than it was the quarterback."

UTEP guard Will Hernandez was the Giants' next pick in the draft, in the second round (34th overall). Roberts asked about the possibility of Hernandez starting right away.

"We're going to work him in and see where everything takes him," Shurmur responded. "We drafted him with the idea that he's going to be a starter. We'll just see how long it takes him. It's like everything. You've got to come in and earn it."

"He's an outstanding talent," Shurmur said of Carter. "He's going to be a great addition to our new defense. We're going to play five on the line, much like the Jets do in certain situations. He's got great length. Lorenzo plays the run well. He drops (into) pass coverage. Then, he has the ability to rush the passer, and he's a terrific young man to boot. Really, he comes in with a lot of special teams reps under his belt. So, that's a terrific profile for a young defensive player."

Richmond quarterback Kyle Lauletta was taken by Big Blue in Round 4 (108th overall). The Giants' final pick came in the fifth round when they selected Miami defenseive tackle R.J. McIntosh 139th overall.

"The selection of Kyle Lauletta is more about Kyle and less about Davis (Webb) and Eli (Manning)," Shurmur said. "It's about adding talent. When you go through the draft, I think everybody keeps talking about the best available player and need. We felt very strongly that he has a chance to be a really good player in this league."

One topic addressed during the interview was the status of offensive tackle Ereck Flowers. The 2015 ninth overall pick missed a voluntary minicamp last week.

"This is a difficult time to talk about those kind of things because it's voluntary. I get that," Shurmur said. "There's enough on tape. Things didn't go very well last year for the Giants. But he played through the year, and there's enough on tape for me to see that there's talent there. Whenever he decides to come in, we're looking forward to working with him."

"The one thing about Odell -- and I've gotten an appreciation for Odell over the last few months -- this guy loves to play football," Shurmur said. "When he's here, he's all-in. He's really engaged in the meetings and on the field. So, I'm looking forward to working with him."

Benigno described the Giants' offense as having the potential to be "an explosive offensive football team."

With Barkley added to the mix and a beefed-up offensive line, the Giants could be one of the league's most dangerous offenses in 2018.