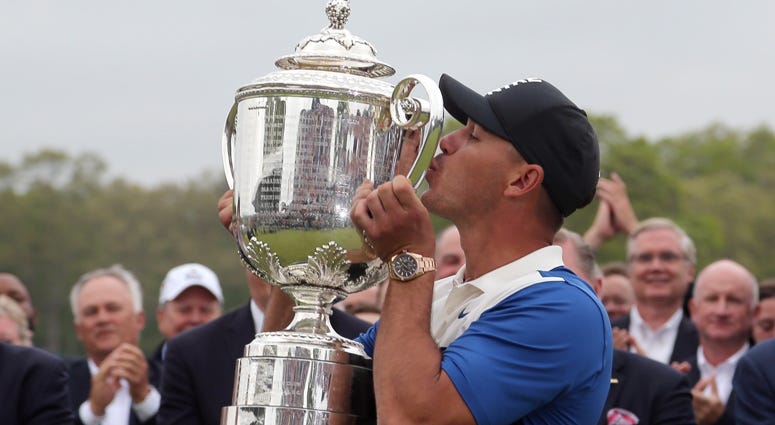 Brooks Koepka showcased his muscle, finesse and focus during the first three rounds of the 2019 PGA Championship. But what he revealed in Sunday’s final round makes him an even greater champion.

Koepka showed vulnerability, grit and a fierce desire to overcome the ultimate challenges: a Bethpage Black that was playing brutally tough, wind gusts up to 20 mph that wreaked havoc on his tee shots, pressure from the now-former No. 1 player in the world (as Koepka took over the top ranking from his buddy Dustin Johnson) and stress when his huge lead evaporated quickly in a span of an hour.

Whoever thought they’d skip out on the conclusion of Koepka’s closing round because he started the day so far ahead -- his seven-shot lead after 54 holes was a PGA Championship record -- missed a nail-biting, dramatic back nine and the intensity of watching Koepka’s sheer determination will him to his fourth major title in his last eight tries.

Koekpa’s big lead quickly dissipated when he bogeyed four straight holes, Nos. 11-14. With Johnson birdying the 15th, Koepka’s lead was reduced to one.

“I felt like I was playing good,” Koepka said after he won by two shots with an 8-under 272. “I just made mistakes at the wrong time. This golf course, that whole stretch from 7 to 13, you've got to hit good drives. I put it in the rough. You're going to have a lot of short par looks. I mean, I challenge anybody to go play this golf course in 15- to 20-mile-an-hour winds and see what they shoot. DJ played a hell of a round. That was pretty good. This golf course, it will test you, for sure.”

Koepka said when he got to the 14th green, he was “in shock” with the turn of events. And hearing the crowd root for Johnson got under his skin, which he used for motivation.

“I tell you what, the hour spent from No. 11 to 14 was interesting," he said. "When they started chanting 'DJ' on 14, it actually kind of helped, to be honest with you. I think it helped me kind of refocus and hit a good one down 15. I think that was probably the best thing that could have happened. It was very, very stressful, the last hour and a half of that round. That's why I let a big sigh of relief go. ... I wasn't nervous. I was just in shock, I think. I was in shock of what was kind of going on. On 14, we had 150 yards to the hole, and Harold (Varner III, whom he was playing with) hit 8, and the wind ate it up, and mine, it just died on me. You know, I made a good swing there, too. I felt like I just got stuck on a bogey train. If you're going to put it in the rough, you're going to have to really rely on your putter.“I didn't make one on 11. On 12, didn't have the easiest of par looks. Thirteen was a bit disappointing, and 14 was just a bit of a shock to go four in a row. I can't tell you the last time I've made four bogeys in a row. I don't know if I ever have -- I'm sure I have. But just had to reset."

When asked if he ever thought he’d fail to win (while his lead was evaporating), Koepka replied: “It was definitely a test. I never thought about failing. I was trying my butt off. If I would have bogeyed all the way in ... I still would have looked at it as I tried my hardest. That's all I can do. Sometimes that's all you've got. You know, even if I would have lost, I guess you could say choked it away, I tried my tail off just to even make par and kind of right the ship."But I never once thought about it (losing). I always felt like once I had the lead, you know, he's going to make one more birdie, and I've got to make a bogey for this thing to kind of switch. I think hitting the 15 tee shot down the middle of the fairway definitely kind of helped ease a little bit of the tension, knowing that that pin was kind of in a gettable spot, but then hit a terrible wedge shot. I don't know how you miss that slope, but I did.”

Those who feel that Koepka doesn’t have much personality, I suggest you observe him a bit closer. On the course Sunday, Koepka indeed showed he’s human. Off the course in the interview room, he continues to be brutally honest and transparent, not hesitating to tell us what he really thinks.

On Sunday morning, Warren Bottke, who coached Koepka from the age of 10½ until he was 17 at PGA National in Palm Beach Gardens, Florida, where he is the head golf instructor, told me on WFAN's "Talkin’ Golf" that Koepka was “shy from the ages of 10-14 ... was the kind of kid you had to drag off the range. Very inquisitive, always thinking, asking questions.

“He was like a sponge. He liked to mop up all kinds of information, but he was a stoic kid. You never knew what was going on inside. ... He always had that twitch in his eye. You always wondered what he was thinking.”

As Koepka piles up the major wins, the 29-year-old has shared more and reacted more to perceived slights and comments.

My feeling is that, as Koepka continues to win majors and be under the spotlight and feels more at ease in front of the media, his "stoic" personality may loosen up a bit. He’s already as open as can be when he answers questions. He always gives an opinion, and that’s a good thing.

“The media thinks he’s arrogant, but there’s a fine line between confident and cocky," Bottke said.

When I asked Bottke on Monday morning how much he was sweating when Koepka’s lead dwindled to one, he said: “A lot! But I still had a peace about it, knowing him and his makeup.”

That "makeup" is one of an incredible champion who grinded out all four of his major wins and who will continue to show an amazing combination of brute strength, mental focus and a fierce determination to overcome -- that, to me, is entertaining and compelling theater.