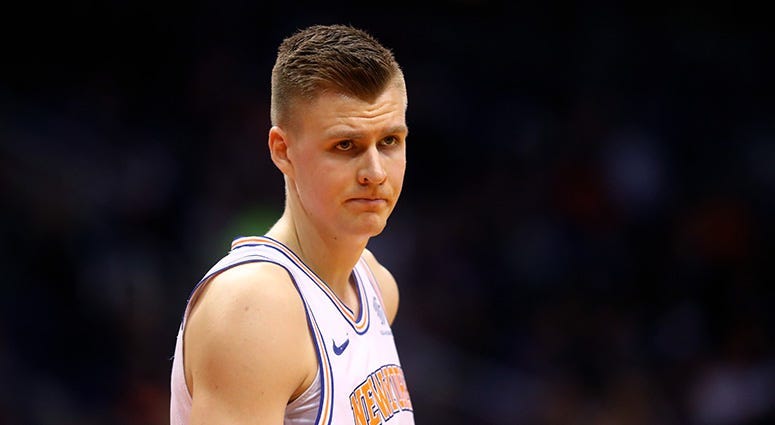 When the Knicks traded Kristaps Porzingis on Thursday almost out of left field, the fan base was shocked, frustrated, confused and needing to know what was hell was going on. The team just traded their 23-year-old franchise player that was rehabbing from a torn ACL. He was going to be the piece that they pitched to a max free agent this summer to join him and a top five pick in the NBA Draft.

After letting the news settle for a day, along with hearing all the reports that Porzingis wasn't happy here and wanted to be traded, trading him made complete sense. Why keep Porzingis, coming off a torn ACL and becoming a restricted free agent, when he had no desire to be part of a future in New York? That's an issue if a 23-year-old who hasn't even played a full season in the NBA is already wanting out, because the team has been losing. There seemed to be a sense of entitlement for a player with potential, but one who hasn't done a thing to deserve any of that just yet. Trading him now when his return is still a question mark was the smart move, instead of waiting until the offseason. The immaturity he has shown and the inability to stay healthy isn't what you want to build around, even if he's 7'3" with incredible talent.

Also, the Knicks were able to get rid of Courtney Lee's contract, which would have been very difficult otherwise. Lee has one more year on his contract worth over $12 million. They also got rid of Tim Hardaway Jr.'s contract, which had two year and $37 million left on it. We know what Hardaway Jr. is. He can score, but he's incredibly streaky and doesn't play much defense. That was a praise for the Knicks to get him off the books. Getting rid of those two guys cleared up $50 million. On top of that, the Knicks got two future first-round draft picks, which are assets that will help them build down the road, even if they are a few years away. This team has made bad trades by giving away first-round picks, and they are slowly starting to gather some of those that could also potentially be used in a trade, whether it be for Anthony Davis or someone else down the road. Davis is going to end up with the Lakers though and trading pieces to get him would be a mistake.

As crazy as it sounded when the trade went down, the Knicks actually set themselves up for the potential of a bright future ahead making this trade. They set themselves up to have room to sign to max free agents this summer. Before the deal, they barely had enough room for one. They can now get two and fill out the roster with some cheaper pieces and veterans as well. That means Knicks fans can have some hope that they sign the likes of Kevin Durant, Kyrie Irving, Kemba Walker, Jimmy Butler and Klay Thompson. Getting two of the guys is now a possibility, and a real one, especially if they can get that top pick and draft Zion Williamson.

The next question people would have is why come to the Knicks? This organization has missed out on big-time free agents in the past, spending their money in the wrong places. Some of those poor decisions a la signing Joakim Noah to a four-year, $72 million deal came at the hands of Phil Jackson. Knicks GM Scott Perry is much more experienced and he knows what he's doing. Nobody had that impression with Jackson at the helm, which was a disaster from start to finish. Perry did a solid job in the draft, getting Kevin Knox, who has showed good signs this season, getting Allonzo Trier undrafted, which has looked like a steal and drafting Mitchell Robinson, who is still raw, but has shown spurts that he could be a valuable big man off the bench.

There's a big IF to this trade because people can rightfully question whether the Knicks will actually sign Durant and another big name. The key factor is that transforming this team can happen. They have the ability to have two legitimate superstars instead of maybe one and Porzingis, who has played 72 games then 66 then 48 and won't play a minute this season. That's not a great trend going forward for a team that hopes to become a playoff squad next season. Judging this trade will really come down to how the Knicks use that $75 million they have to spend.

People will question if New York City and Madison Square Garden still hold weight. Guess what? THEY DO. Players love coming to play at MSG. Players love NYC. It's the greatest city in the world. If you're a star here, you're the king of the city. It means more marketing opportunities, building your brand, and making more money off the court. You also can't deny the NYC nightlife. Plenty of visiting players come here and find themselves at 1OAK or LAVO or whatever it may be. These guys want to be seen, they want to be in the limelight, they want that attention. The Knicks have the chance this summer to bring back the glory days, back in 2000 when MSG was rocking and the Knicks were cmpetitive and in the playoffs year after year.

The Knicks have money and assets they didn't have with Porzingis on the roster. That should give fans hope for this franchise to turn this ship around and become a contender again. They have been the laughingstock for long enough now. It's time for things to change. That can happen this summer. Whether you believe it or not, a roster featuring Kevin Durant, Kyrie Irving, and Zion Williamson can be put together. Put those stars with the youth of Trier, Knox, Robinson and the newly acquired Dennis Smith Jr., and it's no longer a pipe dream for the Knicks to be atop the East sooner rather than later.

It might just take throwing some of the past mistakes out the window for everyone to believe in that, though.