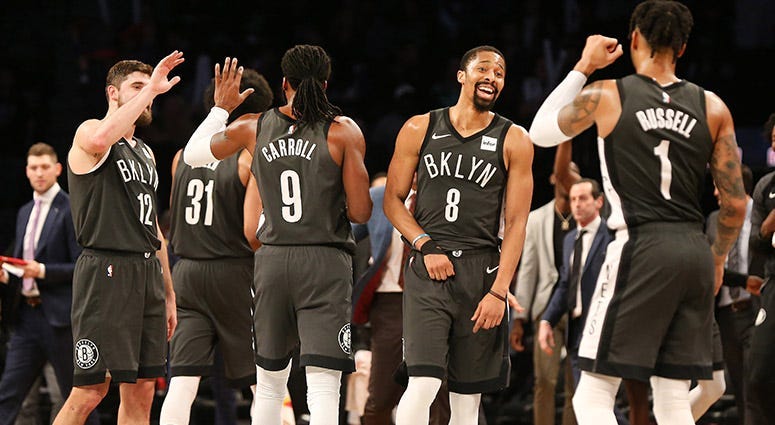 The Brooklyn Nets have always had to fall under the radar since they came to New York City. Early on in Brooklyn, they had some success with the trio of Joe Johnson, Paul Pierce and Kevin Garnett, but never were able to get to the Eastern Conference Finals Since those first couple of years, the team has quietly put the pieces together in losing seasons to now form a competitive roster...one that has climbed their way into relevancy in the playoff standings in the East.

It's time we show BROOK-LYNN a little bit of love, because Kenny and the Nets have been a remarkable story in 2018-2019.

Has anyone, especially one of the playoff teams, suffered as many injuries as this Nets squad has? Every week it's someone new to add to the injury report. The Nets struggled badly right out of the gate, and then in the 14th game of the season they lost Caris LeVert to an ugly looking leg injury on Nov. 12 to the Timberwolves, where they dropped to 6-8 on the season. They luckily got the promising news that even with the broken leg, LeVert would likely return this season. This is a Nets team that lost eight games in a row shortly after LeVert went down, dropping to 8-18 in what was looking like another lost season.

The LeVert injury came right after DeMarre Carroll missed the first 11 games of the season. After losing LeVert, the Nets lost Allen Crabbe to a knee injury as he's been out since Dec. 14. After losing LeVert then Crabbe, the Nets lost Rondae Hollis-Jefferson on Dec. 29 for nearly three weeks. Then on top of that, they lost veteran forward Jared Dudley on Jan. 11 with a hamstring injury. They also went without guard Treveon Graham for the first couple of months to an injury as he just returned on Jan. 4. If every one of those hurdles wasn't enough for Kenny Atkinson and the Nets to deal with, they now will be without their Sixth Man of the Year candidate Spencer Dinwiddie for 3-6 weeks as he gets surgery on his thumb.

Yet somehow, this team continues to fight and never give up. That's a true testament to the job Coach Atkinson and his assistant coaches have done coaching up this team. It's that 'next man up' attitude that some team in New England with a Hall of Fame QB and head coach have used for the last 15 years, looking to win their 6th title on Super Bowl Sunday in Atlanta. Atkinson has to be up for Coach Of The Year if the Nets continue playing the way they have. Most people saw this team as one that can improve and maybe fight for a bottom seed in the East playoffs, but nobody saw them playing as well as they have. Atkinson has done a terrific job turning this from a 28-win team last season to a team that will hit 28 wins before February comes. Atkinson is right there along with Michael Malone as the NBA Coach Of The Year favorite at this point.

While it's been the D'Angelo Russell show, the Nets have been getting key contributions from top to bottom as new heroes seem to step up every night for this potentially playoff-bound team. The Nets have six players averaging in double figures, and four guys on the cusp, averaging at least nine PPG. That means there are 10 players on the roster averaging nine PPG or better. In many cases, that is unheard of on any team. It's a true testament to the team basketball that they are playing and being able to rely on new guy to step up each night. If Russell isn't knocking down threes, then Joe Harris is. If they are off, then Carroll steps up. They get highlight reel dunks and blocks from their developing big man Jarrett Allen, who is just 20. Not to mention, rookie Rodions Kurucs has been tremendous for this team, and they weren't even sure coming into the year what his role would be. Coach Atkinson wasn't even playing Kenneth Faried, which remains somewhat of a mystery to this point, but they didn't even need him. He's now in Houston getting playing time with the Rockets. This is a team with a nice balance of youth mixed in with a couple veterans with nobody truly selfish from the first man up to the last man on the bench.

D'Angelo Russell Has Transformed His Career

D'Angelo Russell has essentially transformed himself into a star overnight. In fact, he's going to the All-Star Game for the first time in his career. He has rewritten a career that was once known for his issues off the court, most notably, the Snapchat incident involving Nick "Swaggy P" Young that had him become an outsider to his teammates in Los Angeles. Russell has now made a name for himself in Brooklyn this season, leading the charge for the surging Nets team and he's looked unstoppable many nights. The 22-year-old point guard is averaging a career-best 19.2 PPG to go along with 6.4 APG, 3.8 RPG, and a steal per game. He's also shooting a career-best 43.8% from the field and 37.6% from three-point range. Russell has been electric some nights, looking like he won't miss from downtown. He's been a true wizard at the point, which the Nets have truly lacked since Jason Kidd was running the show.

Spread Love, It's The Brooklyn Way

The Knicks stink right now. They are a team that won't win 20 games, and that has all sorts of issues as they pray for the balls to fall their way in the lottery, where they can end up with someone like Zion Williamson. It's about time the boys in Brookly get a little love from both New York and nationally, because this is a fun, young playoff team. It would be nice to see the Barclays Center rocking these last few months and in a playoff series. Many want to wait and see...mixed with the fact there aren't a ton of Brooklyn Nets fans, but it's not too late to hop on board. There needs to be some electricity in Brooklyn, instead of opposing fans coming in and the home crowd being forgotten about. With 32 games to go and 15 of them being at home, the Nets need to establish some true home-court advantage.

Wait until they are at full strength with everyone healthy, which has not happened once this season. If that happens when the playoffs come around, keep your eyes peeled. It's not crazy to envision this team making some noise in the Eastern Conference, playing into May.