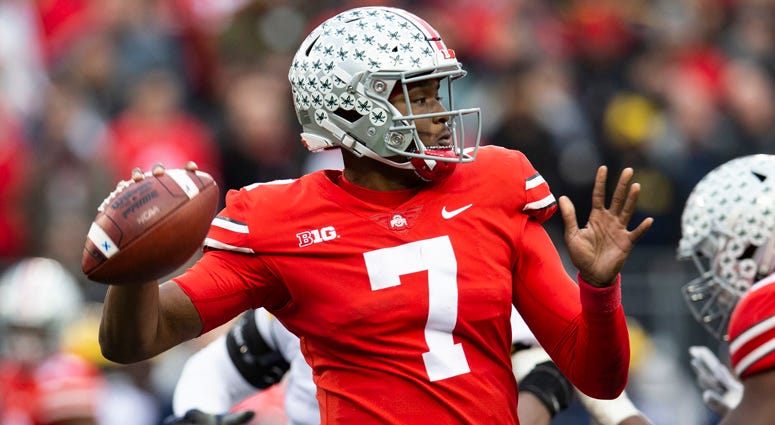 While the Jets bogart the bold ink by hiring a new head coach, the Giants are quietly brooding over the next most important person on a football team.

Gang Green now has Sam Darnold's new wingman, main man, and mentor for the next decade (if all goes well). Big Blue, in theory, has their QB whisperer, but not a young QB for him to mold into his masterpiece.

Instead, the G-Men still have Eli Manning under center, perhaps the lone link to their two Super Bowl titles this young century. Everyone else has either been fired or retired, melted into history, occasionally exhumed for some alumni function or anniversary.

Giants fans love Manning for the two Super Bowl titles the Giants rode up Eli's right arm. But through poor personnel decisions or blinding nostalgia, they've clung to Manning as their quarterback well past his prime.

MORE: Eli Manning Speaks About His Time With Giants, Future

A famous sports mantra -- most often credited to Branch Rickey -- says it's better to let go of a star a year early than a year late. Yet instead of feasting upon the buffet of young, wildly gifted passers in last year's draft, the Giants snagged Saquon Barkley, who is an absurdly gifted player, but did little to turn this football tanker around.

Despite this mistake, the Giants have another shot at a QB this spring. If you believe Boomer Esiason -- who knows something about playing the position in the NFL -- Dwayne Haskins would be the franchise quarterback they so desperately desire.   Even better, Haskins wants to be Big Blue's savior. If his social media posts are to be believed, Haskins, who played college ball at Ohio State, wants to come home and wear the Big Blue colors of his youth.

Indeed, Haskins recently posted a picture of himself in a Giants uniform. His advisors made him delete the post so it doesn't offend future suitors, but the statement was made. Haskins was born in Highland Park, NJ, a few long throws from Rutgers. He played high school ball in Maryland and even committed to Esiason's alma mater (Maryland) before hopping to Ohio State. Still, it seems Boomer has forgiven Haskins and would love to see Pat Shurmur and Dave Gettleman draft and develop the former Buckeye.

At 6-foot-3 and 220 pounds, Haskins has the contours for an NFL QB, including a strong arm and a penchant for winning and posting robust stats. At Bullis high school in Potomac, Haskins passed for 5,308 yards and scored 50 touchdowns. In his lone season as starter under Urban Meyer, Haskins took a giant eraser to the record books, eclipsing the Ohio State (and Big Ten) records by passing for 50 touchdowns, over 4,800 yards, while posting a 13-1 record and beating Washington in the Rose Bowl. (Only six players in NCAA history have passed for at least 50 TDs in one season.)

In the Big Ten title game, Haskins threw for a Big Ten-record  499 yards and five touchdowns in a blowout win over Northwestern at Lucal Oil Stadium. Haskins also won Big Ten Offensive Player of the year, was a semifinalist for the Maxwell Award, and was one of the three finalists for the Heisman Trophy.  And he posted all these gaudy stats while completing exactly 70 percent of his throws.

It seemed the best plan the Giants could summon was letting Eli decay for another year, 16 more weeks of being pounded in the pocket, and likely another 5-11 record. And no golden boy QB in the pipeline, just Kyle Lauletta and his arrest record. But the Giants have the sixth pick in the NFL Draft, while none of the five teams ahead of them -- Arizona, San Francisco, Jets, Oakland, Tampa Bay -- covet a quarterback with their first pick.

Which means the Giants can hope Haskins falls into their No. 6 lap, or trade up a few spots and make it even more likely they can bag Haskins with, say, the second or fourth pick. (It's unlikely that Big Blue will make draft deals with their MetLife roommates, the Jets.) If another team adores Haskins as Boomer does, then the G-Men would be well-served to inch up a few slots to ensure Haskins makes his way to the Meadowlands.

NFL QB is easily the most important position and hardest spot to predict in sports. Hulking young men with all the tools (Ryan Leaf) have flamed out in public and pungent ways, while small, discarded QBs (Drew Brees) have smashed records, won Super Bowls, and are surefire fits for a Hall of Fame jacket.

Which is Haskins? Or is he somewhere in that murky space in between? No matter, if you snare a QB with a top-five pick, he better be your starter quite soon. If the Giants like Haskins, he can kneel at the altar of Eli, absorb the playbook, and then sneak into a game around Halloween. Or perhaps sooner, depending on the team's performance.

Maybe Esiason, who cherishes Haskins's size, skill, and will, has no say on who plays QB for the Football Giants. But he surely knows more about the position than we do, or even the men making the decision. We can't say with any certainty that Haskins will be a star, but there's an excellent chance he's already better than Manning. At minimum he has 15 more years of football left in his arm. That should be enough to convince Big Blue to make a big move and court their next quarterback.