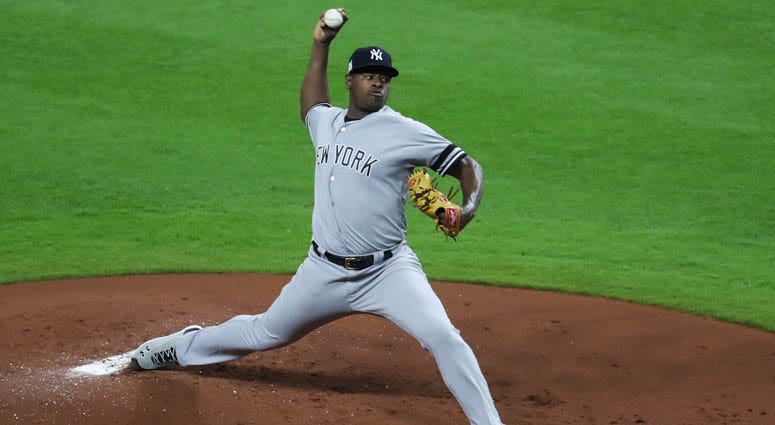 As the Yankees toil in their early exit from the MLB playoffs, it doesn't take Pinkerton Detective Agency to realize how they got here.

The Bronx Bombers were felled by the dearth of dominant pitching, particularly in their rotation.

Despite all the loaded lineups in the ALCS and NLCS, you're not seeing football scores in baseball's final four. Consider the Los Angeles Dodgers have scored two runs over their last 22 innings, yet still split two games with the Milwaukee Brewers after their 2-1 win, in 13 innings, in Game 4 of the NLCS.

No matter how many runs the Yankees scored, no matter they set the MLB record for home runs in a single season (267), the name of this game, especially in October, is pitching. And the pinstriped pitching faltered this fall. In seven league championship series games, the losing team has scored 18 total runs, or just two more than the Yankees gave up in Game 4 of the ALDS (16).

It doesn't help that the Astros bagged Gerrit Cole, and not the Yankees. Despite winning the World Series last year, Houston didn't settle for the same rotation, securing the best staff in the sport. Surely the Bombers could have used Cole's 15-5 record and 2.88 ERA this season. No doubt they could have used Cole while Luis Severino forgot he was the club's ace at the worst times. Houston and Boston are at least three-deep in superlative starting pitching, while the Yankees aren't even sure who should take the mound in Game 1 of a playoff series.

The Yankees can tweak their already nuclear bullpen all they want. But if they want to snap that symbolic membrane between the wild card and the World Series, they need a more robust starting staff. It's not an accident that three of the four remaining teams have a Cy Young-winning ace and high-end starters behind him.

Meanwhile, Masahiro Tanaka was the only Yankees starter to pitch at least five innings in the 2018 playoffs. And while clubs are inching toward going all bullpen for entire playoff games, we see that starting pitching still has a foothold on October. Look at Nathan Eovaldi, who baffled the Bombers in the ALDS, going six strong innings in Game 3 of the ALCS - reaching 101 mph on the radar gun - and becoming the fourth pitcher in Red Sox history to hurl at least six innings while allowing two or fewer runs.

While Bryce Harper and Manny Machado have been the trendy talk in the Big Apple, the Yankees have more than enough lumber to win another 100 games next year. Instead, they need to decide which starting pitchers will get them those last 11 wins.  Dallas Keuchel, Charlie Morton, Gio Gonzalez and Patrick Corbin lead a glittering list of free-agent pitchers entering this offseason. (Forget Clayton Kershaw, who can opt out after this season. The Dodgers have gotten his best years and he will cost any other club a biblical sum.)

Word is the Yanks are big on Corbin, 29, who went 11-7 with a 3.15 ERA this year for the Arizona Diamondbacks. Even if they sign Corbin, they still have work to do. The Yanks need to replace CC Sabathia - provided they are moving on from their old ace - and decide if they care to keep J.A. Happ, as well as Lance Lynn. The Yanks could even take another look at Eovaldi, who had a brief, injury-addled career in the Bronx. Or they can peek at 31-year-old Dodgers starter Hyun -Jin Ryu. Both have been vital to their teams' playoff success. Whatever they do, they need to pad their rotation to compete with Boston and Houston, who not only are playing for a spot in this year's Fall Classic, but should also be just as good next year.

The Yankees didn't have a single starter toss 200 innings this year, and Severino (191.1 IP) is the only starter who pitched more than 160 innings. By contrast, the Astros had three starters pitch at least 200 innings, and their fourth starter, Morton (167 IP), would have been second in the Yanks' rotation.

Hal Steinbrenner can talk about payroll prudence all he wants. He still added Giancarlo Stanton's epic contract. And the Bombers are too close to winning it all not to crack open the vault for a starter or two. Watching the Red Sox jump out 2-1 on the Astros should be more than enough incentive to poach some of their pitching, in case they forgot how they got bounced from the playoffs, or why.