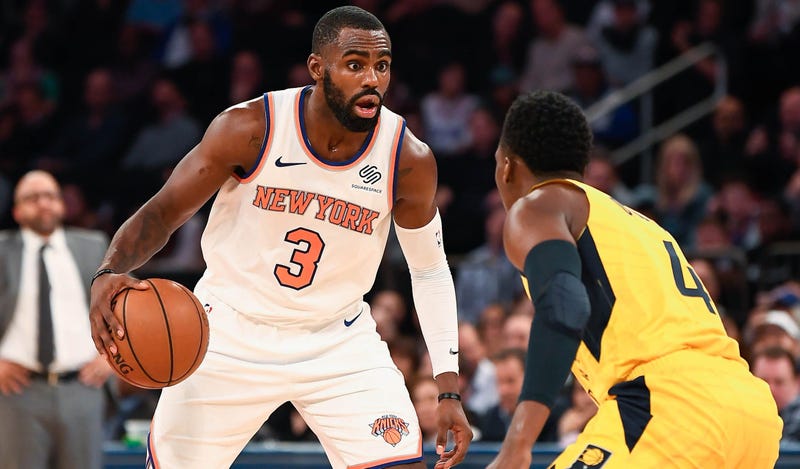 It is no secret the Knicks are in the middle of another rebuilding season, with all the attention on their first and second-year players and their development throughout the season. The biggest story, however, might be the improvement of Tim Hardaway Jr.

He is putting up All-Star caliber numbers.

Hardaway’s numbers and efficiency are even more impressive considering he is being used at a much greater volume than he has at any point in his career. His 20 field goal attempts are five more than his previous career high, which came last season. His 31% usage rate is similarly far and away higher than it ever has before.

Last season, when Hardaway was asked to do more than he had before, his efficiency numbers crumbled. He shot only 42% from the field and 32% from three. He managed to get to the free throw line only three times per game. His 17.5 points per game average might have been a career high, but he was not a consistently effective offensive player.

Schmeelk: It's Time To Find Out If Frank Ntilikina Is A Point Guard

This season, head hoach David Fizdale has asked Hardaway to be the team’s top scorer and playmaker and he has answered the bell. He is taking the most shots, and is getting the majority of touches at the end of games. He is even making decent passes as a playmaker. Heading into this season, it was fair to doubt whether Hardaway could be the third best player on a good team. If he continues to play the way he has through the first eight games, he can be the second scorer on a good team.

Hardaway’s improvement is important for a few different reasons. The obvious is that it takes pressure off some of the younger Knicks, and helps them compete (and eventually win) some close games. But perhaps more essential is that it makes his four-year, $71 million contract far more palatable and cost-effective.

If the Knicks manage to land a big fish in free agency like Kevin Durant, this version of Hardaway might be good enough to be the third best player next to Durant and Kristaps Porzingis for a significant playoff run. It would hasten the Knicks rebuilding process an awful lot, reducing the need to land another big fish.

Sustaining this level of this play would also make a trade involving Hardaway this summer much more possible. If another NBA team finds they come up empty in free agency, they might want to trade for Hardaway and simply slide him into their space, which would make sending an equal salaried player back unnecessary.

The Knicks could then use that space to chase another big-time player in free agency that might fit next to the other players on their roster better than Hardaway. He could also be involved in some kind of sign and trade agreement. If he plays to the level of his current contract, it opens up a ridiculous amount of new possibilities for the Knicks front office they did not have before.

Of course, it remains to be seen whether Hardaway can keep up these shooting numbers beyond the small sample size of just eight games. He is a notoriously streaky shooter, and one bad run could bring his numbers down to his career norms quickly. He has never shot better than 36% from three for an entire season before, and given many of the threes he is hitting this season are of a high degree of difficulty that number may go down. His increased free throw rate shouldn’t change with a reduced sample size, however, so that improvement in his game should be here to stay.

Hardaway’s play hasn’t been without flaws, either. His shot selection leaves something to be desired. He was stripped on three different occasions at the end of the game against the Pacers. He isn’t at the level of the better isolation scorers in the league. He gets most of his point off of screens and hand-offs. His defense has also been hideous. The Knicks give up more points per possession when Hardaway is on the floor (1.16) than any other player. It might be because he uses so much of his energy on offense, but his defense has been poor for much of the year.

Regardless, for Tim Hardaway Jr. to take such a large leap at the age of 26 has been a pleasant surprise early in the season. If it can continue, it gives the Knicks a lot more options moving forward in building their roster and could hasten their rebuilding process.

You can follow me on twitter at twitter.com/Schmeelk for everything Knicks, Giants and the world of sports.