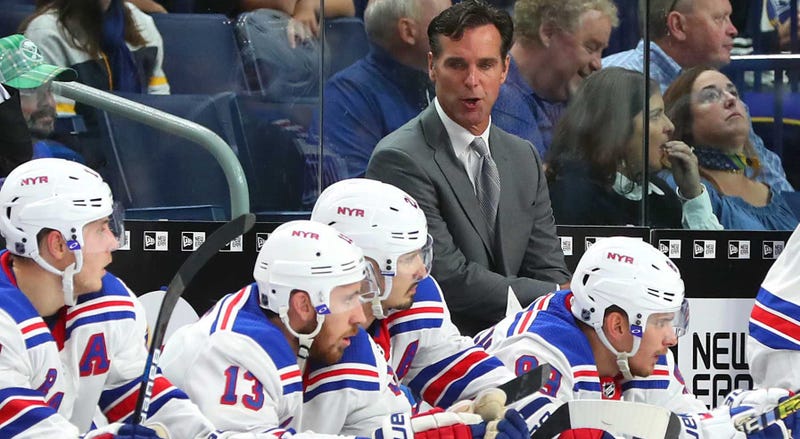 The Rangers showed they’re ready to play David Quinn’s way in Monday’s 4-3 overtime win. Quinn’s version of the Blueshirts plays with more of an edge, goes hard to the net and is willing to pay the physical toll needed to score dirty-nose goals.

There were hard-driving and active bodies in front when Steven Fogarty scored the game’s opening goal and throughout the contest. Vinni Lettieri eventually provided the overtime winner.

“I thought our guys did a great job getting to the net,” Quinn said. “Tonight was certainly a step in the right direction. We played much more purposeful hockey.”

The intensity has been ratcheted up by the demanding first-year NHL head coach, and the players are responding. Fans have seen a clear difference in the commitment and effort displayed this preseason.

During the final three years of coach Alain Vigneault’s tenure, the Rangers became too passive as a whole, shy to pay the price to score net-front goals and lax when defending their own net. Additionally, Vigneault’s “play whistle-to-whistle” mantra instructed players to bottle their emotion and skate away if an opponent leveled a cheap shot or dirty trick.

MORE: Hartnett: Would Be A Shame If McQuaid Trade Leads To DeAngelo's Departure

“It happened so fast, I don’t know if guys saw it, and we responded by winning the game, obviously, but there are other ways you can respond,” Quinn said. “It’s been discussed.”

Perhaps in Quinn, the Rangers have finally found the right balance behind the bench -- a demanding coach who is also a relationship builder in the dressing room, one who stresses up-tempo, puck-possession hockey while also championing an in-your-face attitude.

Think of a team that plays with the passion and work ethic of John Tortorella’s teams without the burnout that comes with constant own-zone defending. Vigneault’s teams at times were go, go, go without the necessary commitment to defense. Think of a team that has all five skaters involved in the offense without losing sight of structural discipline and a full 60-minute focus.

Tortorella was infamously too rigid with his defend-first ethics, while his combustible and suffocating nature either prompted players to tune him out or cause them to walk on eggshells. Vigneault, on the other hand, was the opposite. He left the policing of the dressing room to the players, and the teams of his final years lacked awareness and cohesion in the defensive end.

In Quinn, it seems like the Rangers might be getting a melding of Tortorella's and Vigneault’s best ideas. While Tortorella and Vigneault combined to deliver an era of sustained success and several deep playoff runs, their Garden exits were forced by their resistance to change.

Quinn proved he could appeal to his players during his five years behind the Boston University bench. It’s the early days, but it appears that this team is quickly buying into Quinn’s methods.

“I think if you look at the games, both games we’ve been improving a lot with this coaching staff,” Lettieri said. “All of the guys are buying in a lot. We like what’s going on here. The coaching staff and the players have to be on the same page for your team to go anywhere. If there’s not a connection there, you’re not going to go too far. Over this preseason, I’ve just been focused on getting better in the D-zone and the O-zone just so I can help my linemates out. I think that’s just what (the coaching staff) is harping on.”

At this point, it’s difficult to gauge how successful Quinn will be in his first year guiding the Rangers. There’s going to be some learning moments for this rookie coach and his young team. But if he can get the Blueshirts to totally buy in, it will help accelerate the process.