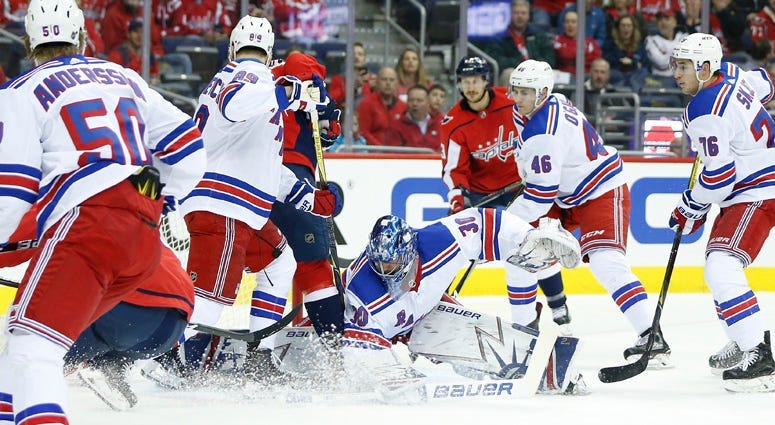 Henrik Lundqvist could have packed it in early and taken it easy, but that has never been his style. The 36-year-old netminder could have opted to shut his season down to rest his body ahead of the 2018 World Championships.

Lundqvist’s unwavering commitment to the Ranger crest was as clear as day throughout Wednesday’s 3-2 overtime defeat to the Washington Capitals. It was as if no one told Lundqvist that the Rangers are eliminated from playoff contention.

“It’s so frustrating to lose this game,” Lundqvist said. “We worked so hard, all of us. We all had something to play for and something to prove. It doesn’t matter where you are in the standings, you want to win games. You want to sit in here and feel good about a win. They came back in the end and got it. It bothers me.”

He looked like a goaltender who was moving heaven and earth to secure a playoff berth, rather than one who was playing in game that meant little in the standings.

The Metropolitan Division-leading Capitals tested Lundqvist with 33 shots in his return to game action. Plenty of the shots that he faced were difficult-to-stop, Grade-A chances. Don’t let his .909 save percentage on the night fool you. No. 30 was very much at the top of his game and nearly pulled off a regulation win.

It took a moment of individual brilliance by star center Evgeny Kuznetsov to earn the Caps a victory in three-on-three overtime. Earlier, Lundqvist stoned Kuznetsov on a first-period penalty shot. Kuznetsov went backhand and Lundqvist outstretched his mitt to glove the penalty shot.

Lundqvist had missed three consecutive games following a collision in his previous appearance against the Columbus Blue Jackets on March 20. Wednesday’s loss in Washington was also the first game of his career when the Rangers were already eliminated from playoff contention. (The Blueshirts were in contention until the final game of 2010, the only other year they missed the playoffs with Lundqvist.)

MORE: Hartnett: Andersson, Chytil Live Up To Hype In 1st Game Since Being Called Up

The goaltender who has carried this franchise like a colossus added another feather in his cap Wednesday. Lundqvist became the eighth goaltender in NHL history to appear in 60 or more games in at least nine different seasons. The others are Martin Brodeur, Patrick Roy, Glenn Hall, Curtis Joseph, Ed Belfour, Tony Esposito and Roberto Luongo.

Lundqvist has led the Rangers to the playoffs in 11 of 13 career seasons. The Blueshirts’ slim playoff hopes ended Tuesday night after the rival Devils defeated the Carolina Hurricanes. Lundqvist’s summer plans are unclear. He is yet to indicate whether he will participate in the World Championships, which starts May 4 in Denmark.

Commentators tend to marvel about the vital saves that Lundqvist has made under the playoff spotlight. The true mark of his character can often be seen in how hard he competes in practice and now, for the first time in his career, his desire to excel when nothing is on the line.