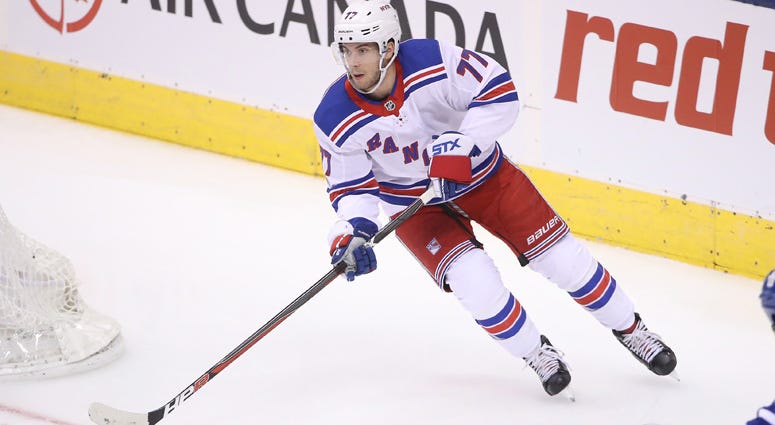 More than ever, NHL teams are benefiting in the long run by allowing talented young defensemen to learn on the fly at the highest level. With more teams trusting speed over strength and the promise of youth over experience, large-bodied defensemen over the age of 30 whose style of play is based on aggression are struggling to keep up.

Adam McQuaid earned a reputation as a dependable, team-first defenseman during his nine seasons as a member of the Boston Bruins. His game is not predicated on anything fancy. He tends to keep it simple, uses his strength advantage to win his share of battles and willingly drops the gloves in defense of any teammate.

The Rangers on Tuesday surrendered a 2019 fourth-round draft pick, a conditional seventh-round pick and fringe NHL defenseman Steven Kampfer to acquire McQuaid’s services. The 31-year-old defenseman has one year remaining on his current contract at a cap hit of $2.75 million.

McQuaid is certainly an upgrade over Kampfer. He immediately adds a measure of experience to a Rangers blue line that was trimmed of established veterans Ryan McDonagh and Nick Holden at last season’s trade deadline.

MORE: Hartnett: 5 Rangers Who Could Benefit Most From Quinn

Generally, competition is always a healthy thing. With Kevin Shattenkirk returning as the Rangers’ top-pair defenseman on the right side, that leaves McQuaid, Neal Pionk and Tony DeAngelo as the other right-handed defensemen figuring into the competition for two spots in the top-six. Left-handed defensemen Brendan Smith and Fredrik Claesson can also play on the right side.

The crucial factor to remember is that DeAngelo is no longer exempt from waivers. He would have to clear waivers to be assigned to the AHL's Hartford Wolf Pack should he lose out in the competition for an opening night roster spot.

A scenario in which the Rangers start next season with Brady Skjei, Marc Staal and Smith on the left side, Shattenkirk, Pionk and McQuaid on the right side and Claesson as a spare defenseman who can play either side would likely end DeAngelo’s time on Broadway. His upside is intriguing enough for other teams to pounce on him as a waivers claim.

DeAngelo’s returns in his first season as a Ranger were underwhelming. Eight points in 32 NHL games wasn’t what the Rangers were expecting. Keep in mind, six of those eight points came on the power play – so his even-strength total was just two points.

The 22-year-old defenseman’s disappointing first season as a Blueshirt could be attributed partially to injuries and the preferences of veteran-leaning former head coach Alain Vigneault. Now that Vigneault has been replaced by David Quinn, a rookie NHL with a track record of developing high-potential players, DeAngelo could stand to benefit from a clean slate and a coach who understands that players develop differently based on a variety of factors.

“To me, that’s a big situation in how they develop,” Quinn said. “You can’t develop every guy the same. Everybody’s different. It all depends on the situation.”

You wonder how much the Rangers stand to gain with McQuaid added to the mix. We’re talking about a defenseman who has already enjoyed the best years of his career, will turn 32 in mid-October and whose physical nature and willingness engage in fisticuffs and shot-blocking contributes to injuries. Few are expecting the rebuilding Rangers to contend for the playoffs. Should McQuaid fare well in New York, he could fetch a decent draft choice from a team looking to add an experienced, right-sided rental next spring.

Given that Quinn’s Rangers are under no pressure to win right away, why shouldn’t the Rangers allow DeAngelo the opportunity to show his stuff over a full NHL season? The NHL is very much an earn-it league, but there’s a chance that DeAngelo could figure it all out and, if he is given a fair amount of leeway, to prove himself at the NHL level.

DeAngelo must become something more than a power-play specialist. He’s going to need to contribute his share of even-strength production and iron out the deficiencies in his defensive game. If he gets it right, his explosive skating and instincts could make him an asset to any blue line with his prime years around the corner. He will turn 23 in late October.

If you’re a Rangers fan, you’d hate to see a guy like DeAngelo catch on somewhere else and thrive. He’s the kind of player you take a gamble on, especially on a rebuilding team with a coach in Quinn who will have the patience to live with DeAngelo’s growing pains in hope of summoning his full potential.