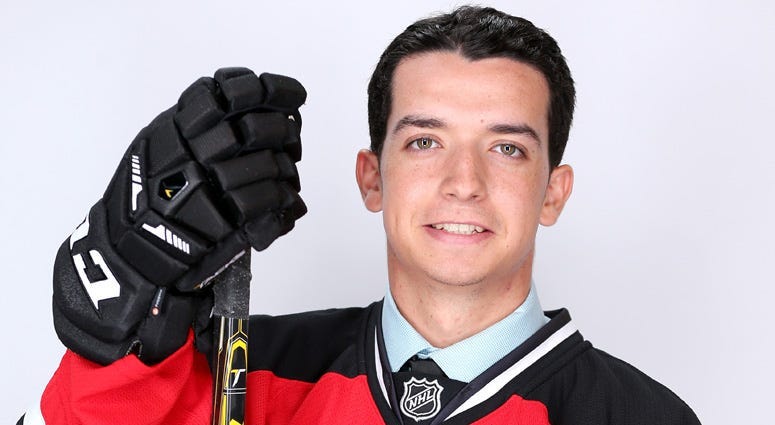 One of Devils coach John Hynes’ pet phrases is when he talks about a player who “gets to his speed.”

A lot of hockey players skate fast. Those that can use that speed in game situations — whether it’s transitioning into offense or creating turnovers on the backcheck — is what separates the levels from the elite all the way down to the borderline pro.

Devils left wing Taylor Hall, for instance, gets to his speed about as well as anyone in the NHL, which is one of the main reasons he was awarded the Hart Trophy as the league’s MVP last season.  Center Pavel Zacha, on the other hand, may not have Hall’s straight-line speed, but he has always been regarded as a fine skater with good acceleration.  What’s kept him from fulfilling his potential as a former sixth-overall pick in the 2015 NHL Entry Draft, in my opinion, has been all the times he has basically stood still on the ice, making it that much harder for him to get to his speed.

It’s as much about a guy’s motor and hockey IQ as it is about innate talent.

As I watched the opener of the Buffalo Prospect Challenge Friday night, I was much less interested in the result (a 6-4 loss to the host Sabres) than looking for players with attributes that fit with Hynes’ vision.  His “identity players” are hard on pucks and play 200-foot games.

And then they get to their speed.

I thought the player who best exhibited those traits on Friday was center Brett Seney, a relative unknown who was also impressive in the scrimmage at Devils Development Camp in July.  Playing against real opponents over the weekend, he again left me wanting to see more.

It wasn’t just the goal or primary assist he registered Friday, it was the manner in which he played.. On the power play goal, he ably entered the offensive zone with speed and, after the puck was funneled toward the net, he went into the hard area in front to bang home a rebound.  Later, he followed up on Blake Speers’ forecheck to pick up the loose puck at the side of the net and made a nifty backhand feed to Fabian Zetterlund to tie the game, 4-4.

(Side note: I also have liked Zetterlund’s game since seeing him in a few junior tournaments. The right winger has a little bit of Kyle Palmieri in him. Good burst, good stick, and a really good shot.)

Seney also drew a power play by pushing a puck at his own blue line past the Buffalo defenseman.  By getting to his speed, he was forced to be held up.

"Brett is fearless," Mark Dennehy, the new coach of the Binghamton Devils who ran the prospects Friday, said in his postgame media address.  "I thought that Brett played (well)--not just the goal, he was physical where he needed to be, made a great backcheck in the first period, played with a lot of energy."

Playing a back-to-back in less than 24 hours, Seney didn’t factor in the Devils’ 6-2 goal party over Pittsburgh Saturday, but he was a plus-one and had quite a few sequences where he used his speed to drive offense or hustled back to break up Pittsburgh scoring opportunities.  His quickness also drew two more minors. The Devils close out the showcase Monday against Boston.

Seney played 12 games at Binghamton after his college season ended in March, tallying three goals and five assists.  For those who flat out assume that's where he'll be ticketed this fall, I will refer you to Jesper Bratt, whose story is somewhat similar to Seney's.

Few ever heard of Bratt before he burst into the Devils’ lineup last season following eye-opening performances before and at training camp.  Seney may be two years older than Bratt, but both are about the same size and come from unheralded backgrounds as sixth-round picks (Bratt in 2016, Seney in 2015).  Bratt played in the Swedish "B" League while Seney toiled at Merrimack College, a lowly Hockey East program (coached by Dennehy).

Bratt’s speed and creativity was so apparent, it didn’t take long for Hynes to move him up to the top line with Hall and fellow rookie Nico Hischier.  Bratt hit the wall by midseason and was scratched in four of the five games of the Devils’ first-round playoff loss to Tampa Bay.  However, most believe he will return to training camp ready to show Hynes the skills and the fire to warrant a New Jersey sequel.

As for Seney, he's got a lo-oooong way to go to secure a roster spot on the big club this season.  He’d have to make it on a wing, since that’s where the openings are.  Besides, his faceoff skills appeared to need work.  Bratt excelled early last season on special teams, which Hynes must replenish after the offseason defections of penalty killers Michael Grabner and Brian Gibbons as well as power play net front presence Patrick Maroon.  Young players with PK experience like Joey Anderson and Speers, who each banged in rebound goals against the loose Penguins after underwhelming performances Friday, may have an edge there.  In many organizations, Seney might also have to deal with the first-round pedigrees of John Quenneville and Michael McLeod, but Hynes has heretofore given the ice time to the guys who earned it.

I missed on Bratt last summer, so count me as an early hopper on the Seney bandwagon.  He has Devils written all over his game.