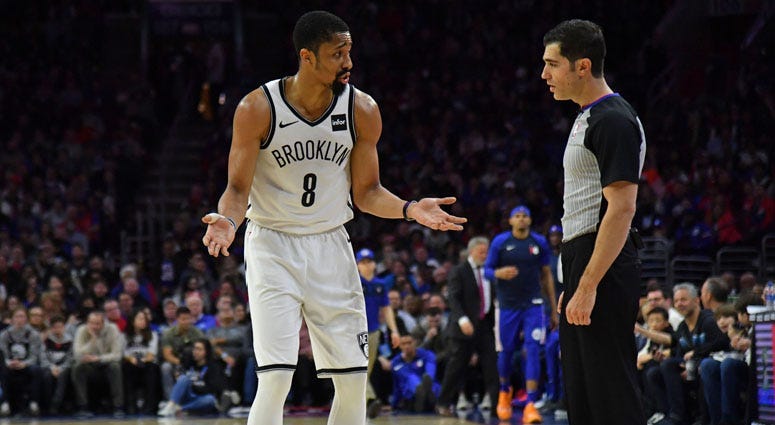 A common thread in the media, both mainstream and social, is that this Nets’ stretch run is their version of gaining playoff basketball experience even should they fail to qualify.

Brooklyn coach Kenny Atkinson also spread the spin in his remarks prior to the Nets’ 123-110 loss in Philadelphia on Thursday night that concluded a brutal seven-game road trip.

“At the end of the Portland game (a crushing 148-144 double-overtime defeat Monday), in the locker room, we talked about that,” Atkinson said. “Just how important for our growth, and going through a game like that, and the mistakes we made, and the good execution stuff we did. I just think it’s really going to help us in these upcoming games, and if we do make the playoffs, understanding how to close against these elite teams. It’s a great learning experience. I think it will help us going forward.

Make no mistake, these games against the recent higher-level competition have had a playoff-type feel -- but only because of the consequences to Brooklyn.

Not unexpectedly, the Nets have allowed their pre-road trip cushion to nearly evaporate after they won only two of those seven games. Brooklyn (38-38) sits in seventh place, a half-game behind Detroit, in a tight Eastern Conference race in which teams six through 10 are separated by just 2½ games. Ninth-place Orlando is just 1½ games from overtaking Brooklyn, when you factor in the Nets’ tiebreaker advantage.

The above complications translate into agony with every Nets defeat. Missing out on the postseason, while not the goal on Day 1 of training camp back in September, will feel devastating.

So, yes, the importance of each game requires a higher intensity than in past seasons when Brooklyn was playing out the string. And the quality of the teams they’ve played (and will play -- their next five games are at home versus Boston, Milwaukee and Toronto and then a road back-to-back in Milwaukee and Indiana) have been mostly playoff-bound, requiring heightened execution to merely hang close.

However, let’s not overrate this experience. This is still regular season basketball.

In the playoffs, for instance, the 76ers aren’t limiting superstar center Joel Embiid to 28 minutes like they did Thursday. They were able to, um, manage his load, because of the score -- Brooklyn trailed by double digits for the vast majority of the game -- and the unusual production they received from 7-foot-3 backup Boban Marjanovic, who supplemented Embiid’s 39/13/6 assault with 16 points of his own in 18 minutes.

(Here’s a hint for Brooklyn: How about scrapping the analytics that call for opposing bigs to be encouraged to shoot uncontested from 3-point distance? It’s not working. A game after Zach Collins and Enes Kanter combined to go 4-for-7 from deep in Portland, Embiid buried all three of his 3-point attempts and Marjanovic tacked on another, all in the first quarter that ended with the Nets trailing 38-23.)

Similarly, there is a chance that Brooklyn could face some of those above-listed opponents while they’re short-handed, as gearing up for the playoffs might be more of a priority for some of those teams over grinding out a relatively meaningless game by playing their top guns mega minutes. Like the Bucks, who have a four-game lead over Toronto for the best record in both the conference and the league and just saw MVP candidate Giannis Antetokounmpo exit Thursday’s victory over the Clippers in the fourth quarter with an ankle injury. The Celtics, Brooklyn’s next opponent Saturday, will be on a back-to-back after hosting Indiana on Friday. We’ll see how much Boston values making a run at fourth place with so many of their guys in and out of their lineup with injuries.

I would argue that Saturday is a must-win for Brooklyn. Even that, however, won’t make it anything like what happens in a best-of-seven playoff series.

When I asked Nets backup center Ed Davis, who is one of a handful on this team who has actually played in the postseason, whether playoff basketball will require his teammates to reach an even higher level, he said, “For sure. I feel like if we don’t (make the playoffs), we sort of had a letdown year.”

Davis knows that the playoffs require an extra level of focus, especially the longer it moves along. The familiarity makes it more of a chess match. You don’t have that attention to details about your opponent in the regular season, with adjustments and then adjustments to adjustments.

On the court, possessions matter more.  Like, for example, some of Nets point guard D’Angelo Russell’s throwaways and other poor decisions Thursday. He was 2-for-13 with five turnovers through three quarters. Flush it and move on to the next game of 82, right? In the playoffs, however, those miscues could swing a game, and thereby contribute heavily to ending a season. I’m still haunted by Deron Williams’ seizures in the clutch in 2015, the last time the Nets had their ticket to the playoffs punched.

It will likely take at least a 3-3 close for the Nets to break their drought. Only then will they be able to garner the real experience that would make this season special.