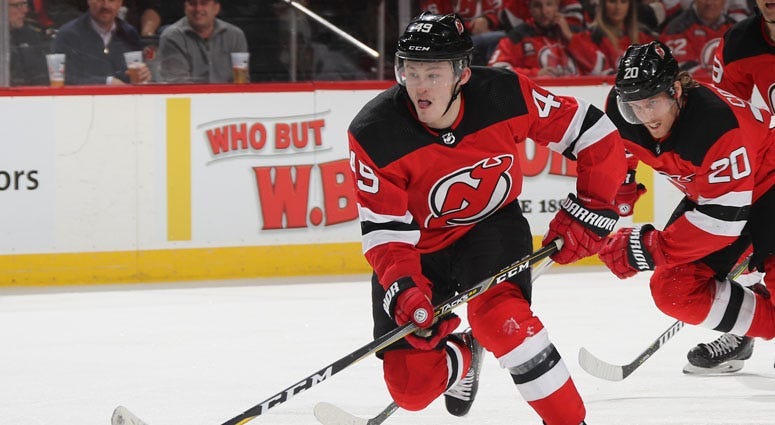 The Devils, with nothing to play for down the stretch, have been treating the final quarter of the season like auditions.

Players have been shuttling between New Jersey and AHL Binghamton, with defenseman Josh Jacobs becoming the ninth this season to make his NHL debut with the Devils in Thursday’s otherwise nondescript 5-1 home loss to Boston.

Jacobs replaced Colton White, who got in three games on the Devils’ trip out west last week before being sent back down to the minors Wednesday.

The Devils won’t bring up the “T” word, but a boatload of injuries to virtually every player on their roster with at least above-average skills has made it appear like they’re executing the tank to perfection. At 27-39-9, they actually have fewer points (63) than they did at the same point in 2016-17 (67), a season in which the entire organization has vowed to never repeat, even if it led to the lottery victory that enabled them to select center Nico Hischier (also injured) with the No. 1 overall pick.

However, if you listened to general manager Ray Shero on the "NHL Executive Suite" podcast with Deb Placey on Wednesday or coach John Hynes’ news conferences after most games, they swear that this season is nothing like the one from two seasons ago, the win-loss records notwithstanding.

That may be true in the sense that this team plays harder, but it has been no less excruciating to watch.

The lack of talent the Devils put on the ice in both seasons has been appalling. Yes, injuries weighed heavily on this campaign, including some that have deprived young players like John Quenneville and Nathan Bastian more extensive opportunities. As a result, quite a few of the recent call-ups are career minor leaguers who have not shown any semblance of the speed or skill necessary to play on a competitive team. The average age of the 18 skaters (I won’t even count goalie Cory Schneider, 33) facing the Bruins on Thursday was 26.2. That’s not that youthful. I would deem forwards Pavel Zacha (21), Michael McLeod (21) and Joey Anderson (20) as the only ones with real upside  -- which may or might not ever be realized.

Zacha, who is in his third full NHL season, returned to action Thursday after missing 16 games with a concussion. It’s his third one in four seasons, with his first occurring while in junior hockey. That’s a red flag for a player who will be a restricted free agent this summer, despite his obvious talents. The Devils missed his exceptional vision, which led to their only goal Thursday when Zacha duped Bruins goalie Tuukka Rask into thinking he would shoot from the right circle and then found Drew Stafford across the slot for the one-timer to trim Boston’s lead to 2-1 with just under five minutes remaining in the second period.

Many in the organization love Anderson, including Hynes, who gave him 18:11 of ice time versus Boston, tops among Devils forwards. He’s diligent in the defensive zone and is a battler. However, Anderson’s lack of production (two goals and two assists in 29 games) doesn’t warrant such glowing evaluations, in my opinion. Hynes has stated that he wants to see Anderson drive more offense. Still, it’s clear the brass views Anderson as a possible core piece for the future.

“(Anderson) looks a lot more confident,” Hynes said. “He got a lot of time (2:29) on the penalty kill -- his penalty kill has been excellent. I think his decisions are strong, he’s strong on the puck, and one of the things we really like about Joey is he’s an extremely competitive player in the hard areas, like along the wall in breakouts. He’s not getting the ice time; he’s earning it.”

McLeod, unfortunately, is showing all the signs of being a bust. Shero’s first-round pick (12th overall) in the 2016 draft, McLeod has neither the size to play like a power forward nor the speed/puckhandling ability to play a high-skill game. I’m not suggesting that the Devils give up on him. It’s possible he will mature both physically and in the mental aspects of the game. Faceoffs have been one of many problems for New Jersey this season, and only Travis Zajac has a better win percentage than McLeod’s 54.5 percent (53.8 percent on defensive zone draws) among Devils centers.

Zajac and Blake Coleman were the only other dressed Devils forwards who can be assured they will return next season. I would place center Kevin Rooney, 25, in the borderline category after his periodic showcasing of his size and speed at even strength and on the penalty kill in his 34-game NHL audition. Right wing Stefan Noesen, another pending restricted free agent, would have to eat a hard bargain to come back off such an injury-plagued and unproductive season.

As for the Devils’ defensemen, it’s been as big a disaster as I expected. Consistently hemmed in their own zone for lengthy shifts, the Devils have the league’s worst Corsi (44.2 percent) at five-on-five since Dec. 23, star left wing Taylor Hall’s last game before shutting it down with a knee injury.

As I’ve noted several times, Shero has not emphasized defensemen in his four drafts until selecting Ty Smith with his first-round pick (17th overall) last June. Reilly Walsh, who plays for Harvard, was the only other D-man Shero picked as early as Round 3.

Jacobs, 23, was a 2014 second-round pick. At 6-foot 2, 200 pounds, his physical style was a welcome sight on a team that normally takes more punishment than it delivers. He played a solid 14 minutes and change until his giveaway led to a garbage-time Bruins goal with 22 seconds remaining.

He could get another few games in this tankathon before it’s time for him to cede the stage for the next audition.