Jacob deGrom signed his five-year deal with the Texas Rangers late on Friday, leaving Monday to be the first chance any WFAN hosts had to react to the fact that the Mets’ two-time Cy Young Award winner was leaving town.

Boomer & Gio were the first up of the daily crew, and, well…don’t shoot the messenger, but Gregg Giannotti is not surprised.

“I think even if the Mets had gone and matched that exact offer, he still would’ve left, because he wants to be somewhere else,” Gio said of deGrom on Monday morning. “His agent had reached out to the Rangers and said deGrom was interested, so this is something he has been thinking about for a very long time.”

Boomer? Well, he’s happy Jake got his money, but he understands, too, that it was clearly deGrom, and not the Mets, who had no interest in a reunion.

“Good for Jake, he got his money; he started (his career) late and was lucky he got a chance to hit free agency like this, with all the injuries,” Boomer said, “but let’s face it: he did not want to be here, so you can’t be mad at the Mets. I know for a fact the Mets made a phone call and he did not return it; he had made up his mind.”

So if fans can’t be mad at the Mets, they can be mad at deGrom, right? Many might, but not Gio.

“I’m not going to hold it against him,” Gio revealed. “I know so many fans will say he could’ve been in the same breath as Seaver and Piazza, but I’m sorry to break it to you: most guys don’t care about that. They don’t. He felt like he got screwed on the first contract he signed and he has been hurt for a while, so someone was willing to give him that type of money at 34 years old, and in a state with no income tax…what are you supposed to do if you’re Jacob deGrom?”

Instead, deGrom got a little less next year in actual money at $30 million, but he guaranteed $7.5 million more in ’24 and a total of $75 million in 2025-26, and has another chance to cash in for 2027 if he stays healthy based on the parameters of the deal.

And to Gio, the Mets’ savings are simply better off being used elsewhere right now, because they are a team that won 101 games last year, 95 of them not started by deGrom. 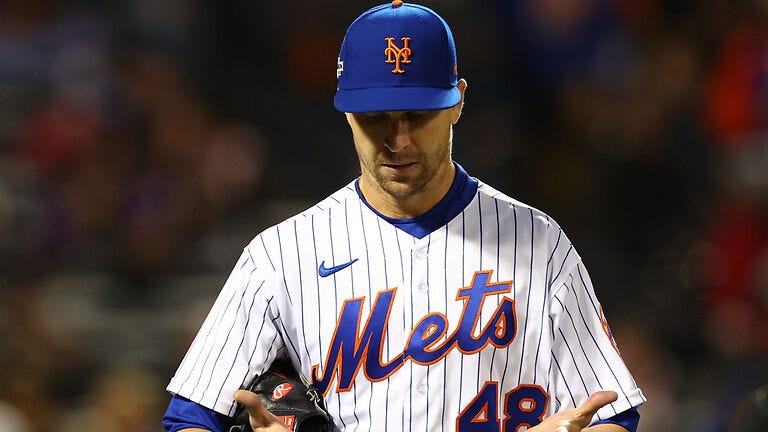 “Not everybody is worth every penny they get,” Gio said. “Yes, Jacob deGrom has been the best pitcher in baseball, and the Mets wasted those years while he was winning the Cy Young Awards. But the guy has not contributed for a long time in the last couple years because of injury, and now you’re going to give him all that money at 34 hoping he stays healthy? I’m sorry, but you get to a point with the money and the years where it’s not worth it.”

Apparently, that’s where Steve Cohen and the Mets got to, even if Uncle Stevie is the richest owner in the sport…because as we all know, money can’t buy happiness, or in this case, help you chase it.

“Everybody thinks that because it’s baseball and it’s an uncapped sport, you can spend and spend and spend and it doesn’t mean anything to anybody – but it does,” Gio said. “That competitive balance tax is prohibitive, and when it gets up to what they call the Cohen tax, it becomes VERY prohibitive! I don’t care who you are and how much money you have, you don’t want to do business that way.”