If there is still a beef between Kyrie Irving and LeBron James, it might be more lighthearted than we'd think given their interaction on Thursday night.

The Lakers and Nets went at it in a potential Finals preview, and the jabbing between the two sides started early. A technical foul was earned by Los Angeles after the Nets were called for a defensive three seconds violation, and with a lineup of LeBron, Alex Caruso, Kyle Kuzma, Talen Horton-Tucker and Montrezl Harrell out on the floor, the Lakers opted to let their future Hall of Famer take the free throw. And no, we're not talking about Caruso.

LeBron, a career 73.4 percent free throw shooter whose season average is down at 70.4 percent, couldn't hit get the shot to fall from the charity stripe, and Irving wasn't going to let that go unnoticed.

To be fair to Irving, Caruso, Horton-Tucker and Harrell are all shooting higher percentages from the line this season, albeit in smaller sample sizes. But to be fair to the Lakers... it's LeBron James.

Again, this was a more fun iteration of the some interactions we've seen between the two players, one of which occurred in the debut episode of "The ETCs with Kevin Durant," available on RADIO.COM. Irving spoke about being able to play with Durant for the first time in the then-upcoming 2020-21 season, calling it "the first time in my career" when he can trust another teammate to take clutch shots over himself. 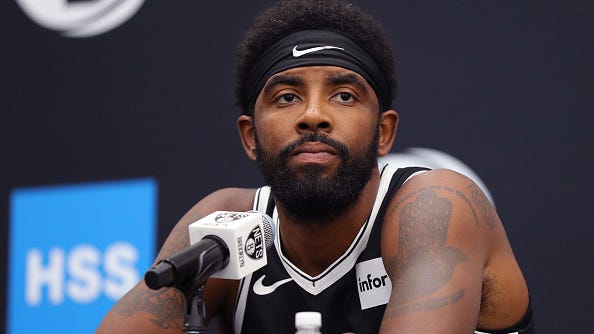 Kyrie Irving throws shade at LeBron James, says KD is best clutch teammate he has had

LeBron responded, saying that he was "hurt" by the aforementioned comments and that all he could really say after reading the full transcript of the conversation was one word: Damn.

He may have been saying the same word following 48 minutes of basketball on Thursday night, considering his 32-point effort wasn't enough to take down Irving, Harden and the Nets. Hopefully the next time these two teams meet will be when both squads are at full health, with Durant and Anthony Davis boosting their teams back to elite levels.