Though Steve Nash doesn't have any coaching experience, there are few players in NBA history with as much on-court leadership experience as the 46-year-old former point guard. However, one guy who could compete with him in that department is Dirk Nowitzki.

And according to Marc Stein of the New York Times, Nash spoke with Nowitzki about his interest in an assistant coaching role soon after Nash was hired by the Nets as their new head coach. However, Nowitzki said he doesn't want to return to basketball full-time so soon after he hung up his sneakers.

For a coaching duo with zero coaching experience, you couldn't ask for much more headiness and leadership than from the prospective pair of Nash and Nowitzki. Their on-court prowess is obvious: Nash is a Hall of Famer, with two MVPs and seven All-NBA nods under his belt, while Nowitzki will soon join him in the Hall of Fame after a career including 12 All-NBA selections and the 2006-07 MVP award. 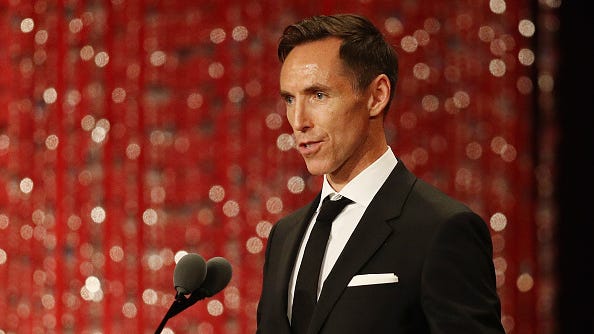 It also wouldn't be the first time that the duo of foreign-born NBA stars would have taken up roles on the same team. From 1998-99 -- Nowitzki's rookie season -- to 2003-04, Nash and Nowitzki were the stars of the Dallas Mavericks, building a rapport and a friendship that lasted throughout their entire careers and lives beyond the court. They took the 1998-99 Mavericks, a 19-31 team, out of the gutter, and brought an era of success that the franchise had not yet experienced to that point. From 2000 to 2004, the Mavericks were 222-106 in the regular season, a record that was behind only the Spurs and the Kings during that span.

The two have a very well-known friendship, as the team's official website labeled them as "two peas in a pod." Then-Mavericks coach Don Nelson went so far as to call them "inseparable."

"Off the court, we both had European backgrounds," Nowitzki said to Dwain Price of the Mavericks website in 2018. "His parents are English, and we talked a lot about soccer the first time I met him and that's how we kind of clicked. We're really, really close friends."

“Here, my first couple of years (with the Mavs) he always took me out of the hotels and out of my home so I wouldn’t get home sick. And he introduced me to a lot of his friends in his circle and I’m really thankful for that and I owe him a lot.”

Such chemistry and such a strong personal bond obviously factored into Nash's decision to pick Nowitzki's brain about it, but the timing doesn't seem to align with Nowitzki's current goals. However, we certainly wouldn't rule out a reunion on the sideline in the future.

Just because Dirk didn't want to get back into the game full-time right now doesn't mean he won't in a couple years. And if Nash can lead the Nets to success -- which isn't unlikely, given the star power on the roster -- the allure for Nowitzki to join him on the bench will be tough to turn down.