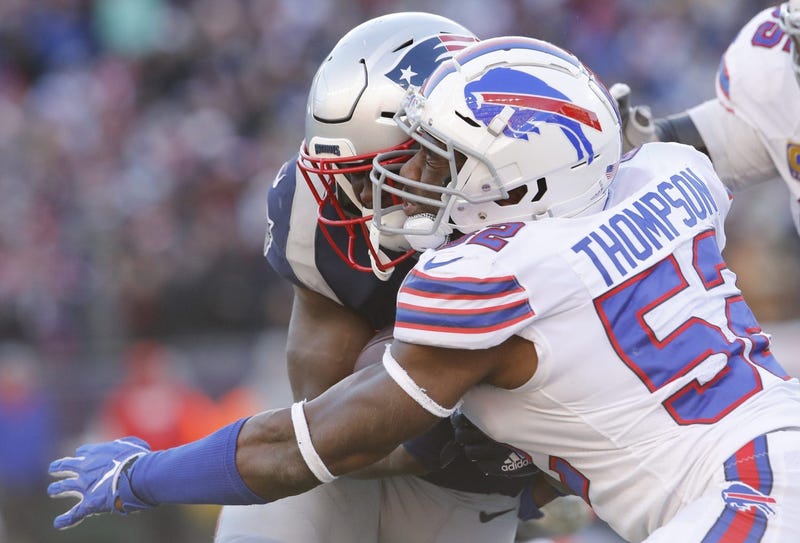 Orchard Park, NY (WGR 550) - Corey Thompson wasn’t drafted out of LSU, so the Bills signed him to the practice squad last season. With an injury to Matt Milano and the release of Ramon Humber, Thompson was added to the active roster for Week 12.

Thompson had a big game against New England, making nine tackles and forcing a fumble. He said being with the Bills has really given him a chance to show what he can do, “It’s been everything, I’m thankful for being here and I try to show that every day by working hard.”

With Jerry Hughes sitting out Thursday’s preseason game, Thompson got the start and handled himself very well. The 25-year-old said playing well in that Patriots game helped give him the confidence to excel this season, “It was a great opportunity for me to learn and get better and really get comfortable out there.”

In the few games I’ve seen Thompson in and during training camp, this is a guy that doesn’t get caught out of position. Against the Colts, he stayed home and stuffed two different runs. He said it’s how they all play on defense, “I’m just constantly trying to improve and trusting my teammates to be in the right spot and not getting outside of my gap and just focusing on just doing my job.”

The Bills defense was one of the top defenses last season and that doesn’t happen by accident. Thompson said it’s starts in the meeting room, “You have to have a chemistry going into each game, so it’s really important to get extra film in with your teammates and do things outside of the building as well, so as long as a team has chemistry, then a team can accomplish as much as they want.”

Jerry Hughes is one of the leaders of the defense. Thompson said he keeps his mouth shut and his eyes open, which, in turn, teaches him a lot, “He’s a guy I look up to and it’s fun seeing him go out and do his thing and he’s done it for so long, so I’ve learned a lot from him just by watching him play, watching the difference he makes in the game and not just him everybody in the room.

“I have fun just watching different people do their thing on the field and I just try to bring what I can bring to the table.”

The team is off on Saturday and will be back on the field in Orchard Park on Sunday.