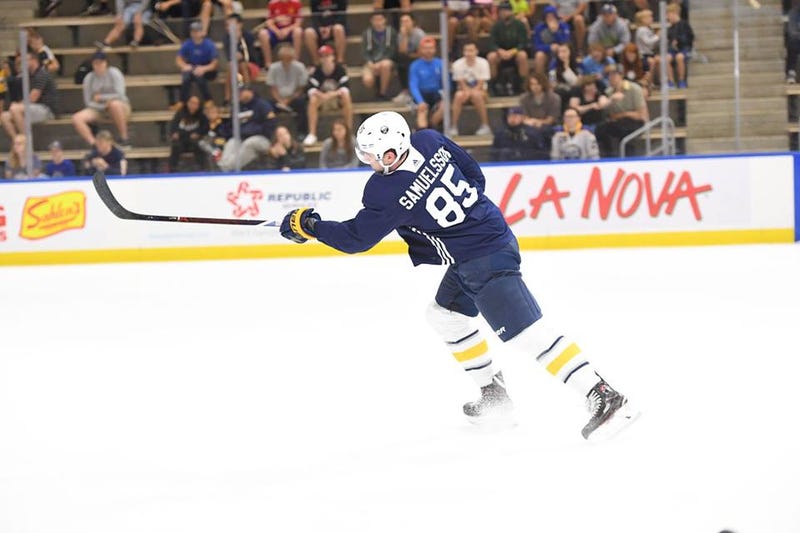 The Buffalo Sabres announced on Tuesday that defenseman Mattias Samuelsson has signed his three-year entry-level contract with the organization.

The Buffalo Sabres have agreed to terms with defenseman Mattias Samuelsson on a three-year, entry-level contract. pic.twitter.com/oAuPtnFp8T

Samuelsson just completed his sophomore season at Western Michigan University, where he scored two goals and registered 12 assists for 14 points in 30 games. He was also named a finalist this season for the NCHC Defensive Defenseman of the Year, but that honor went to North Dakota defenseman Colton Poolman (Calgary Flames).

In his two seasons with the Broncos, Samuelsson ended up scoring seven goals and picking up 19 assists for 26 points in 65 collegiate games.

The 20-year-old defenseman was the the first pick of the second round by the Sabres in the 2018 NHL Draft out of the United States National Team Development Program. The 6-foot-4, 220-pound blue liner is best known for his size and his ability to contribute at both ends of the ice. While he does not possess blazing speed from the back end, but he is a smooth skater and is physically strong on his feet.

The native of Voorhees, New Jersey has represented the United States twice at the IIHF World Junior Championship, playing in the 2019 and 2020 tournaments where he was a silver medalist in 2019 in Vancouver, British Columbia. In 12 games overall with the U.S., Samuelsson did not register any points, but was a plus-6 overall.

“We are very pleased with Mattias’ growth both at Western Michigan and on the international stage," Sabres general manager Jason Botterill said in a team statement. "He possesses a unique combination of size, speed and skill, and we look forward to working with him on his next steps as a pro.”

Samuelsson is the son of former NHL defenseman Kjell Samuelsson, who played 14 seasons in the National Hockey League and took part in over 800 games with the New York Rangers, Philadelphia Flyers, Pittsburgh Penguins and Tampa Bay Lightning.