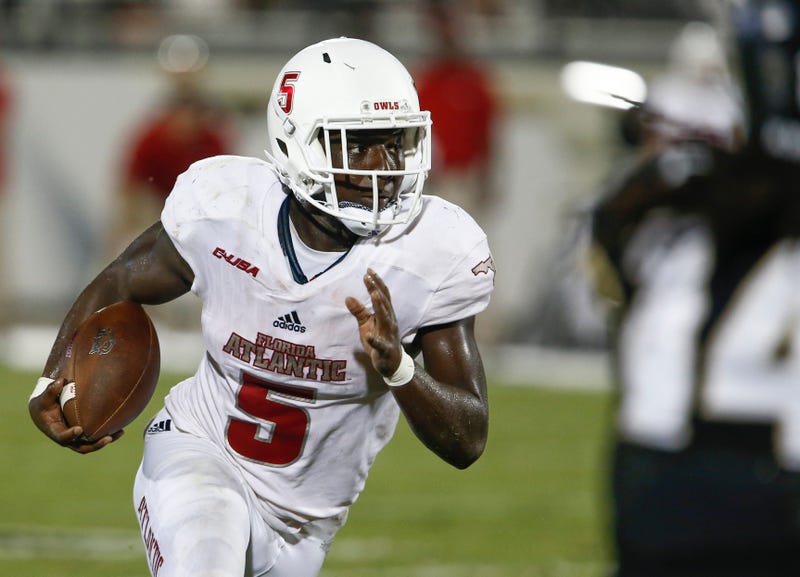 Shortly after the Buffalo Bills made Devin Singletary a third round selection in this past month’s NFL Draft, general manager Brandon Beane said the running back had the “funnest” film he had watched during the pre-draft process. Two weeks later, the Florida Atlantic product also said he had fun - multiple times - to describe his first day on the job in a Bills’ uniform.

“It was fun,” he told reporters after Friday’s rookie minicamp. “I had a lot of fun. I enjoyed today. Still lot of learning to do, but I had fun.”

Friday was the only day the media was given access to the three-day minicamp, but Singletary and his rookie teammates were on the field Saturday and Sunday, as well.

However, the next time he walks into the running back room, Singletary will be joined by LeSean McCoy and Frank Gore, who have a combined 24 years of NFL experience. That's three more years than Singletary's own age of 21. It will be a much different atmosphere, but one the rookie is very aware of and looking forward to.

“That’s big,” he said of joining a backfield of McCoy, Gore, and former second round pick T.J. Yeldon. “I grew up watching those guys, so I’m looking forward to meeting those guys and getting to work with those guys and I know I can learn a ton from them.”

When Beane talked about Singletary the night he was drafted, he said “the guy’s got some amazing vision, rare vision, lateral quickness, and his instincts,” when expanding on why he was so fun to watch. “If this is 10 (signals up), they’re up here (signals higher), and they’re very rare. Rare instincts, rare vision for the position. He’s a smaller guy, wouldn’t call him a home run hitter, but he can make guys miss in a phone booth."

Interestingly, those traits are often the same that are used to describe McCoy, a back the 5’ 7" and 203-pounder has often been compared to, as far as his running style. Singletary’s heard that before, and said he’s watched plenty of both McCoy and Gore over the years and has taken a lot away from each.

"The shiftiness from McCoy, the balance part,” he said of what's he's seen from Shady. "Then playing in the inside from Frank. Just the way they carry themselves, as far as how they go about their business. They’ve been in the game so long, so obviously they’ve had to be doing something right.”

Singletary scored an astonishing 66 rushing touchdowns in just three years at Florida Atlantic University, but the Owls went 5-7 overall and didn’t play in a bowl game. So Singletary’s season - and college career - ended Thanksgiving week last year. He’s gone over five months without playing any kind of real football with teammates, coaches, and players. So this week was a welcome relief, and a fun one.

“Beyond nice,” he said when asked if it was nice to finally be out on the field playing football as opposed to simply training for it for the last several months. “That’s why I said I had fun today. I didn’t have a helmet on since around November, so it was definitely fun to get back out here and be actually playing football than actually trying to be a sprinter or something.”

Here's a look at those fun highlights Beane is referring to:

Devin Singletary had a legendary college career with @FAU_Football and will be suiting up for the Bills on Sundays! #NFLDraftFULL 2018 HIGHLIGHTS ⤵️ pic.twitter.com/YiUQIRhHNe