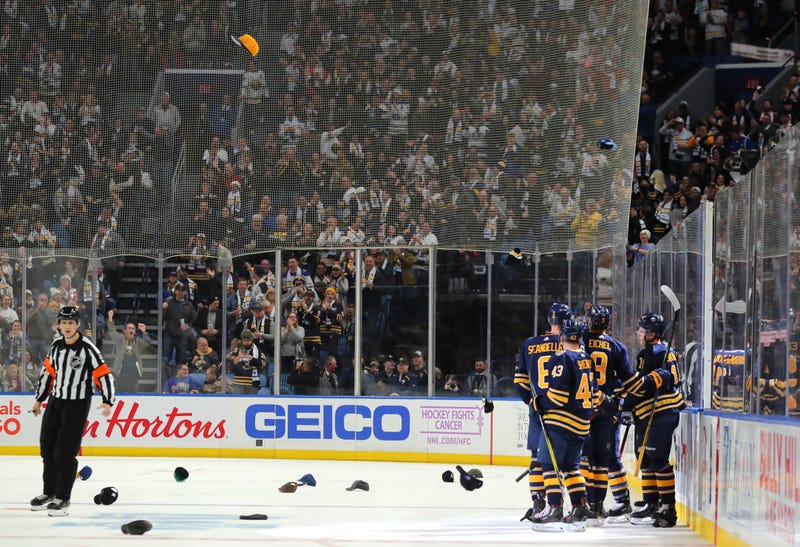 The 2019-20 Buffalo Sabres season has been a trying one to some fans around the Western New York area.

The Sabres currently sit with a 26-24-8 record and 60 points in the Eastern Conference standings, which has the team eight points behind the Toronto Maple Leafs for the third and final playoff spot in the Atlantic Division.

Even though the struggles on the ice have had some fans feeling unsettled, the organization's recent off-ice problems have also been the focus of discussion surrounding the fans. The in-game experience has lacked in the past, which may be a product of the team's absence in the Stanley Cup Playoffs for eight consecutive seasons, but some fans believe that the Sabres could be doing a better job of providing a better product regardless of the on-ice play.

Sabres Vice President of Business Administration Kevyn Adams joined the Howard and Jeremy Show on Friday to discuss some of those concerns with the fans.

Adams on the organization's understanding of the frustration from the fans:

"Saturday I was there when the fans were out in the plaza. I walked around, I talked to people, and to be honest, thanked them because the passion is there. We all understand that we're fortunate to have such a passionate fanbase. We get it, we understand where they're at. Obviously I'm in a unique position being from here and growing up going to the Aud, and Gilbert Perreault was my guy. I totally understand how engrained this passion is in the community, and I need to make sure everybody understands that no body has invested more into this team and into this community than Terry and Kim Pegula. They're completely engaged, they understand the frustration, they share in it. We're all in this together. That's the message from Terry and Kim down through the organization is we're all a piece of the puzzle, including fans, players, the front office, it all has to work together. That's been the message."

Adams on their messages that come from ownership:

"They're as accessible and engaged as they've ever been. Just from myself and the business side of the organization, we talk on a daily basis with Terry and Kim. I know that [general manager] Jason [Botterill] does as well on the hockey side. What should give fans hope is that we're being challenged by the Pegulas to figure out every year of our business to make it better. What can we do through league metrics, studying around the league? Where are we with certain things compared to other teams in the league? Where are we with our fan surveys? What are our fans telling us? How can we improve? Even our own analytics say, okay, what are these saying to us and how can we improve the fan experience? These are all ongoing conversations that come from Terry and Kim at the top. I just think it's really important that our fans understand that just because they haven't set out and held a press conference doesn't mean they're not engaged. They love this team, love this community, and they're all in."

Adams on the fans' concerns with the challenges throughout the 50th season:

"There's been some things that have happened here, but it's been a phenomenal of celebrating this great organization. The theme nights, the decade nights have been really well received. Our alumni have been thrilled to come back, so for me, the '70s and '80s Nights, a lot of these guys I watched. And I didn't want to make them feel old, but I said, 'guys, you know it's cool to be in the room with you guys and thanks for back.' And all the way through to last night, I thought it was a great celebration, and we obviously have more to come."

Adams on his interactions with the fans:

"I think it's part of our responsibility as an organization is to look people in the eye, listen and understand their frustration and say, 'we're with you.' We know that we need to be better in every area of our organization. Terry and Kim on down through the organization all feel that way. I just felt it was important that staff members were there and walking around and saying hello. There are markets in the National Hockey League that would die to have fans that passionate that are willing to either call into radio stations or stand out in a plaza in 15-degree weather. For me, that's easy. Those are the things that we want to be sure that we're out there, engaged and talking and listening."

Adams on maintaining a strong connection with the fans:

"It is probably the most important thing we can do right is being engaged and listening. I believe, and this is such a great hockey community, that the five/six-year-old that listens to R.J. [Rick Jeanneret] or watches Jack Eichel score a big goal is a fan for life. We have to, as an organization, be putting ourselves in a position where we are learning from fans. There's no better person to sit down and talk to than someone, whether you're sitting in the 300s, sitting in a suite, sitting along the glass. They all have a different perspective, they all are spending their hard-earned money to come and watch our team on the ice, but also to give us feedback on the team experience."