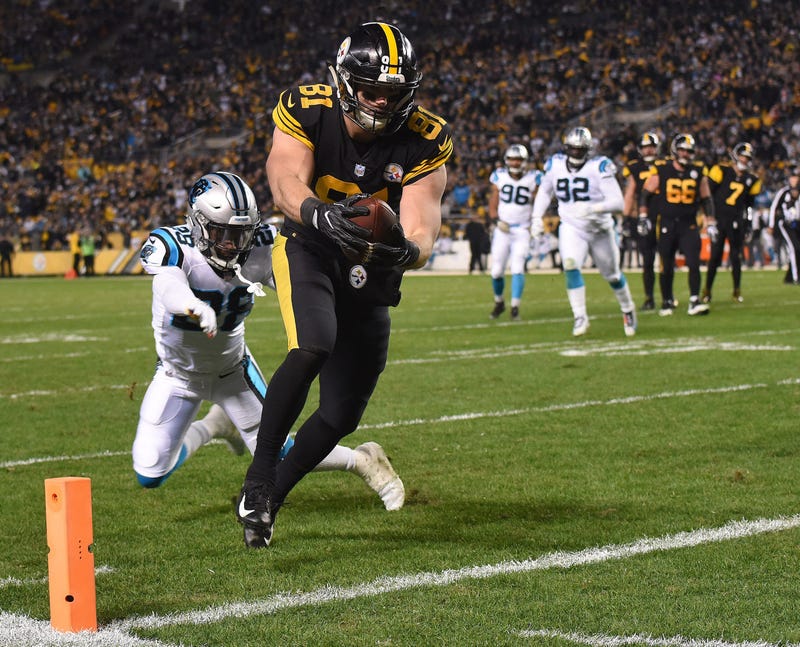 With NFL free agency set to kick off in one month, there is a lot of speculation that the Buffalo Bills will move on from tight end Charles Clay. Fellow tight end Logan Thomas is a restricted free agent, and Jason Croom emerged as a fine pass catcher last season, but is not quite the blocker needed for the position.

All of that means the Bills could very well be in the market for not only one, but maybe multiple tight ends this offseason.

Here’s a look at eight of them who are about to become unrestricted free agents and how they might or might not fit the Bills. I’ve enlisted the help of a couple of writers/reporters who have covered the teams some of these players are on. Their overviews and opinions are noted.

Considered, by many, to be the best free agent tight end available, Cook is coming off a big year, catching 68 passes for 896 yards and six touchdowns. At 6’ 5” and 254 pounds, he’s always had the measurable and ability to be a standout at the position. However, he’s already been on four teams in 10 years, probably because he’s never really had the kind of season he did last year and had too many dips in production along the way. With that said, he’s still caught at least 50 passes four times and collected over 600 yards six times. At his age, he’s not a player you’re going to sign to a long-term deal, but rather one that you feel you can win with him within that window of the contract.

Jesse JamesCurrent team: Pittsburgh SteelersAge at start of season: 25
James is right up there with the head of this free agent tight end class. Considering his age, some believe he’ll be the most sought after tight end on the market. After a rookie year in which he didn’t contribute much, he became a reliable, steady pass catcher for Ben Roethlisberger when called upon, hauling in 112 catches for 1,133 yards and six touchdowns over the last three seasons.  Here’s what Jon Ledyard of The Draft Network, who also covers and follows the Steelers, wrote about James:

“Big, slow, smart versus the zone, and knows where to sit. He’s terrific in scramble drills, which is big for Josh Allen. He’s unathletic and won’t win many contested catches or do much after the catch. Has improved as a blocker. His natural size allows him to be solid, but he’s not overly aggressive. He’s quiet, has zero personality. He’s a capable No. 2 tight end but also working with offensive line coach Mike Munchak and that unit helped. He’s definitely not a No. 1 tight end option.”

Williams’ stats are not going to “wow” you, with only 16 catches for 143 yards last year, and only 63 grabs for 497 yards for a four-year career (counting one injured season in which he only played four games and did not catch a pass). However, those numbers are also a function of the Ravens offense that liked to use several tight ends, and the fact they drafted two tight ends in the first three rounds last year (Hayden Hurst in Round 1 and Mark Andrews in the third). Between those three and fellow free agent-to-be Nick Boyle, all were on the field for between 23-54-percent of the snaps last year. When Williams has the ball thrown his way, he catches it. Over the last two seasons, he’s only had 35 targets and caught 31 of those passes. The Bills need a reliable pass catcher at the position, even if it’s not a full-time, every down player. The concern with Williams is injuries. He’s missed multiple games every year in the league so far.

Just like they did last year, the Ravens drafted two tight ends in 2015 - Williams and Boyle. Now, both are set to become free agents as Hurst and Andrews take over. Boyle has been more of a blocking tight end, and some even look at him as a fullback-type of player, but he has good hands and has contributed in the passing game, catching 51 passes for 416 yards over the past two seasons. Of all those tight ends the Ravens had, Boyle saw the field the most, lining up for almost 55-percent of the offensive snaps. They trusted him to perform multiple roles. He would be a really nice addition to a Bills offense that also needs to run the ball better, and give a sneaky option to catch it, as well.

Seferian-Jenkins is a very intriguing player. He was arrested for DUI both in college and in the NFL. The latter led to his release by the Tampa Bay Buccaneers in 2016. He admitted to having an alcohol problem and entering rehab. He then went on to play for the New York Jets in 2017 and had a nice season, catching 50 passes for 357 yards and three touchdowns. He signed a two-year, $10 million contract with the Jaguars last offseason, but was placed on injured reserve after only playing five games. The Jaguars did not pick up the second-year option on that deal, making him a free agent. The 6’ 5” and 262-pounder is an incredible athlete. He played both football and basketball early on at the University of Washington. He’s a solid redzone target and has become a better blocker through his time in the league. If his troubles are behind him and he can stay healthy, Sefarian-Jenkins could be a terrific addition to the Bills. He’s probably the biggest risk/reward tight end in this free agent class.

The Cincinnati Bengals have three interesting tight ends who are set to become unrestricted free agents. I asked Joe Goodbery of The Athletic Cincinnati and Locked on Bengals podcast for a breakdown on each. His notes are included for each of them:
Tyler EifertCurrent team: Cincinnati BengalsAge at start of season: 29

Eifert bursted into the league with a 2013 rookie campaign of 39 catches for 445 yards and a pair of scores. Then he got hurt and missed all but one game his second season. He bounced back with a huge 2014, catching 52 balls for 615 yards and a whopping 13 touchdowns. More injures caused him to miss eight games in 2015 and it’s been pretty much the same ever since. He’s played only six games over the past two seasons. I’ve always liked Eifert, and he’s a very talented player. It’s just to the point now where you have to wonder if he will ever be able to stay healthy and play a full season, or even close to it.

Here’s what Joe Goodberry wrote about Eifert: “When healthy, and that's not often, he's as good as any receiving tight end in the NFL. His athleticism, ball skills and route running are that of a big receiver, and the Bengals used him that way. When he was on the field, everyone else benefited.”
Tyler KroftCurrent team: Cincinnati BengalsAge at start of season: 26

When Eifert got hurt in 2017, Kroft became Andy Dalton’s No. 1 tight end, and he put up good numbers, catching 42 passes for 404 yards and seven touchdowns. Even with Eifert out again, he couldn’t duplicate those numbers because of injuries of his own.

“Also dealing with injuries in three of his four seasons, Kroft's development has suffered because of it. Used more as the inline tight end in their offense, Kroft can block on the line, but has often gets overpowered. He has good vertical speed, but isn't the type to adjust and make the crazy catch to poor passes. Otherwise, he's a solid receiver and an ideal number two that I believe still has some upside if he stays healthy and develops.”

It was Uzomah who became the beneficiary of more targets and catches after the inquires to Eifert and Kroft last year. He finished the season with 43 grabs for 439 yards and three touchdowns. He also played the full 16-game season.

Here’s what Joe Goodberry wrote about Ozumah:
“Very raw coming out of Auburn, Uzomah was a wide receiver being coached by the running back's coach. In the NFL, every single year he has shown a leap in development. From learning how to block, to becoming a staple on special teams over the last two years, Uzomah has worked his way into becoming a well-rounded asset. He's still a bit inconsistent as a blocker, but he's strong enough and athletic enough to overcome it. As a receiver, Uzomah is a bit robotic. He doesn't adjust well, isn't a natural pass catcher and can give away his routes early. Having said that, he is a load to bring down, has good straight-line speed and threatens vertically.  If I were to invest in one of these three [Bengals] tight ends, it would be Uzomah. He has shown consistent development, toughness, willingness to work and has enough natural ability to believe there's more on the horizon that he will attain.”