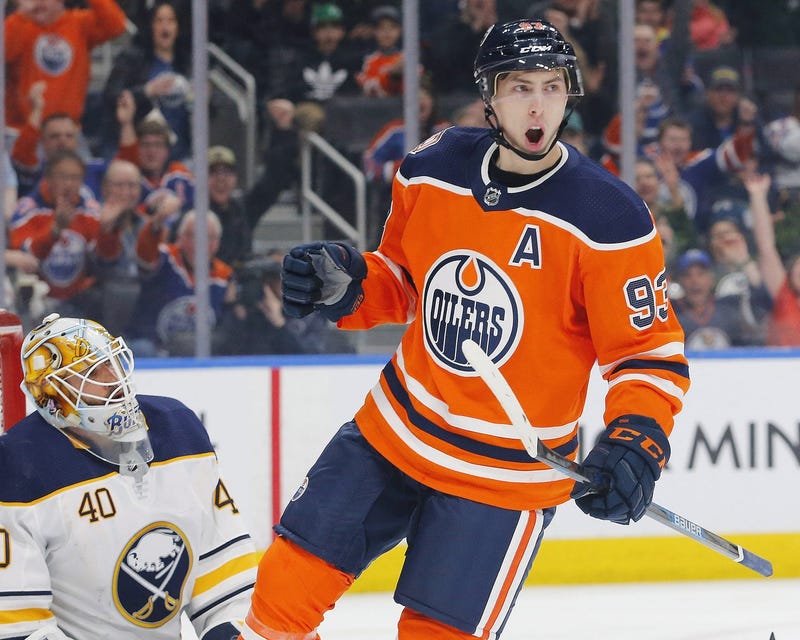 At the end of last season, Ryan O'Reilly was the name people started latching onto with trade discussions. He ultimately was traded, and, yet again, the Buffalo Sabres find themselves struggling not to finish in the bottom-five of the National Hockey League standings.

It seems as though the most interesting trade candidate on the Sabres this offseason is defenseman Rasmus Ristolainen. Not good enough to be apart of a list of untouchables, while also being good enough to have value to other teams.

A similar situation is going on with the Edmonton Oilers right now and with center Ryan Nugent-Hopkins. The former first overall pick in the 2011 NHL Draft is the subject of plenty of articles and trade conversations on social media.

sorry but this isn't new news. Trading Nuge? There are lots of teams looking for centres but I agree you don't trade a C for a winger. You trade a C for a top pairing D which is why an RNH for Buffalo's Ristolainen scenario is out there. https://t.co/SKYB5wBtjU

It might be interesting that Matheson says a Ristolainen for Nugent-Hopkins scenario is "out there". Does it mean that it's "out there" in terms of being talked about by teams around the league, or is it just circulating around social media and fan chatter?

Matheson suggests that trading Ristolainen for Nugent-Hopkins may be a fit for the Oilers, but would it be for Buffalo?

Nugent-Hopkins is not the generational talent that many first overall picks are touted to be now-a-days in the NHL. He was the first pick in a 2011 draft that featured a lot of very good player at the top, but no elite players.

This season is the first time he's cracked 60 points in a season, with 61 in 75 games. Nugent-Hopkins is not a No. 1 center in the NHL, but the Sabres don't need a No. 1 center with Jack Eichel in the fold. They need a No. 2 center behind him.

A career-high in points has come for Nugent-Hopkins this year playing all over the lineup. He still plays lots of center, but the line he's played most on this season is centered by Connor McDavid, which is a great stat booster for anyone.

His versatility would allow him to either play second line center until Casey Mittelstadt can, hopefully, take over that role, or slide to the wing in a top-six spot, or be the best third line center the Sabres have had in a very long time. There'd be plenty of options.

One thing the Sabres need on their power play is a skilled player to play the opposite flank that Eichel does. Rasmus Dahlin has played that spot the most this season, but it would be in the Sabres' best interest to have him at the point going forward. Nugent-Hopkins could fill the other flank spot as a left shot.

The Oilers have Nugent-Hopkins locked up for two more years at a $6 million cap hit before he becomes an unrestricted free agent at the age of 28. The Sabres might have to give him a longer deal than you'd want to give a 28-year-old in 2021, but that's not a big enough issue to not do a trade.

The potential deal being talked about is Ristolainen for Nugent-Hopkins. That's trading a solid second-pair defenseman for a solid second line center. Fine. Fair.

With Dahlin coming into the fold, Ristolainen could finally slide back to a role he always should have been playing. Lesser minutes, lesser matchups, second power play unit. I'd prefer to hang onto Ristolainen to see what he would look like in that spot, but if the value is there, he's certainly not untouchable.

Nugent-Hopkins would be sufficient. He fills a big need that the Sabres have right now in secondary scoring. Not including Eichel, the Sabres' biggest hole this season was not having any sort of offense from their centers. Evan Rodrigues, Mittelstadt, Johan Larsson, and Vladimir Sobotka have combined for just 31 goals this season, only six more than Nugent-Hopkins has on the year.

At the end of the day, fans would probably love this move. I'd want them to do it, but it's not some slam dunk. You're acquiring a 50-point forward in exchange for a 40-point defenseman.