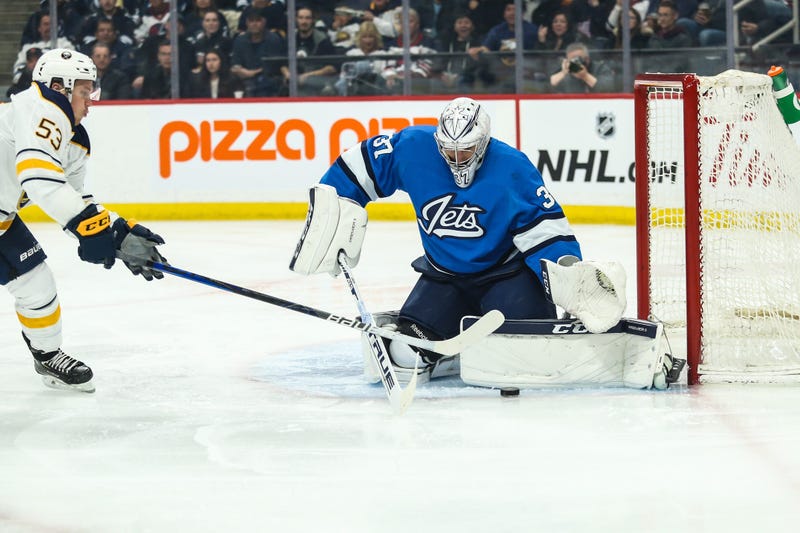 Early on in the first period, the Sabres matched Winnipeg’s speed and effort, helping to create scoring chances in the offensive end. Connor Hellebuyck made a big save in tight on Wayne Simmonds less than three minutes into the game to keep it scoreless. If Simmonds was able to capitalize after a nice pass from Jeff Skinner in the slot, not only would Buffalo have had momentum, but a 1-0 lead. Instead, the game stayed scoreless thanks to strong play in net.

After a few saves at one end, the Jets started to use their speed to their advantage. Blake Wheeler won a race to a puck along the corner in the Sabres zone and fed it to the front of the net where Kyle Connor capitalized. It was a nice play by a team that does not lack for offense.

Just about two and a half minutes later, the lead would extend to 2-0 in favor of Winnipeg thanks to the special teams.

Buffalo had a pair of power plays in the opening period but failed to score on either one. They had good, sustained zone time when Jack Roslovic was in the box for hooking. Tucker Poolman was able to get to the front of the Sabres net while shorthanded and re-direct Connor’s pass to the front of the net for the second Winnipeg goal of the game. The second Sabres power play did not show the same energy as the first, and eventually yielded a goal against.

Connor collected his second goal of the game and third point overall less than four minutes into the middle frame. His 35th goal of the season came just 29 seconds into a power play chance that ballooned the Jets lead to 3-0. However, the Sabres showed some fight as the period went on. Ristolainen was able to skate with the puck behind the net, and when he came out the other side threw it to the goal. The puck hit off the inside of Hellebuyck’s left pad and into the net to cut Buffalo’s deficit to 3-1.

It felt like the Sabres started to take advantage of Winnipeg as the second period went along. Simmonds and Reinhart swapped lines halfway through the game, and it seemed to spur on Buffalo in the middle period. The final shift of the frame saw Simmonds, Jack Eichel, and Victor Olofsson all get quality scoring chances before the break. The Jets outshot Buffalo 14-8 in the second period, but I’m not sure it is a good indicator of how the period went. Much of that advantage was aided by a trio of power plays in the frame.

Buffalo did not back down to start the third period, but it just did not result in a goal that could cut the deficit to one. Again, the top line had chances as they started the period on the ice, but failed to get the puck past Hellebuyck. The blue and gold recorded seven shots on goal in the third for a total of 26 in the game.

Neither team had a special team chance in the final frame.

I thought Buffalo had their moments, like in all three periods, but again failed to beat the Winnipeg netminder in the defeat. After a practice on Wednesday, Buffalo is right back at it on Thursday night when they welcome the Pittsburgh Penguins to KeyBank Center.