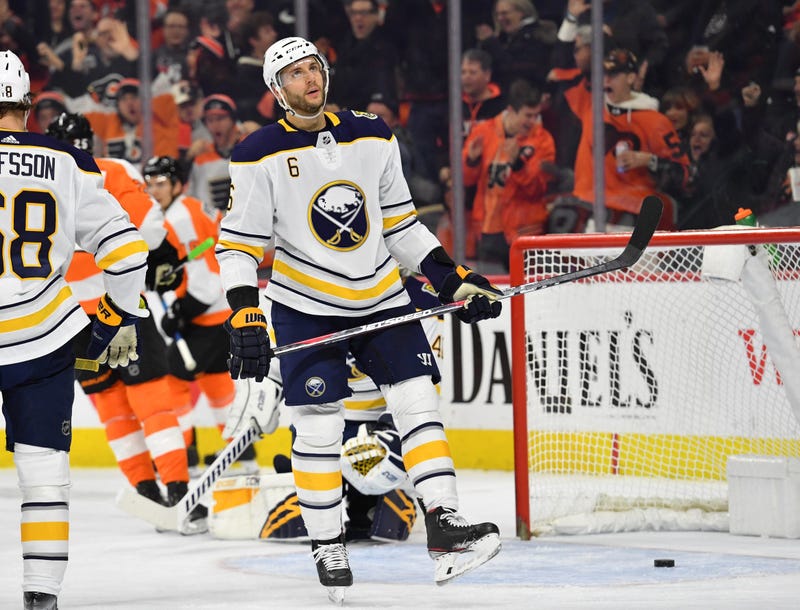 (WGR 550) - Jack Eichel took part in the morning skate on Thursday and in warmups against the Flyers, but became a late scratch with what the Sabres called an upper-body injury, breaking his 17-game point streak. Eichel wasn’t able to play in the game, while Johan Larsson and Evan Rodrigues both went out injured and didn’t return.

Ralph Krueger said on MSG during the postgame that he’ll fill people in Friday after Eichel has been assessed. He made it sound like it was something that happened in the warmup.

I don’t want to overreact because the team played well for 12 games, picking up 16 out of 24 points. It got them to second place in the Atlantic Division, but the Sabres played two very bad periods in Toronto and came back with three goals in the third and almost pulled it out.

The team didn’t seem to react well to their leader and captain being out, getting run out of Philadelphia, 6-1. In the first 10 minutes, the Sabres didn’t allow much, but they absolutely fell to pieces after that with their captain not playing.

When your best player goes down, it’s up to others to step up. The team didn’t pay Jeff Skinner for the next eight years to play like he has recently. Where was Skinner to pick up the slack? Where was Sam Reinhart? Where was Rasmus Ristolainen? Where was Marcus Johansson? These are guys that are supposed to be leaders along with Eichel, and for this game, they were no-shows when their team needed them the most.

Carter Hutton has now lost 10 straight games, giving up six goals, but four of them went in off his teammates or other players.

Rasmus Dahlin was on the Sabres broadcast and called the Sabres' effort soft. I couldn’t agree more.

I did like the Victor Olofsson power play goal in the third period. He went to the net and got a tip. Dahlin got an assist on the goal, giving him points in four straight games.

The Sabres get an opportunity to break their three-game losing streak on Saturday afternoon against Los Angeles.