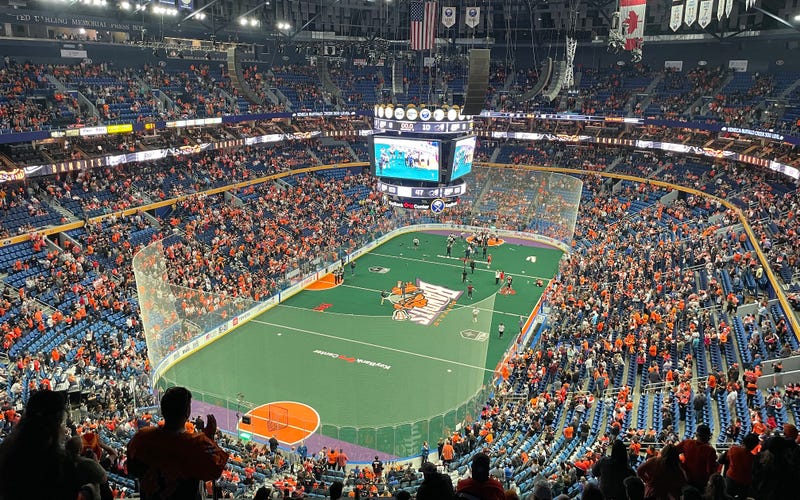 Buffalo N.Y. (WGR 550) - In the Buffalo Bandits' quest for a fifth indoor lacrosse league championship in franchise history, and first title in 14 years, their effort on Saturday night had them coming just short.

The Colorado Mammoth shut down the high-flying Buffalo offense in the second half, earning a 10-8 victory in a do-or-die Game 3 of the NLL Finals at KeyBank Center. The title for Colorado is the second in their franchise's history, and their first since 2006 when they beat the Bandits in similar fashion in Buffalo.

An absolutely incredible ride this season.

Thank you Banditland for your support through it all. pic.twitter.com/dfxFZQ516Q

It was a quick start for the Mammoth, who won the opening faceoff and scored the game's first goal 23 seconds into the first quarter. Irving, New York native Zed Williams got Colorado on the board before the fans even made their way into their seats.

Buffalo was quick to respond, however, as Dhane Smith got the Bandits on the board 52 seconds later, tying the game at 1-1. The Bandits didn't stop there, though, as a pair of goals in quick succession from Josh Byrne and Ian McKay gave Buffalo a 3-1 lead.

Williams halted the Bandits' run of three unanswered goals, as he found the back of the net for the Mammoth's second goal of the game 10:01 into the first quarter to bring the Buffalo lead back to 3-2.

As the second quarter got underway, it was, again, the Mammoth who struck fast and early. Forwards Brett McIntyre and Sam Firth scored a pair of goals 36 and 49 seconds into the quarter, respectively, to give Colorado a 4-3 lead.

Kyle Buchanan answered for the Bandits, scoring a goal 2:05 into the quarter to bring the game back to even. However, the Mammoth put up the pressure, answering 1:15 later off of a goal from Dylan Kinnear to give Colorado their third lead of the night, 5-4.

Buchanan found twine for the second time 7:25 into the second quarter, but the Mammoth responded yet again with a pair of goals from Tyson Gibson and Anthony Joaquim to go up 7-5 heading into halftime.

After a first half filled with goals, things calmed down for a bit, as both goaltenders put on a display, stopping everything in sight.

Scoring resumed again 10:44 into the third quarter, as a timely Mammoth holding penalty sent the Bandits to the power play. Chris Cloutier capitalized on the man advantage to find the back of the net and bring Buffalo back to within one. The third quarter ended with Mammoth still leading, 7-6.

The fourth and final quarter got off to an electric start, as it was the Bandits scoring early this time around. Smith found Connor Fields for a beautiful back door goal just 27 into the quarter, tying the game at 7-7.

The Mammoth were able to answer, however, as Williams scored his third goal of the night on a lazar beam shot from the middle of the Colorado offensive zone, putting the Mammoth back in the drivers seat, up 8-7. Chris Wardle added on another goal for the Mammoth 2:17 later, giving Colorado their two-goal lead back again.

A cross-checking penalty by John Lintz gave the Bandits a power play opportunity with 8:16 left in the quarter, but unlike their first power play of the night, were unsuccessful in doing anything with it.

With time running out and their backs against the wall, the Bandits tried a last-ditch effort by pulling goaltender Matt Vinc for the extra attacker.

However, Williams effectively iced the game by scoring into an empty-net for his fourth of the game, putting Colorado up 10-7.

Buffalo scored one last time before time expired, as Buchanan completed his hat-trick, but with 6.6 seconds remaining on the clock, it was a classic case of too little, too late.

The final from Banditland. 💔 pic.twitter.com/6zU36rKUvL

Mammoth goaltender Dylan Ward was awarded the honor of NLL Finals MVP. The 31-year-old started in all three games for the Mammoth, stopping 150 shots in total, including 55 in Game 3.

As for the Bandits, the only thing they could do was sit and watch the celebrations.