The Buffalo Bills beat the New England Patriots for the first time in Orchard Park since 2011 and, in the process, moved to 6-2 and dropped the defending AFC East champions to 2-5.

Here are the Arrows, starting Up after the win:

Finally. The Bills' running game got in gear to the tune of 190 yards rushing, averaging 5.0 yards per-carry.

Singletary did what he does best, and then some. He made people miss to gain extra yards, but also showed some power and straight-ahead banging for important yards, finishing the game as the Bills' leading rusher with an impressive 6.1 yards per-carry average, totaling 86 yards on 14 carries. He added a six-yard reception for a 92-yard afternoon.

We saw signs of it last week, but the Bills rookie running back hit the hole hard and was a big reason why the running game had such a big day. Moss started both halves by capping off the Bills’ first drive with a touchdown. He finished with 81 yards on 14 carries - a 5.8-yard average - and the two touchdowns.

What a difference it made having Feliciano on the field. The stats showed it in the run game, but the attitude and toughness he brought was also evident as the Bills were running the ball physically. On top of that, Feliciano had to move from guard to center just two series into the game after center Mitch Morse left with a concussion. Feliciano played center, at times, last season, but hadn’t even been on the field in any capacity this season since this was his first game since coming off Injured Reserve. After the game, head coach Sean McDermott said they planned on Feliciano being on a pitch count coming off the injury, but suddenly he found himself having to change roles and playing every snap, and did a great job of it.

It went a bit unnoticed because of the run game being the big part of the win, but Diggs was important and made big plays. Josh Allen only completed 11 passes. Six of them were to Diggs, who gained 92 yards on those receptions, including a huge 41-yard gain to set up their second touchdown.

The Patriots were inside the Bills' 20-yard line three different times, but only scored one touchdown, going 1-for-3 (33%).

Bass didn’t do anything special, but he made all four of his kicks on a windy day. One of which the Bills needed every single one of those points. His 28-yard field goal with 4:06 left in the contest proved to be the game-winner. He also did a good job to put the ball right where he wanted on kickoffs, whether it was into or through the end zone for a touchback, or a shorter kick allowing the coverage unit to do their job.

Just when it looked like the Patriots were not only going to tie the football game but possibly even win it on the final drive, Zimmer, who’s been up and down from the practice squad this season, intentionally punched the ball from Patriots quarterback Cam Newton‘s grasp, causing a fumble and ultimate recovery by the Bills with only 31 seconds left in the game, sealing the victory.

Of course Marlowe makes this list, in part, because of his recovery of Zimmer‘s punch-out. He was Johnny-on-the-spot, hustling to the ball and being in the right place at the right time, then falling on it perfectly without hesitation or issue. He also played a huge role for the Bills in the game, having to fill in for Micah Hyde, who was out with a concussion. Marlowe has been with Sean McDermott for five straight years, going back to his Carolina Panthers days. It showed that he knew exactly how to disguise coverages, play within the framework of the defense, and do his job. He finished with six tackles, one for a loss, and the fumble recovery.

What a huge play Matakevich made to grab the ball before the Patriots could get to it, and it gave the Bills a short field and led to a touchdown. It’s so easy and a natural reaction for a player on the front line of the return team to peel back and start running as the kicker approaches the ball, to get ready for their block. But Matakevich stayed put, kept his head and eyes on the ball, and was ready for it. Good coaching. Great play.

Not a bad day for penalties for the Bills overall.  They had only five for 30 yards.

As good as the Bills running game was on offense, it was equally as bad on defense, almost precisely equally. The Patriots ran the ball 34 times for 188 yards, a 5.5 yard per-carry average.

Klein’s lack of athleticism has shown up every week, and it did again Sunday, as he got beat on several runs to the edge and also in coverage. He also missed multiple tackles when he was in position. The Bills have injury issues at linebacker right now and are searching for answers. Klein isn’t helping to provide them in a positive way. Klein finished with three total tackles.

It’s tough to put a player on here who’s never played a snap for the defense until this game, but Smith was out of position on more than one occasion and didn’t show that he’s the answer to their linebacker issues, either.  He finished with two total tackles.

Bojorquez has had a terrific season, but Sunday wasn’t a good day for him. The wind was challenging, but of Bojorquez’s three punts, two were with the wind at his back. One of those only went 36 yards and the other only 40 yards. He finished the game with a net average of only 35.7 yards, and nothing inside the Patriots’ 20-yard line.

Second half third down defense

The Patriots went 0-for-4 on third downs in the first half. The Bills did good job, but everything changed in the second half. New England converted five of their six chances, finishing the game 5-for-10 (50%) overall.

With 4:16 left in the game and the score tied 21-21, the Bills had a chance to regain a touchdown lead. On third down, Allen fired a pass into the end zone to Davis, but it went right through the rookie’s hands. Davis should have come up with it, which would have forced the Patriots to need a touchdown to tie the game, and maybe just little less angst amongst Bills fans on their final drive.

The Patriots had five plays of at least 18 yards, but three of them occurred in the fourth quarter when they needed them most, including two long runs and a pass. The Bills needed more critical stops to not let the game come down to the final drive.

Understanding that the Bills only threw the ball a total of 18 times, the running game was carrying the day, and it wasn’t the greatest of weather days, Brown and Beasley still only accounted for a total of three targets. Considering how thin the Patriots were in the secondary, it seemed like there should be some good opportunities to go to two of their top-three wideouts, but it didn’t happen.

End of first half sequence

The Bills were leading 7-3 and driving late in the first half. They had started at their own 22-yard line and drove down the field to give themselves a 2nd-and-3 at the Patriots' 36-yard line at the two-minute warning. They were in a great position to get points before halftime, then get the ball back to start the send half. The double-dip.

But then they imploded.

Offensive guard Brian Winters was called or a hold, knocking the line of scrimmage back to the 46-yard line. Then on 2nd-and-13, Allen hit Diggs for a short five-yard gain. But on 3rd-and-8, the two had a miscommunication, leading to an interception and the Patriots taking the ball back to the Bills' side of the field, ultimately leading to a field goal of their own. It was at least a six-point swing.

The Bills had just re-taken the lead on an Allen touchdown run to make it 21-14 less than two minutes into the fourth quarter. The defense had a chance to take over the game and give the ball back to the offense with the lead. Instead, the Patriots went right down the field on them. It took only seven plays to go 72 yards and score a touchdown of their own. The first five plays of that drive went for 22, 9, 13, 18, an 7 yards to set New England up with a first-and-goal. It was just way too easy.

There was a lot of hype surrounding this game, especially for what it meant to Bills fans both for the shot-term standings and long-term big-picture of the two organizations.

It was a chance to bury the demons of the Patriots' past, and finally move forward with the last two decades of dominance in the rear view mirror. And with the Patriots down so many players due to opt-outs and injuries, many fans thought this was simply going to be a coronation of the new kings of the AFC East, and an easy one at that.

But it wasn’t, and we should all know better. It’s the National Football League. It wasn’t easy and it wasn’t perfect, but it was a win.

The Bills do have a firm control on the division right now, leading the second place Miami Dolphins by, essentially, two full games (one and a half in the standings plus already beating them head-to-head). They now have, essentially, a four game lead on the Patriots (three and a half in the standing, plus a head to head win). The Bills have a 4-0 record in the division for the first time since 1991.

Look around the league at what happened this weekend:

- The Titans lost to the Bengals
- The Packers lost the Vikings
- The Rams lost to a quarterback making his NFL debut, who didn’t even throw for 100 yards.

The Bills won. They beat the Patriots in an important game for both teams. It wasn’t perfect, nor how many wanted to see it happen, but no matter how it happened, what the final score was, or what it felt like, the Bills are right where they want to be - in first place in there own division halfway through their season.

Here’s a look at the current AFC East standings and conference seedings: 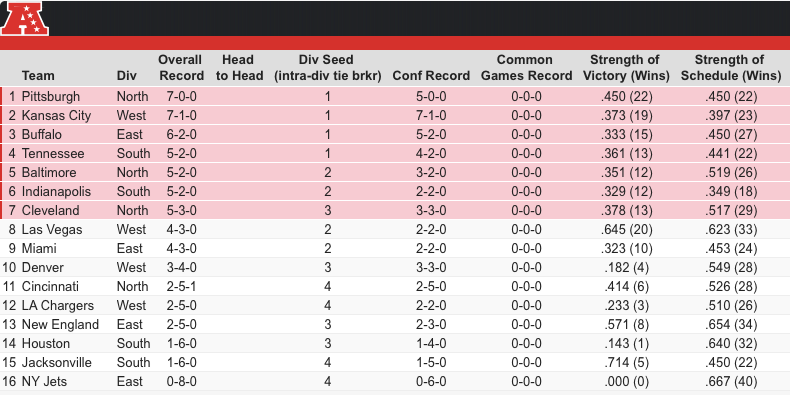