The Buffalo Bills will try to get to bounce back from their first loss of the season when they take on the defending Super Bowl champion Kansas City Chiefs on Monday afternoon at Bills Stadium in Orchard Park.

The Chiefs will be looking to do the same as both teams enter Monday's contest with a 4-1 record.

Here are four keys to the game, plus notes and stats:

The Bills need to put Tuesday night’s loss to the Tennessee Titans behind them as quickly as possible, and hopefully they already did that at practice and in meetings throughout this week.

There were a lot of schedule changes last week, including at one point not even knowing when their next game was, or even who the opponent would be, and then playing a team that was making headlines for two weeks for a COVID-19 outbreak in its organization.

No one used those as excuses after the game, but it was clear the team wasn’t as focused, or as disciplined. You hope the lesson was learned that no matter what the circumstances, you still have to be as prepared and ready as possible.

This week brings some scheduling changes and challenges, as well, and the Chiefs are coming off their own disappointing loss.

However, the Bills have also struggled to get teams off the field on third down, allowing a third-worst 50.88% conversion rate. The Chiefs are better, but middle-of-the-pack on defensive third downs, allowing 42.62%, which is 15th in the NFL.

Whichever team can get an extra critical stop or two might have the chance to get that extra score that leads to a win.

Both of these offenses thrive on the big play.

The Chiefs will be without wide receiver Sammy Watkins, but they still have tons of firepower all over the field and can strike from anywhere.

The Bills really missed the presence of wideout John Brown last week and couldn’t get their downfield passing game going. He’s questionable to play in this game and whether he does or not could have a huge impact on their ability to attack down the field the way they had through the first four games of the season.

The Las Vegas Raiders pulled the upset over the Chiefs last week by getting to quarterback Patrick Mahomes with their front-four on defense, allowing their secondary to blanket the field. They sacked him three times overall, but Mahomes often had to scramble and make plays outside the pocket. He’s good at that, but doing that also takes away some of the field he wants to read.

The Bills haven’t been able to generate much of a pass rush this season (they’re 21st in the league in sacks per pass attempt), so if they want to follow this blueprint they’ll have to be find a way to be better at it than they’ve been. 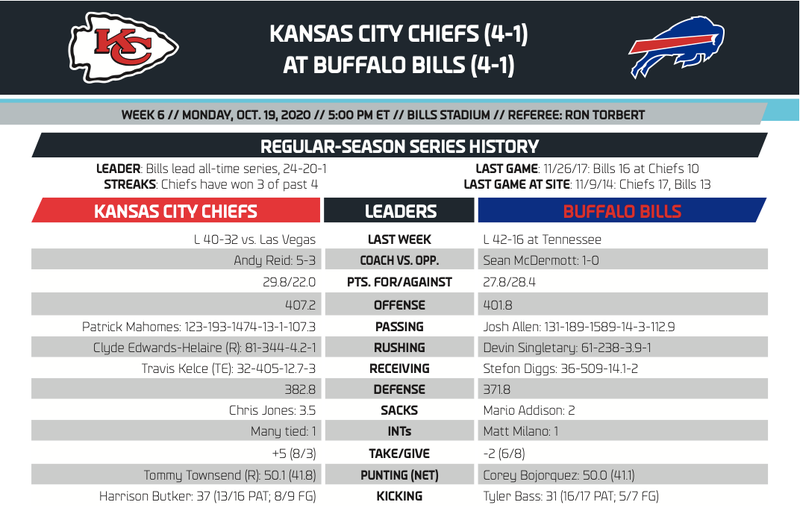 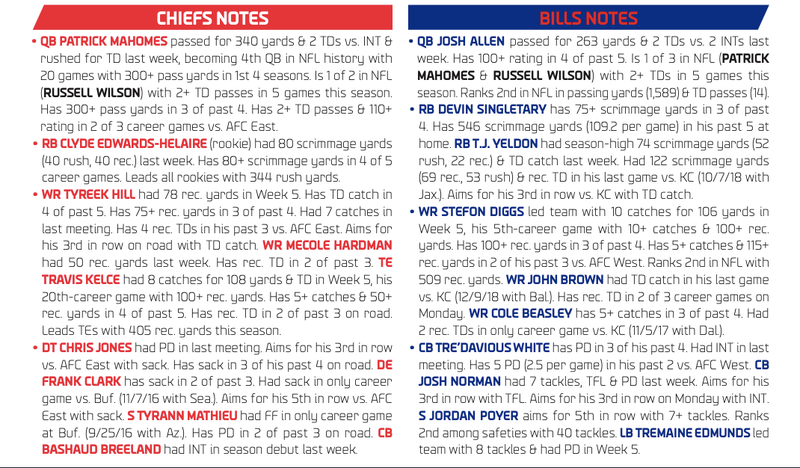