After a 38-6 loss to the Baltimore Ravens in Week 1, it felt like the Cleveland Browns' 2020 season - and probably more - was already on the ropes.

Following an underwhelming first season with the Browns, Odell Beckham Jr. had just three catches for 22 yards in the Week 1 loss, leaving you with the feeling that it was only a matter of time before we seriously began discussing what team should trade for the three-time Pro Bowler.

A year after leading the AFC with 21 interceptions, Baker Mayfield threw a pick and was largely ineffective in the season-opening loss, giving you the sense that things may be trending towards the Browns not picking up his fifth-year option after the season.

But if 2020 has shown anything, it's that our perspectives can be entirely changed in the matter of just a few weeks.

Since losing in Week 1, the Browns are 3-0 and first-year head coach Kevin Stefanski appears to have tapped into the offense's elite talent.

Beckham had three touchdowns in a Week 4 shootout win in Dallas. Stefanski has found a way to get one of the league's weapons involved in both the passing and running game, as the Browns sealed their victory over the Cowboys on a 50-yard touchdown run by Beckham.

Since Week 1, the Browns have gotten Mayfield out of the pocket, and he's thrived. In the team's three consecutive wins, Mayfield has tossed six touchdowns to just one interception.

The wisest thing Stefanski has done since Week 1, though, is build his offense around an elite running game. Despite missing much of the team's Week 4 victory, Nick Chubb is currently third in the NFL in rushing yards. Kareem Hunt is 10th, and has added two receiving touchdowns for good measure. The Browns have the No. 1 ranked rushing offense in the NFL, as they're currently averaging 204.5 rushing yards per game.

Are the Browns the best team in the AFC North? Probably not. Heck, in a division that includes the Baltimore Ravens and Pittsburgh Steelers, they may not be the second best. However, after three straight wins, they have skyrocketed into the top 10 of our latest RADIO.COM Sports NFL Power Rankings: 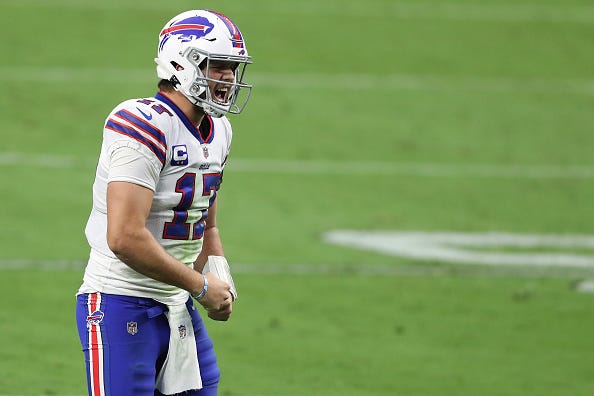 Early on, Josh Allen is an MVP candidate

Russell Wilson is the early MVP favorite, but Patrick Mahomes and Aaron Rodgers are joined by Bills quarterback Josh Allen in the next group of candidates after the first quarter of the 2020 season. In Allen's first two seasons, Sean McDermott's team tried to win games 20-17, as evidenced by the fact that they scored 30 or more points just twice the entire 2019 season. After acquiring Stefon Diggs this past offseason, Brian Daboll has opened up his offense and Allen has taken a major step forward. The Bills are 4-0, and have already scored 30 or more points in three games. Allen isn't a finished product, as he still needs to learn when to live to see another play. But through four weeks, he's tossed 12 touchdowns and only been picked off once. He's ran for another three touchdowns as well. In his third season, Allen's production may finally be catching up with his ridiculously high physical talent. That's scary for the rest of the league. 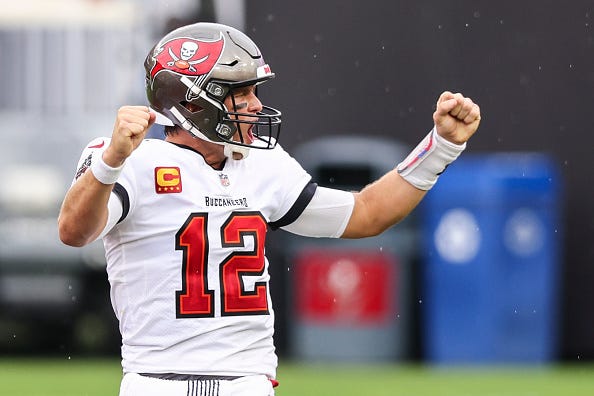 For a minute, it looked like the Tampa Bay Buccaneers were going to be upset by Justin Herbert and the Los Angeles Chargers at home in Week 4. However, Tom Brady and Mike Evans combined to help overcome a 24-7 deficit, as the Buccaneers ultimately won a shootout, 38-31. Even as he still feels his way out in Bruce Arians' offense, Brady tossed five touchdowns and racked up 369 yards in Week 4. Evans, clearly limited by an ankle injury, still had seven catches for 122 yards. If this offense truly is just scratching its surface, it's crazy to think about how good they could be in December. 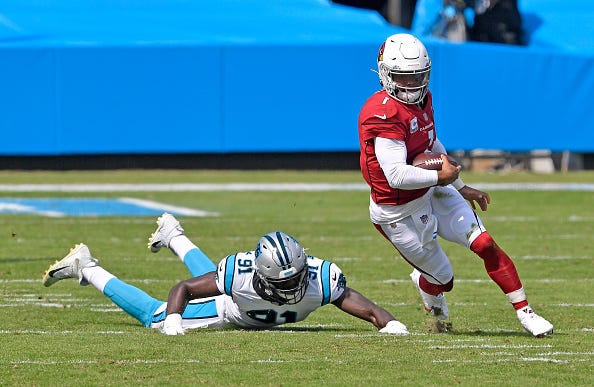 Kyler Murray and the Cardinals started out 2-0, but have since lost two consecutive games, a concerning trend when they play in a division where there aren't any teams with a losing record after four weeks. The scariest part of the Cardinals' two consecutive losses is that they've been to the Detroit Lions and Carolina Panthers, two teams seemingly not headed towards a playoff appearance. After averaging 6.1 yards-per-carry in eight games with the Cardinals last season, Kenyan Drake is averaging four yards per carry in 2020. Getting him going should be a priority in a what should be an automatic win against the New York Jets in Week 5. 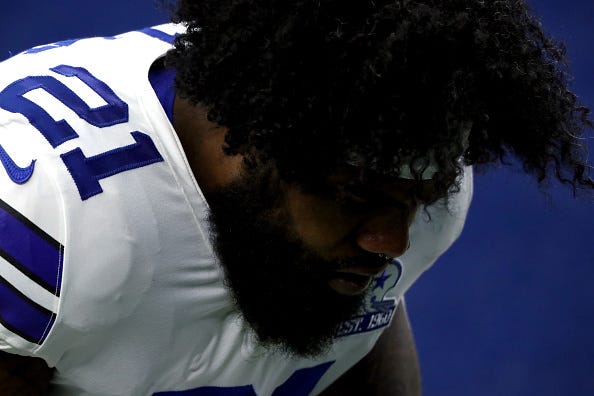 Cowboys Off to Frustrating 1–3 Start

The most passing yards a quarterback has thrown for in one season is the 5,477 that Peyton Manning racked up with the Denver Broncos in 2013. Through the first quarter of the 2020 season, Dak Prescott has thrown for 1,690, putting him on pace for 6,760 over the course of the 16-game slate. And the Cowboys are 1-3. Instead of discussing Prescott as an NFL MVP candidate, we're left to wonder if the Cowboys, who have given up an average of 42 points over the last three weeks, have the worst defense in the sport. Also of concern is that Ezekiel Elliott is averaging just 3.9 yards per carry, behind an offensive line that's a shell of its former self. The guess here is that the Cowboys will still ultimately win the NFC East, though that has more to do with the dire state of the division than belief in Mike McCarthy's coaching staff. 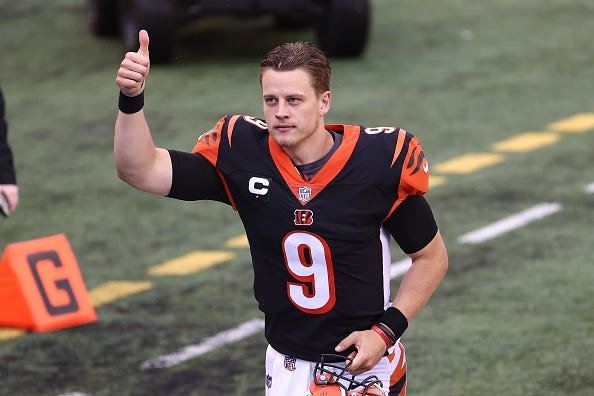 Joe Burrow and the Bengals got their first win in Week 4. Photo credit (Andy Lyons/Getty Images)

Don't look now, but over the last two weeks, Joe Burrow and the Cincinnati Bengals are 1-0-1. That's after an 0-2 start where they lost to the Los Angeles Chargers and Cleveland Browns by just eight combined points. The Bengals are probably in for a rough stretch over their next three games, as they'll see the Baltimore Ravens, Indianapolis Colts and a vastly improved Browns team. The Bengals aren't going to compete for a playoff spot in 2020, especially considering the three other teams in the AFC North are in the top 10 this week. However, they're vastly improved over where they were at this time a year ago, a pretty good indication of how the Burrow era will go. 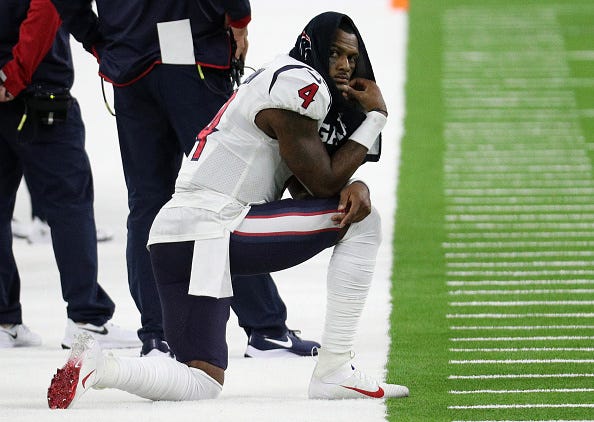 Where do the Texans go from here?

Bill O'Brien is gone, but with the exception of leaving behind Deshaun Watson, there appears to be a pretty bleak immediate future in Houston. Not only are the Texans winless through the first quarter of the 2020 season, but because of the DeAndre Hopkins and Laremy Tunsil trades, Houston isn't currently slated to have picks in the first, second and fourth rounds in the 2021 NFL Draft. We looked at five potential candidates for the coaching job at the conclusion of the 2020 season, but right now, this isn't exactly an attractive job.