San Francisco 49ers cornerback Richard Sherman has played against Josh Allen once in his career, but it only took that one game to give the future Hall of Famer a taste for what he could do.

The Buffalo Bills quarterback shredded the 49ers defense for 375 yards and four touchdowns without any interceptions and only eight incompletions in a 34-24 win in Week 13. Sherman spoke highly of the third-year gunslinger after the impressive performance.

"He made some plays, you've got to give him credit," Sherman said back in early December. "He was in good control of the game, he didn't pass up any easy looks, he didn't take any risky throws. The [defensive] line was doing everything they could and putting a lot of pressure on him, but he did a great job of evading and extending plays. You extend plays for four or five seconds, then the coverage usually breaks down regardless of what you're in.

"You've got to give him credit, man. He played a freaking fantastic game."

And though he didn't compare Allen's performance to any other quaterbacks in the league, that same type of ability to extend plays caught his eye on Wild Card weekend, when Allen led the Bills to a win over the Indianapolis Colts. This led Sherman to make an intriguing comparison.

Sherman explained who Allen reminded him of most, and why, on the latest episode of "The Cris Collinsworth Podcast."

"It's not going to be the initial play that kills you. It's going to be the secondary scramble... and I think that's the factor that you can't account for," Sherman said. "And at least when we played him, we had him. We had their plays buttoned up... and they ended up being explosive plays because he casually extended the play. He didn't panic, he didn't say 'hey, I'm gonna scram, I'm gonna run.' He said, 'hey, this is my outlet, I'm going to move and create three more seconds for this guy...'

"It's Aaron [Rodgers]. And the fact that when he extends it I have to be super cognizant."

Sherman used an example of a play in which Allen had two reads — one 40-some yards out and one 70 yards downfield — and that his ability to use his arm strength and extend plays makes it so hard for the secondary to account for both.

"That will always be in your mind because not only can he throw it anywhere he wants, he can get it anywhere on the field and that's similar to Aaron. Aaron can throw it 80 yards backside of the field, outside the numbers," Sherman explained. 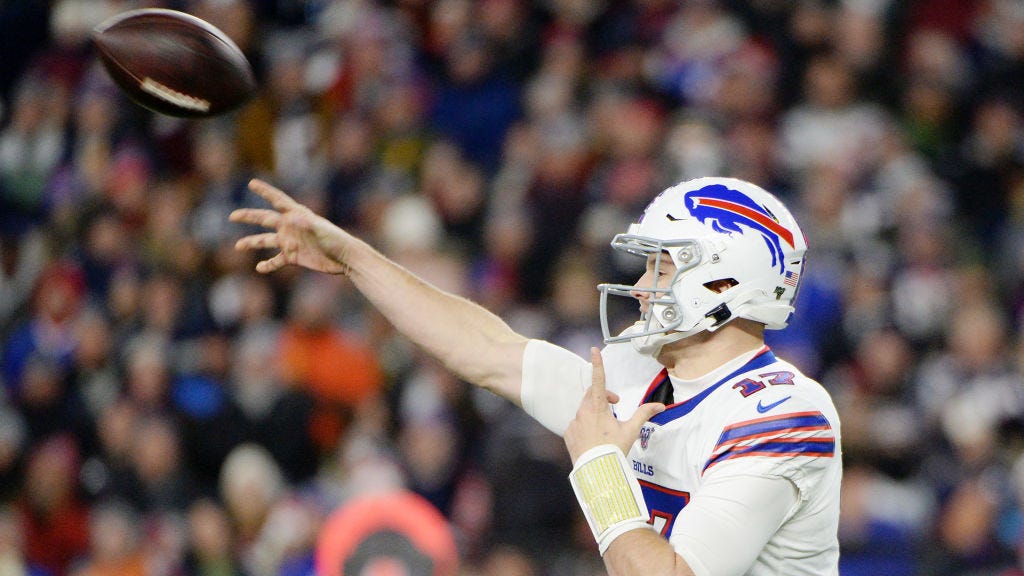 Zack Moss: Josh Allen can throw a football 100-plus yards

Regardless of whose arm is stronger, a comparison to the Aaron Rodgers, who will go down as one of the greatest players the game has ever seen, is never a bad thing to have under your belt. When it comes from someone like Sherman, that's even better.

Now, will Allen throw for over 50,000 yards and 412 touchdowns (and counting) to just 89 interceptions throughout his career like Rodgers? Will he have a historic 48-touchdown, five-interception season at age 37 en route to a likely MVP award like Rodgers?

If that's the case, maybe we shouldn't crown the Kansas City Chiefs as the dynasty team to beat in the AFC so soon.