Green Bay Packers quarterback Aaron Rodgers will almost certainly be the National Football League's Most Valuable Player for the 2020 season, but by leading the Buffalo Bills to six consecutive victories to finish the year, Josh Allen may threaten Kansas City Chiefs quarterback Patrick Mahomes for the runner-up in the award.

More importantly, the Bills, who finished the season at 13-3, may be the biggest impediment to the Chiefs in the AFC, and perhaps the entirely NFL. A large part of that is because Allen has exploded in his third NFL season, tossing 37 touchdowns, racking up 4,544 passing yards and adding in 421 rushing yards and eight more touchdowns on the ground.

There appears to be a feeling in the sport that Allen, the No. 7 pick in the 2018 NFL Draft, is here to stay. Though he was pretty raw coming into the NFL, offensive coordinator Brian Daboll and private quarterbacks guru Jordan Palmer appear to have helped Allen reach his ceiling.

Mike Florio of NBC Sports says that some in the NFL now believe that Allen would be the most appealing quarterback to have in the long run, not Mahomes:

"I've talked to very knowledgable people in league circles who quietly will say that if they had to choose between the two right now, they would take Allen for the course of the career, because he's larger and possibly more durable than Patrick Mahomes would be. It remains to be seen how durable both are over the long haul, but that's high praise for Josh Allen because there is a sense by some that Patrick Mahomes is in a class by himself. There are others that think Josh Allen is in that exact same class."

2020 has been a strange season for Mahomes. The Chiefs won 14 of his 15 starts and he threw for 38 touchdowns to just six interceptions, racking up 4,740 passing yards. By all accounts, Mahomes and the Chiefs have lived up to sky-high preseason expectations, and are the favorites to win their second consecutive Super Bowl title.

Still, after Mahomes led the Chiefs to three consecutive comebacks in the postseason last year, it seemed it was fate that he would eventually go down as the greatest quarterback in the history of the sport. Maybe we've become so numb to his greatness, but it does appear that there's been some leveling of the playing field among the sport's elite quarterbacks this season.

Rodgers - seen by many as the most talented quarterback ever before the arrival of Mahomes - added another incredible chapter to his story this year, one that will likely net him his third All-Pro nod, among other honors. Rodgers, of course, hasn't had the benefit of working under a coach like Andy Reid in his career, nor has he been blessed by the consistently great weaponry at Mahomes' disposal. Tom Brady may always be the most accomplished quarterback ever, but if you built quarterbacks in a lab, you'd be more likely to build Mahomes and Rodgers, as opposed to Brady. That will make comparing and contrasting the respective careers of both a fun thing to do.

That said, Rodgers is 37 and Mahomes is 25. When Rodgers was drafted in 2005, Mahomes was just 10-years-old. So while there will be some career overlap, the two aren't exactly peers. 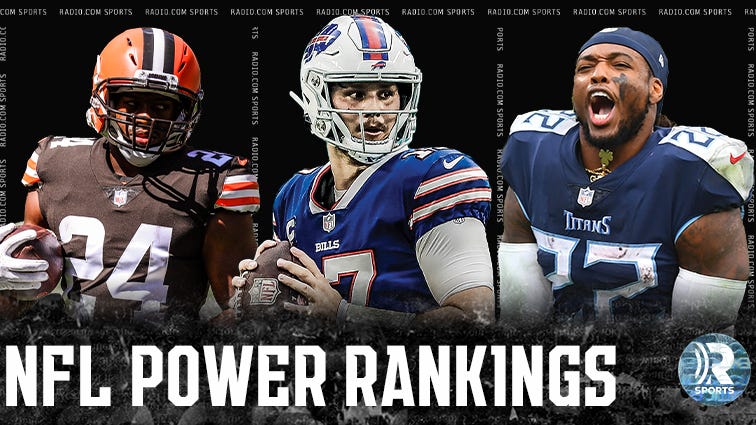 NFL Power Rankings: Who are the postseason favorites?

Mahomes was drafted a year before Allen, but sat behind Alex Smith in his rookie season. Both began playing in 2018, and didn't appear to be in the same zip code in terms of ceiling. In 2018, Mahomes tossed 50 touchdowns and won the NFL MVP. Allen completed just 52.8% of this passes, and threw 10 touchdowns, two less than the 12 interceptions he had during his rookie season.

And yet, here we are two years later. Allen probably has as much arm talent as anyone to ever play in the sport, and his completion rate increased to 69.2% in 2020, higher than any mark that Mahomes has ever finished a season with. Mahomes is mobile, but it's a fairly uncontroversial statement to say that Allen is more of a threat to pull the ball down and run for a touchdown. Both had all-time regular seasons in 2020, but it's possible that for one regular season, Allen was a superior player to Mahomes.

It's far too early to tell if Allen will become a true peer of Mahomes, especially if Daboll departs Buffalo to become a head coach this offseason. In the meantime, though, Allen and Mahomes could meet in the AFC Championship game, and if there's going to be anything like a Brady-Peyton Manning rivalry this era, perhaps it will be between these two.