The Mets and Braves are set for an all-important three-game series in Atlanta this weekend. It's a series that may be impacted by Hurricane Ian moving up the East Coast.

Both teams are off on Thursday and New York holds a one-game lead over Atlanta with just six games remaining. This three-game set will go a long way in determining who wins the NL East.

The NL East winner will get a bye in the Wild Card round while the other team plays a best-of-three series to advance to the NLDS. With how important pitching is in the playoffs, those extra games could be the difference between advancing and going home.

Cody Decker and Tony Gwynn Jr. of the Audacy Original Podcast “Big Time Baseball” discussed this weekend’s Mets vs. Braves series and how important it is for each club.

“I think this is so much more important for the New York Mets to win this division than the Atlanta Braves,” Decker said (10:07 in player above). “The bye – which I still am not sold is necessarily a good thing – would be a very good thing for the Mets because if you have to play a Wild Card Series and you’re going to burn deGrom and Scherzer Game 1 and 2, and you are, you’re going to play the Los Angeles Dodgers without deGrom and Scherzer pitching until Game 3. That’s a problem.”

After that, New York has a few starters they could turn to with Chris Bassitt, Taijuan Walker, and Carlos Carrasco all holding ERAs under 4.

The Braves also have a few top-tier pitchers in Max Fried, Kyle Wright, and rookie Spencer Strider, who is currently on the IL. After that, they have veteran Charlie Morton, who won the World Series in 2017 with the Astros and threw 16 pitches on a broken leg in the Braves’ run to the World Series last year.

“It’s not the ideal situation, if you will,” Gwynn Jr. said of the Mets potentially being forced to pitch their aces in a Wild Card Series. “I think the Braves are probably better – I should say they’re deeper at the starting rotation spot to maybe absorb a Wild Card Series… I agree with that. This is an important series for the Mets. They need this, I think, more than the Braves do.”

The Mets have been known to let division leads slip away and they held a seven-game lead over the Braves as recently as August. They entered September with a three-game cushion. While they’ve guaranteed a playoff berth, blowing the division lead could hurt the Mets psychologically on top of the pitching situation. 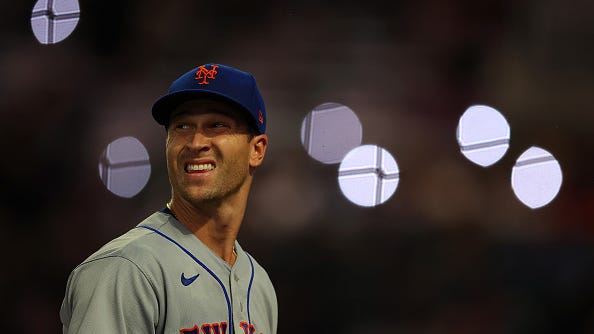 Mets were willing to play in Atlanta Thursday; Braves declined