Buffalo, N.Y. (WGR 550) - The Buffalo Sabres returned to home ice on Wednesday for '90s night against the St. Louis Blues at KeyBank Center.

It was a charged energy in the building with the Sabres unveiling their new take on an old favorite, the black and red "goathead" jerseys for the first time this season.

Sabres forward Jeff Skinner started the game quick for his team for the second game in-a-row, scoring just 18 seconds into the first period.

The rest of the opening 20 minutes remained quiet on the offensive front, even though chances were plentiful on both sides.

The Blues came out firing in the second period when Pavel Buchnevich scored 53 seconds into the period on the power play.

However, the Sabres came back quickly with three goals of their own from Dylan Cozens, Victor Olofsson, and Skinner with his second of the night. Buffalo ended up going into the second intermission with a 4-1 lead.

It took some time for the two teams to find the back of the net in the third.

Blues forward Brayden Schenn wrapped up the scoring for the night with a late goal that made the final 6-2, Buffalo. 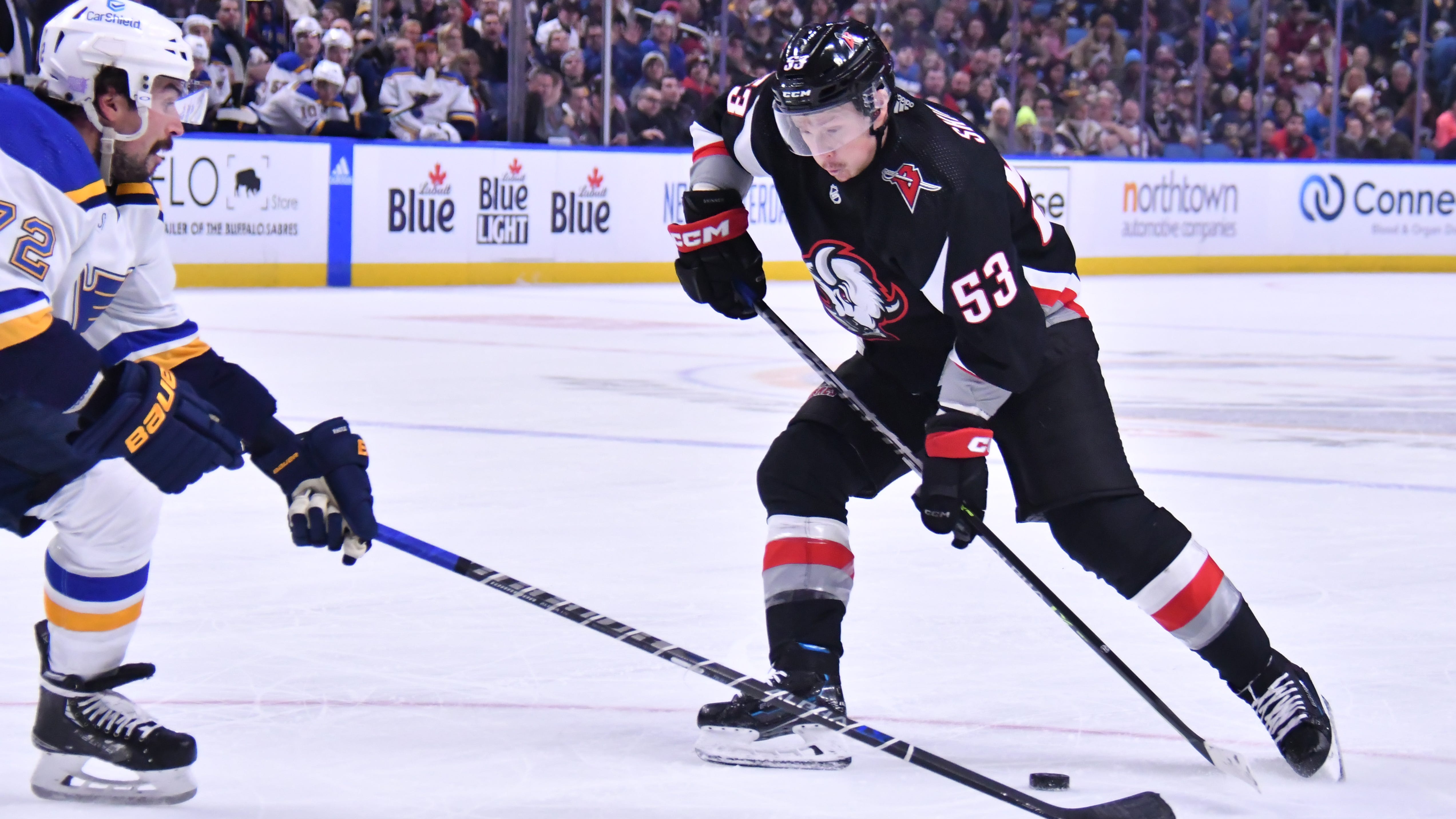 Sabres back in black with win over St. Louis

The Sabres harnessed their power from the '90s in this game, and dominated throughout, winning their second-straight game. 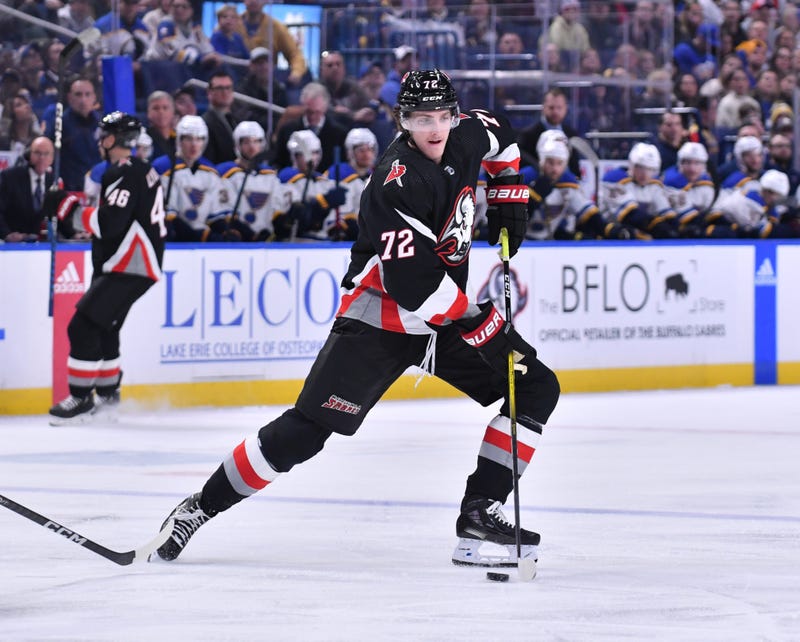 This top line for the Sabres has been on fire all season long, carrying the rest of the team, at times. The playmaking ability of Alex Tuch, stick handling and shot of Tage Thompson, and Skinner's nose for the net make this a deadly trio.

The three have combined for 26 points (11+15) over the past five games. Thompson is in the top-10 in points and the top-five in goal scoring largely, in part, to the success that the line has had.

These three forwards are the main leaders of this young Sabres team, and have done an excellent job doing so this season. They were the main driving force at pulling the team out of their eight-game losing streak. 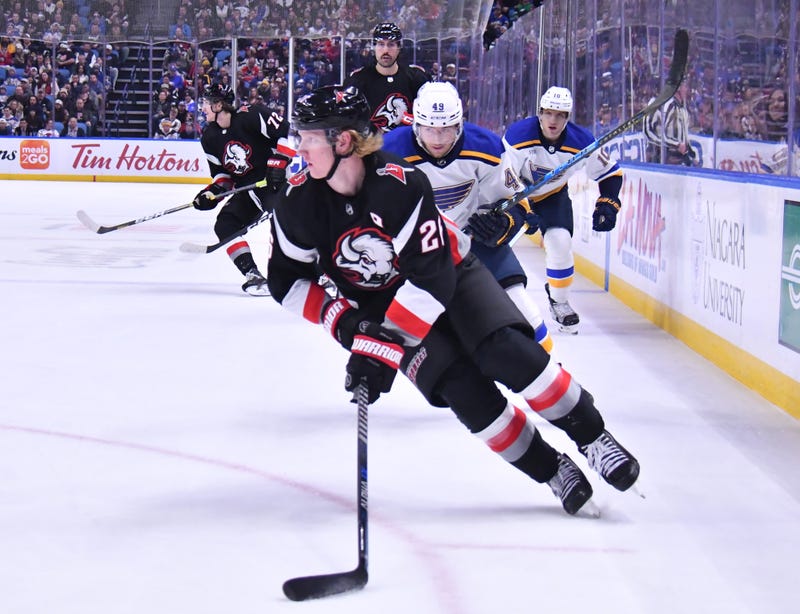 The Sabres defense was one of the glaring issues during the eight-game drought, but it seems the re-entry of Henri Jokiharju and Mattias Samuelsson has really propelled the blue line to a new level.

This is a key aspect of the team's game, given the youth of a goalie like Ukko-Pekka Luukkonen. Luukkonen needs as much help as he can get, as he is still adjusting to the NHL game and can't be rushed into anything he might not be ready for.

The experience and skill of a fully healthy Sabres blue line allows Luukkonen to have, somewhat, of a safety net. It also gives the offense a bit more freedom when pressuring in the offensive zone. 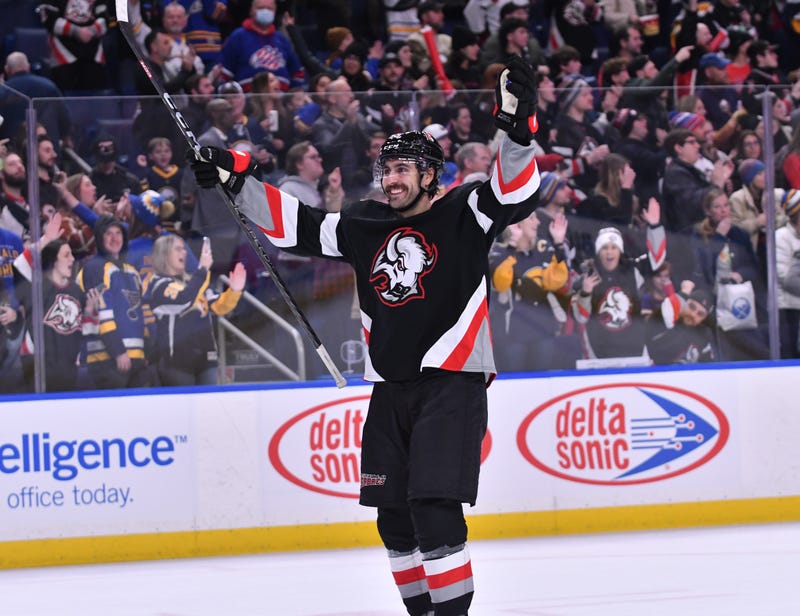 This is the first time Buffalo has won back-to-back games since the beginning of November. The team needs to keep their momentum rolling into Friday when a tough opponent like the New Jersey Devils come to town.

Although the Devils lost Wednesday night to the Toronto Maple Leafs, they were riding a franchise record 13-game winning streak.

One of the key aspects the Sabres need to re-create on Friday is the intensity they brought to the past two games. If they can get the Devils on their heels early, they can keep this momentum moving.

The Sabres will have Thanksgiving off before welcoming the red-hot Devils to town on Friday evening. Faceoff is scheduled for 8 p.m. EST with pregame coverage starting at 7 p.m. EST with Brian Koziol on the radio home of the Sabres - WGR Sports Radio 550.

Photo credit Losi and Gangi
We strive to be a platform where varying opinions may be voiced and heard. The views, thoughts, and opinions expressed by the author(s) of this article and/or by those providing comments are theirs alone, and do not represent those of Audacy, Inc. We are not responsible for any damages or losses arising from this article and/or any comment(s).
Featured Image Photo Credit: Mark Konezny - USA TODAY Sports