The Washington Nationals might not need to make a decision on Juan Soto right this second, but they need to figure out which path they’re going to take with him.

All season long, there has been league-wide speculation that the struggling Nats would at least consider trading their star outfielder, who has rapidly become one of, if not the best hitter in baseball.

The Nationals don’t seem opposed to keeping Soto, but thus far they’ve yet to reach an agreement on a contract extension to keep him in Washington.

Soto was back in the headlines last week when details of a reported contract offer from the Nationals was leaked. The report claimed the Nats offered Soto $425 million, but it was quickly disputed by Nationals reporters. Addressing it on his “Baseball Tonight” podcast, ESPN MLB insider Buster Olney offered some fascinating insight into the situation.

“If you’re Scott Boras, who represents Juan Soto, and you have a client who is 23-years-old and he’s already one of the premier hitters in baseball, you have the ultimate leverage," Olney said. "If whatever Soto’s contract is turns out to be less by a nickel to what Mike Trout got, $430 million, I’d be shocked. Because if you’re Scott Boras, you can just ask for the moon, you can basically say this is the benchmark that we’re going to set for this guy to stay, and I don’t know if incoming ownership is necessarily going to want that.

“And the fact that the information about his negotiations leaked out last week, four weeks before the deadline, that got the attention of a lot of folks with other teams. Because they’re wondering at some point if the Nationals can’t sign him, they’re going to have to put him out on the marketplace the way the Orioles did with Manny Machado.”

That news leaking very well might be a coincidence more so than a sign that they might suddenly be amenable to moving him, especially since it was so quickly knocked down. But this is the type of contract or trade would require big discussions with ownership, and the Nationals might end up getting sold. That current uncertainty could put a halt on a decision either way with Soto, who is under contract through the 2024 campaign 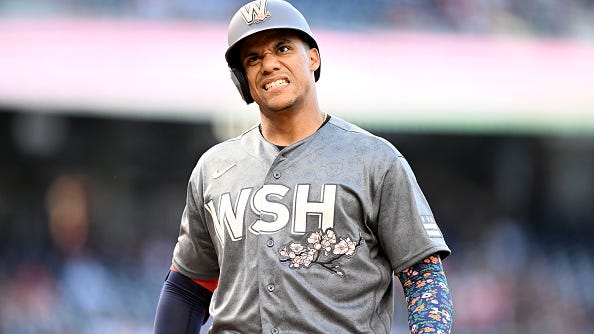