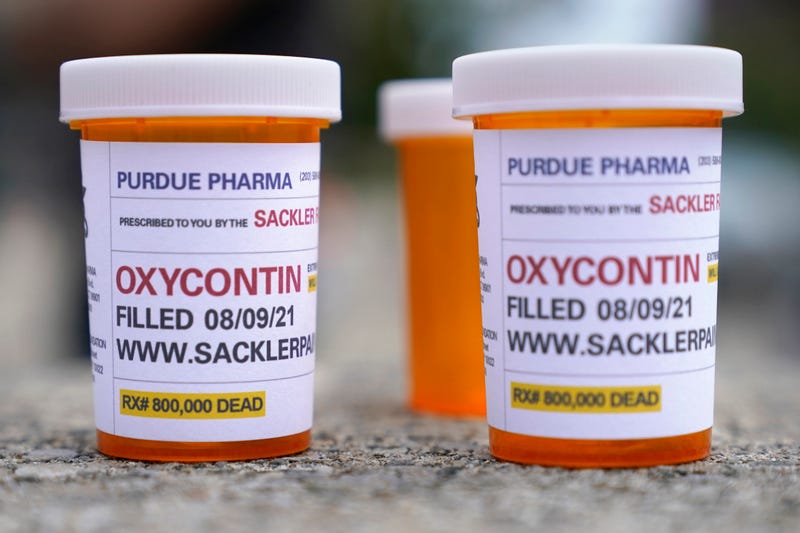 NEW YORK (AP) — A federal judge should reject a sweeping settlement to thousands of lawsuits against OxyContin maker Purdue Pharma, a group of states said at a hearing Tuesday, arguing that the protections it extends to members of the Sackler family who own the firm are improper.

States have credible claims that family members took more than $10 billion from the company, steered it toward bankruptcy, and then used a settlement crafted in bankruptcy court to gain legal protections for themselves, Washington state Solicitor General Noah Purcell told U.S. District Judge Colleen McMahon.

“If that is not an abuse of the bankruptcy process,” Purcell said, “it’s unclear what would be.”

The plan, crafted largely by those with claims against Purdue and approved in September by a federal bankruptcy judge, calls for members of the Sackler family to contribute more than $4 billion in cash, plus the company itself, to fight the opioid epidemic, which has been linked to more than 500,000 U.S. deaths in the past two decades, including deaths linked both to prescription and illicit drugs.

In exchange, members of the family are to be protected from lawsuits accusing them of spurring the crisis. The suits accuse the company and family members of helping to spark the overdose crisis by aggressively marketing OxyContin, a powerful opioid painkiller.

They would not be protected from criminal charges. They're not facing any now, though a group of activists has been pushing federal authorities to bring charges against some members of the family, which includes some people who were executives and board members at the company and others with no involvement other than receiving money from it. Much of their fortunes are held in offshore trusts that could be hard to access in U.S. lawsuits.

Most state and local governments and thousands of individual victims of the epidemic agreed to the deal, though many did so grudgingly. Those groups are now joining with Purdue and Sackler family members to defend the plan from appeals from an office of U.S. Department of Justice, eight states, the District of Columbia, some Canadian local governments and Native American tribal groups, plus some individual victims.

In the hearing Tuesday in a New York City courtroom, McMahon focused on the $10.4 billion in transfers from Purdue coffers to family trusts from 2008 to 2018. Nearly half of that was used to pay taxes on the earnings.

The judge said that by taking bigger distributions over the decade leading to the company’s bankruptcy filings, Sackler family members “made themselves necessary" to the negotiations over how much money would be available for claimants.

Lawyers for the family said that distributions were bigger because the company was making more money and that there's no evidence any of them were trying to manipulating the bankruptcy system.

Those appealing the plan contended that the protections the Sacklers got are more generous than what they could have received had they filed for bankruptcy themselves. Bankruptcy would also protect the company from lawsuits.

They also said that allowing the deal would usurp states’ ability to sue Sackler family members to hold them accountable.

“What confirmation of this plan does in this case is strip the states of police powers,” Maryland Assistant Attorney General Brian Edmunds said, “to protect the public from harm.”

Marshall Huebner, a lawyer for Stamford, Connecticut-based Purdue, said the states were misstating some details of the settlement plans, including how U.S. Bankruptcy Judge Robert Drain insisted that Sackler family members would receive protections from lawsuits involving only opioids made by Purdue.

He also noted that the overwhelming majority of governments agreed to the plan, which would funnel money to individual victims of the opioid crisis and to efforts to fight the crisis.

McMahon cut him off. “My questions focus on aspects of legality of the releases,” she said. “I don’t want to hear about the wonderful things it’s going to do. I know it was approved by a supermajority.”

Still, Huebner noted, there would be far less money to work on the crisis without money from Sackler family members. He said that if they could be sued and prevailed, they might not pay the settlement. And if they lost other lawsuits — they now face about 860 of them — they might not be able to afford to.

Kenneth Eckstein, a lawyer for a group of government entities supporting the settlement, said they also wanted the releases for Sackler family members.

If some states could sue the family, he said, the others would not accept a payment plan that stretches over nine years because of a risk that the Sacklers’ money would dry up before the installments could all be paid.

Mitchell Hurley, a lawyer for unsecured creditors who were seeking pieces of Purdue’s assets, said that if most of those groups had not joined to agree to a settlement, “the value of Purdue was going to be wasted and go to lawyers” rather than addressing the opioid crisis.

He noted that the government and private creditors — except the individual victims — have agreed to use all the money they receive to fight opioids, which are claiming 200 lives a day in the U.S. And that money, he said, could start flowing soon if it's allowed.

“If it fails, if it blows up,” Hurley told McMahon, “it’s going to be the creditors who uniquely suffer the consequences.”

But Maria Ecke, who lost her son Jonathan in 2015 to an addiction that began 17 years earlier when he was prescribed opioids after being injured in a car crash, said the settlement hurts.

The Connecticut resident on Tuesday showed McMahon a poster of photos of her son and pleaded that the settlement not be allowed.

“The plaintiffs have suffered and continue to suffer physical and mental injuries,” she said.

McMahon has said she hopes to rule by next week, though a decision could take longer. Hers almost certainly won’t be the last word; whatever decision she reaches is likely to be appealed to a higher court.