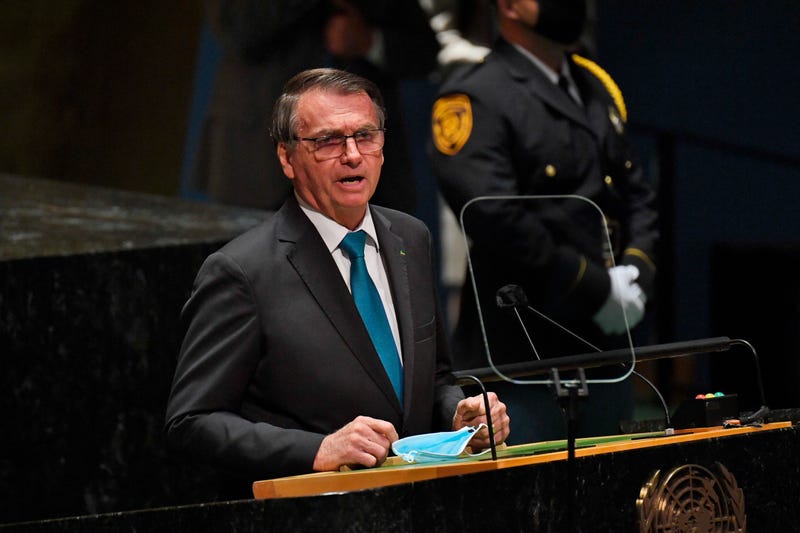 His presence at the General Assembly itself was something of a provocation, as he flouted the requirement for all attendees to be vaccinated against COVID-19. Infected with the virus last year, he has said several times over the last week he remains unvaccinated and that getting a shot is a personal, medical decision.

“By November, everyone who chooses to be vaccinated in Brazil will be attended to," Bolsonaro said in his speech. “We support vaccination. However, our government has opposed vaccine passports or any obligation to get a vaccine.”

He also doubled-down on “early treatment” drugs such as hydroxychloroquine, without naming the drug. The anti-malarial offered initial promise but scientists have roundly dismissed it as ineffective against COVID-19. Hydroxychloroquine was central to the chaos of the pandemic response in Brazil, presided over by four different health ministers, two of whom opposed Bolsonaro's insistence to recommend it.

“We don’t understand why many countries, along with much of the media, positioned themselves against early treatment. History and science will know how to hold all of them responsible,” Bolsonaro added. He also praised the government’s generous COVID-19 welfare program that provided monthly payments to Brazil's poor. Its drawdown, however, fueled poverty.

The right-wing leader is embattled in Brazil as his approval ratings continue tumbling, in large part because the nation has recorded the world's second-highest COVID-19 death toll, with more than 590,000 dead. That's equal to the eighth-highest globally on a per capita basis. And Bolsonaro is more isolated internationally than ever following the electoral defeat of his ally, former U.S. President Donald Trump.

As he seeks to rehabilitate his image abroad, his critics had warned he was undertaking a disingenuous shift. It began at the White House-led climate summit in April, when he moved up the timeline for carbon neutrality by a decade and promised to stop illegal Amazon deforestation by 2030 in a nod to U.S. President Joe Biden, who had called out Brazil’s environmental track record on the campaign trail last year.

Instead, Bolsonaro adopted a defiant tone on Tuesday, hitting talking points similar to those directed toward his base, observed Thomas Traumann, a political analyst.

“He could have given that speech in anywhere in Brazil, and not spent the money to go to New York,” Traumann said.

During his debut General Assembly appearance in 2019, he railed against socialism and what he described as media sensationalism regarding Amazon destruction. Last year, in a pre-recorded video, he said Brazil was the victim of an environmental smear and stressed the economic harm caused by pandemic stay-at-home recommendations.

On Tuesday, he claimed Brazil had been on the verge of socialism before his election, said governors and mayors were to blame for isolation measures that cost workers' income and told assembled diplomats to look beyond media reports about Brazil. He heralded progress in development of railways and sa